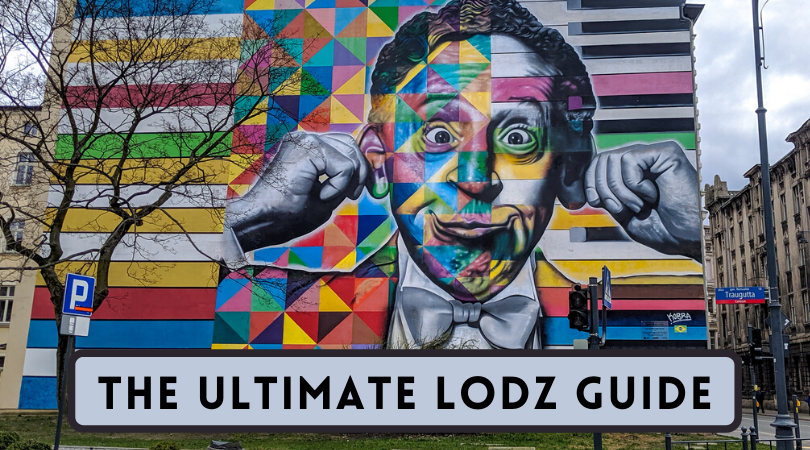 I fell in love with Poland during my first visit back in 2005 and have been back several times since. On my latest trip, while in Warsaw I asked my fellow Poland lovers on Twitter which city I should visit. They overwhelmingly said Lodz so I bought myself a Flixbus ticket from Warsaw and went the following day.

Lodz is Poland’s third largest city after Warsaw and Krakow and is popular with people looking for a budget friendly destination. While Lodz can be overlooked as a destination worth visiting in Poland, it most definitely should be on your list of places to visit in Poland. There are a lot of cool things to do in Lodz that no matter what your interests are, there will be plenty to enjoy.

How to Pronounce Lodz

When I was about to get on my Flixbus to Lodz the driver asked where I was going as the bus had multiple stops and he was putting baggage on according to destination. I said Lodz in the English way of pronouncing it, similar to the English word ‘lodge’ and his confused face instantly felt me with shame as I realised I pronounced it very wrong.

How to get to Lodz

The Lodz Wladyslaw Reymont Airport is the closest airport to Lodz and is located just 6km outside the city center. Getting to the city centre from the airport is quick and easy. By bus it takes 15 minutes and by train it takes 10 minutes.

If you’re planning on spending a few days in Warsaw first like I did you can easily get to Lodz from the Warsaw centre without having to go back to the airport. I used Flixbus which departed from Warsaw West Station and took 2 hours. There is also a direct train to Lodz from Warsaw Central Station that takes 1 hour and 20 minutes. 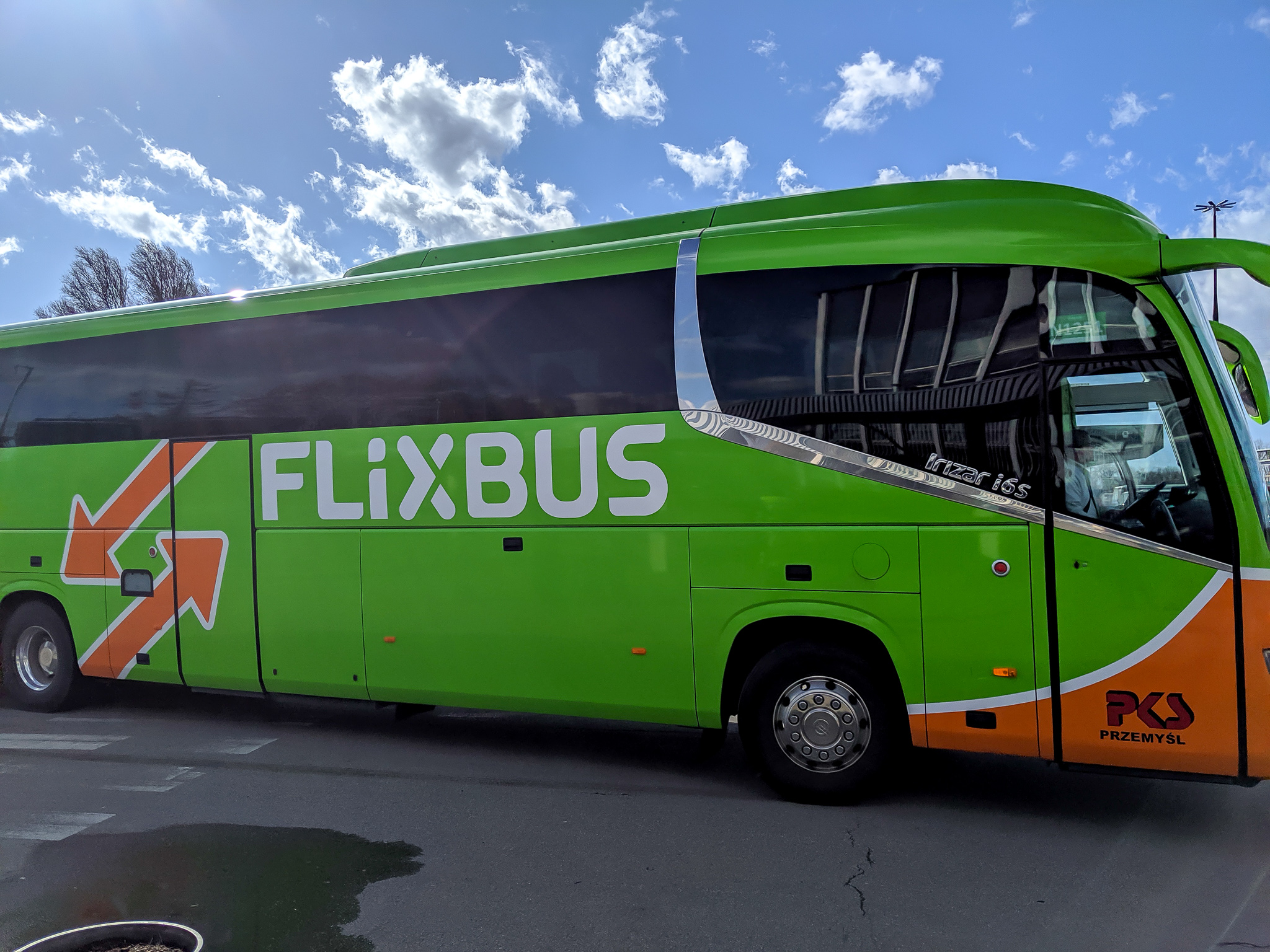 Things to do in Lodz 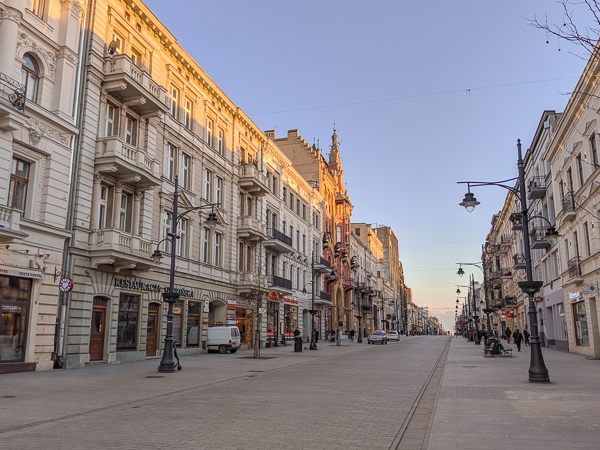 Lodz is probably most famous for its colourful street art. In 2009 the Urban Foundation launched its revitalisation initiative and now the streets have been brightened up with some incredible street art. Their aim was to improve the image of Lodz, which had been nicknamed ‘Grey Lodz’ while also supporting and promoting independent art projects. Simply by walking around you’ll spot many colourful pieces dotted around the city.

The most famous street art in Lodz is probably the Arthur Rubenstein Mural which was created by Brazilian artist Kobra in 2014. 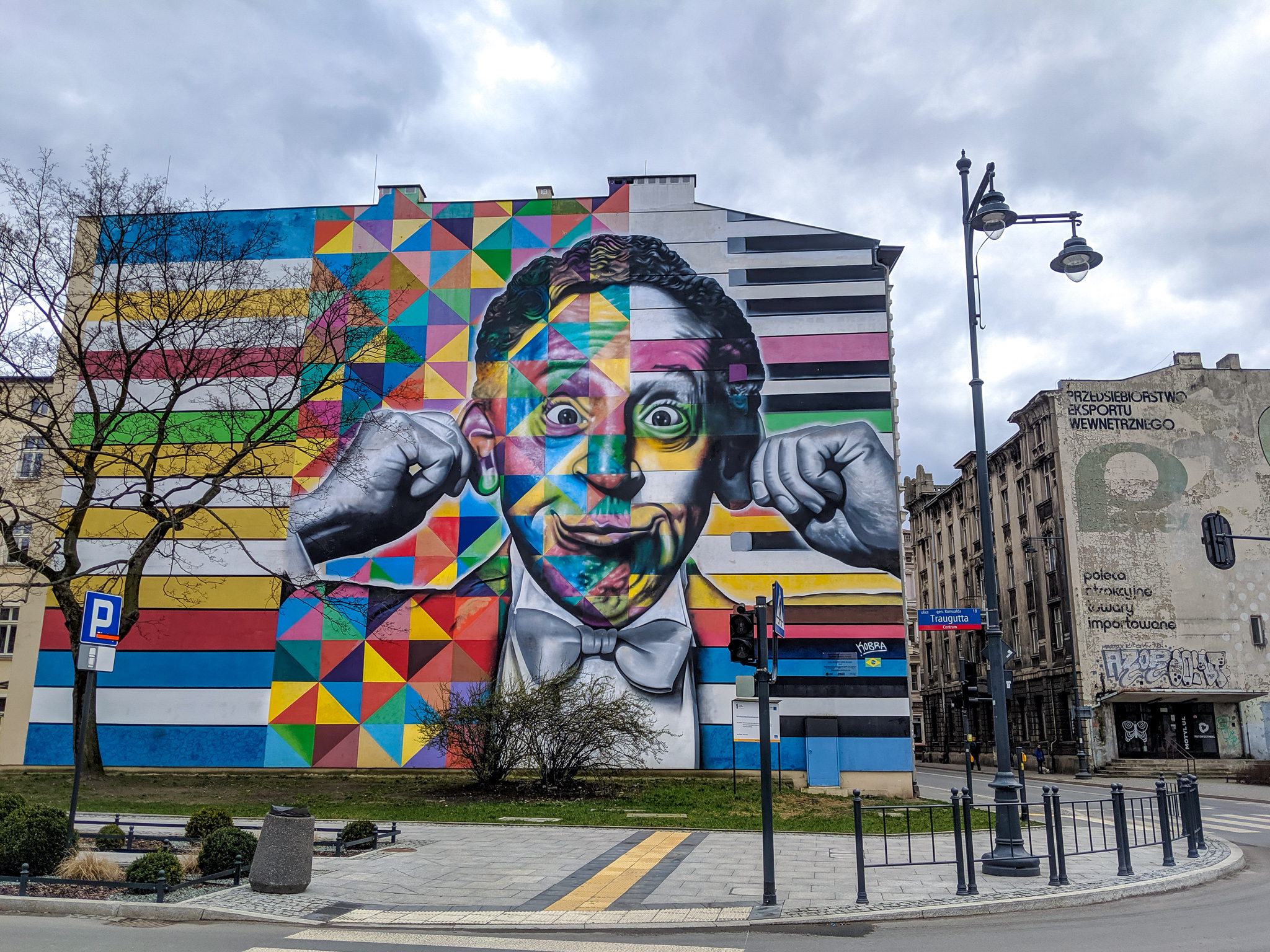 If you like street art then you’ll also want to check out the marvelous mirror installation created by Joanna Rajkowska. She spent an impressive two years taking irregular pieces of broken mirror and transforming a previously brown alley into a work of art. Located at 3 Piotrkowska street, Rosa’s Passage is best enjoyed on a sunny day. 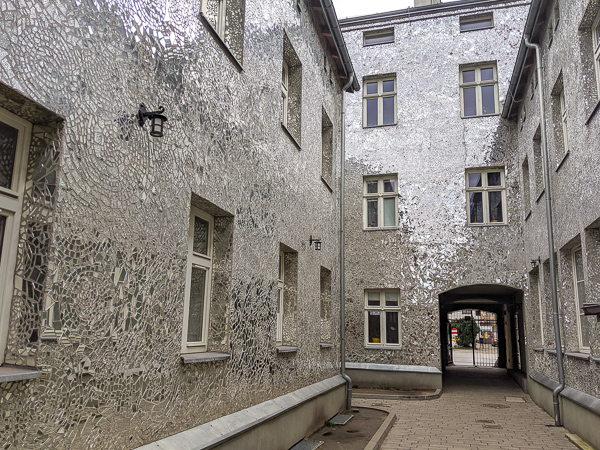 A stop at Manufaktura shouldn’t be missed while visiting Lodz. The place was once factory buildings until it fell into despair and had to close.The area was reopened in 2006 as Manufaktura, a shopping and leisure complex plus art centre all rolled into one. Not only do you get a sense of going back in time walking around here but there are bars, restaurants, a cinema, bowling alley and so much more! 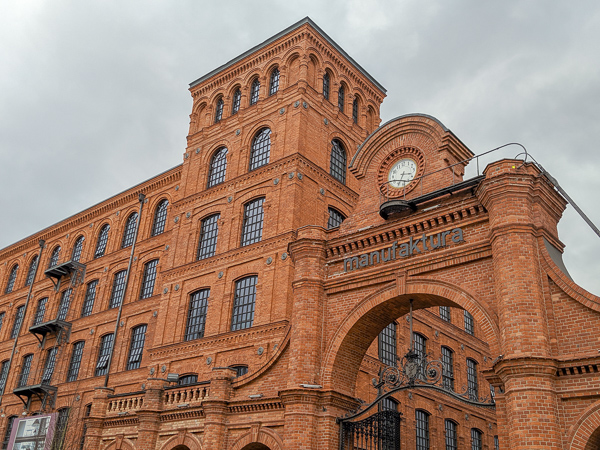 Located within Manufaktura near the cinema, The Factory Museum is small in size but full of history. Inside you’ll learn about the rich history of textile manufacturing in Lodz, with old machines on display and lots of photographs. Admission is 10zl which is about £2 / $2.50.

Located next door to Manufaktura is MS2, the modern art gallery of Lodz. Inside you’ll find contemporary art from all around the world. With three floors to explore, MS2 is packed full of artwork and even features work from Pablo Picaso and Paul Klee. 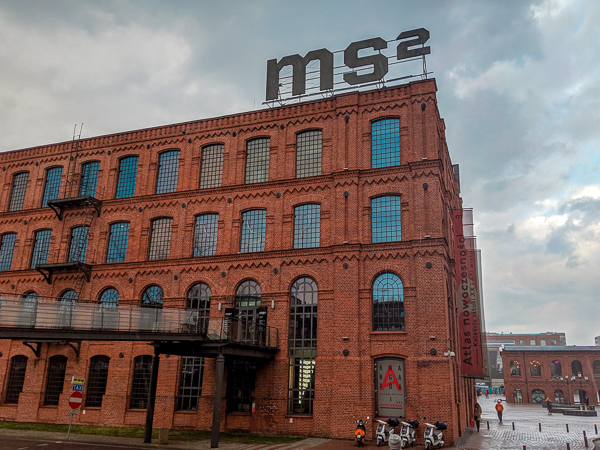 The futuristic complex EC1 is one of the newest buildings in Lodz and is home to the EC1 Planetarium and the Centre for Science and Technology. The EC1 Planetarium is the most modern planetarium in Poland and in Central Eastern Europe. Under the dome is an impressive 14 metre spherical 8k resolution screen used for the shows. Under the dome are 110 comfortable armchairs. Tickets to the Planetarium shows cost 18zl (£3.60 / $4.50) on weekdays and 20zl (£4 / $5) on weekends. 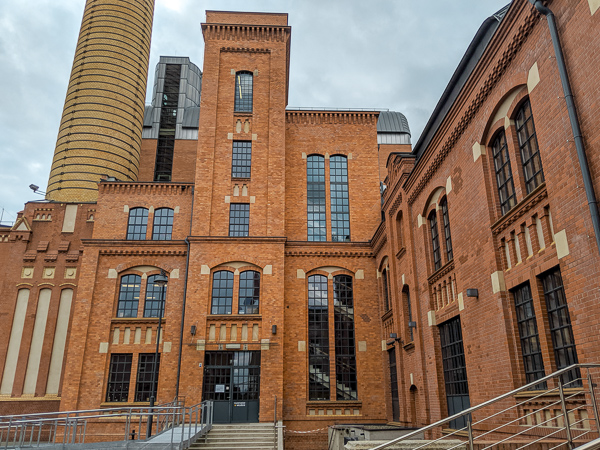 Due to its manufacturing industry Lodz was once home to the largest jewish population in Poland. In fact, nearly a third of the residents were Jewish. The Jewish Cemetery in Lodz is one of the largest in the world and has about 180,000 marked graves. The Survivors Park stands as a place of remembrance.

During World War II, the small Radegast train station was used by the Nazis to move Jewish people to concentration camps. The old train station has now been turned into a museum and memorial to mourn those thousands who passed through.

Izrael Poznanski was incredibly rich and one of the most powerful Barons during the manufacturing boom. Along with his son, Poznanski built the incredible palace at the turn of the twentieth century. Today the palace is open for people to be able to wander around the rich interiors and picture what life must have been like living there. 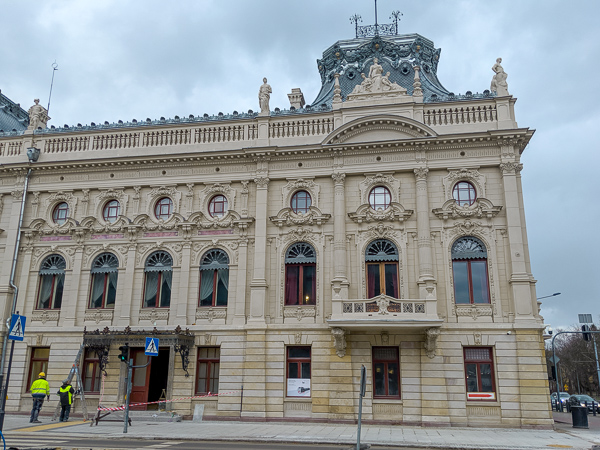 The Detka Canal Museum has to be the quirkiest thing to do in Lodz. The sewers closed in the 1970s and were reopened in 2008. Visitors are able to tour the sewers and explore life underground Lodz. It’s worth noting the tunnel height is 1.87 metres so keep that in mind before booking. Tours are only available between May to October. Admission is 5zl (£1 / $1.25)

As the name would suggest OFF Piotrkowski is just off of Piotrkowski street. While small in size, this courtyard is the trendy, creative area of Lodz. Inside you’ll find designer and architect companies as well as several restaurants, bars and boutique shops. 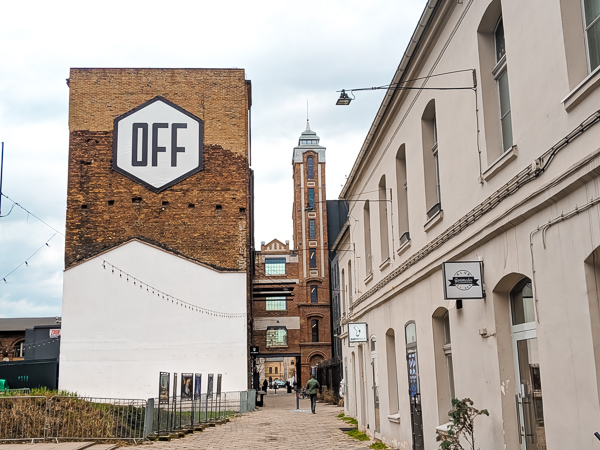 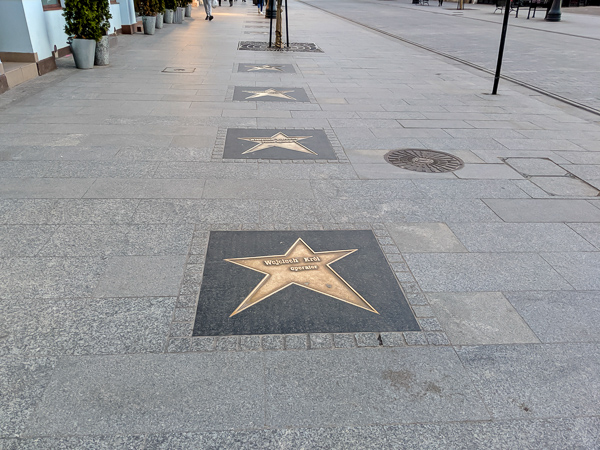 With its National Film School, Lodz was seen as the place to study for anyone wanting to get into filmmaking in Poland. The museum is located in the former palace of textile manufacturer Karol Scheibler. Visitors can see old film equipment and learn about the filmmaking history of Poland. Admission is 10zl (£2 / $2.50)

There are lots of places to rent a bike in Lodz which is handy as the main street, Piotrkowska Street, is 4km long. Renting a bike is a fun way to explore Lodz and helps you get to attractions quicker. 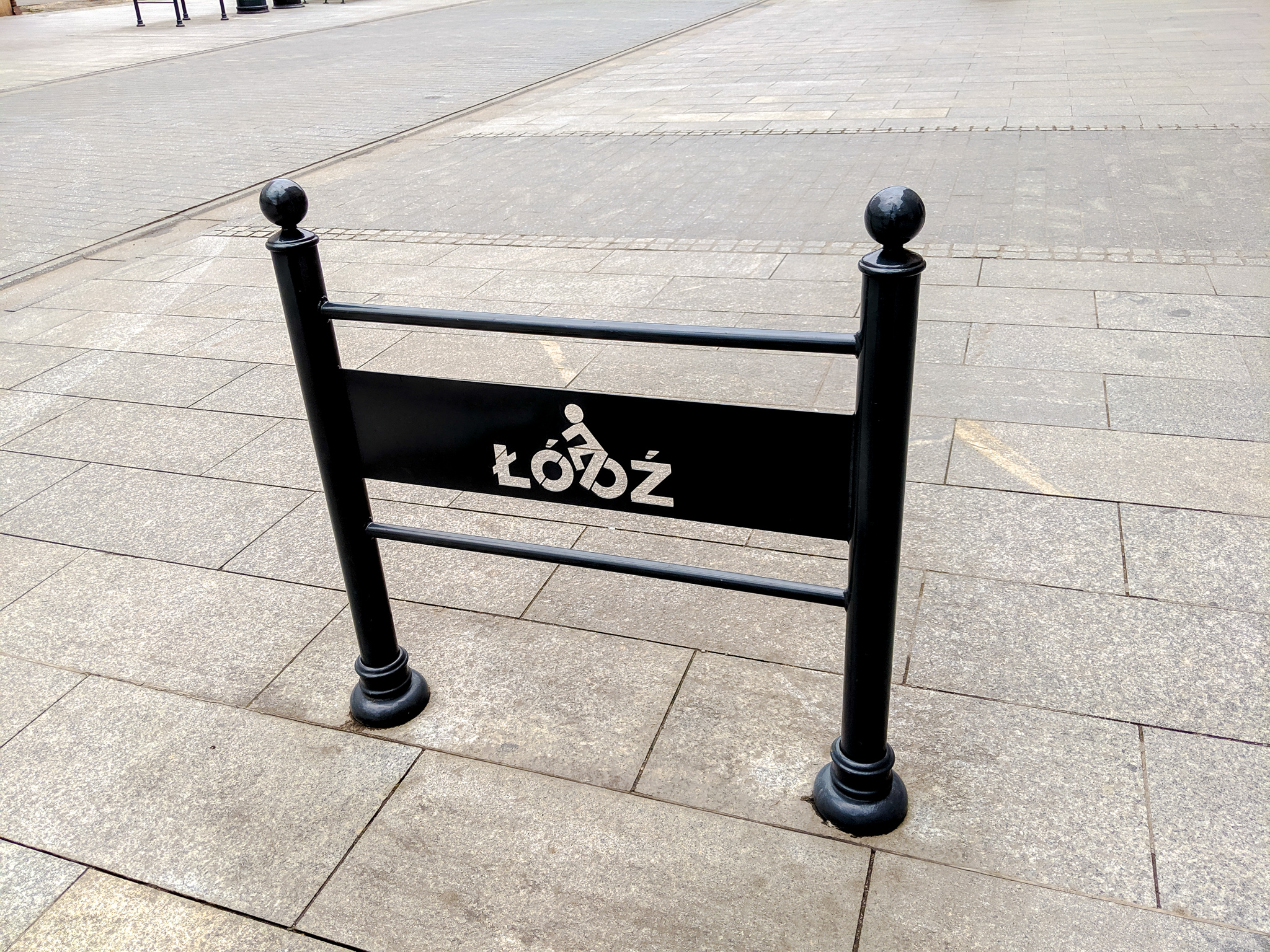 On a hot day there’s no better place to be in Lodz than the Aquapark. The park has several indoor and outdoor pools with slides and wave machines. There are also salt baths, a steam room and a Finnish sauna so it has something for the whole family. All day tickets can be purchased or if you’d prefer a shorter visit, 1, 2 & 3 hour tickets are also available. Ticket prices range from 23-61zl for pool tickets and 35-90zl for pool and sauna tickets.

The Alexander Nevsky Cathedral is a stunning orthodox church built in the late 19th Century when Poland was part of the Russian Empire. The interior is equally as gorgeous as the exterior. Admission is free. 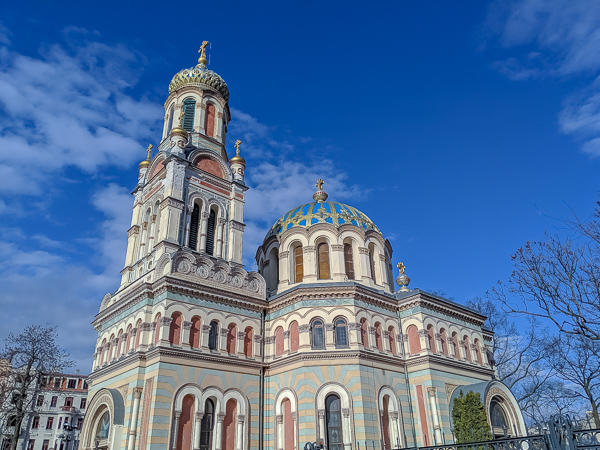 Also known as Lodz Cathedral, this is the biggest church in Lodz. The gothic masterpiece was built between 1901 and 1912 but was sadly destroyed by fire in 1971. Thankfully it was restored so it can still be enjoyed. 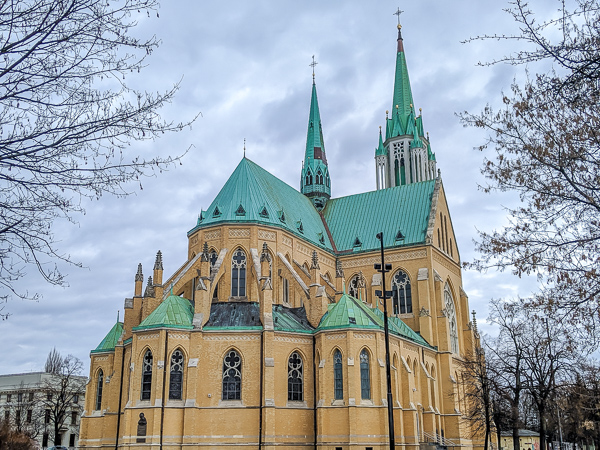 Built between 19009 and 1928, St Matthew’s was the first Lutheran church in Lodz. In 1971 the church became a listed building and joined the Polish Heritage Register. What draws attention to the church are the galleries of churchgoers which are situated on the three sides of the main aisle and the chandelier with 241 lights. 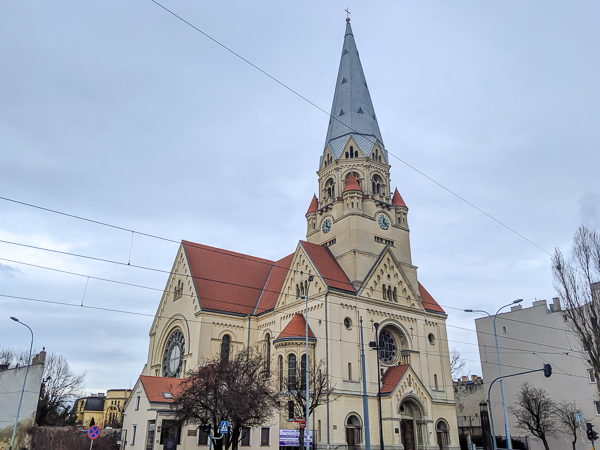 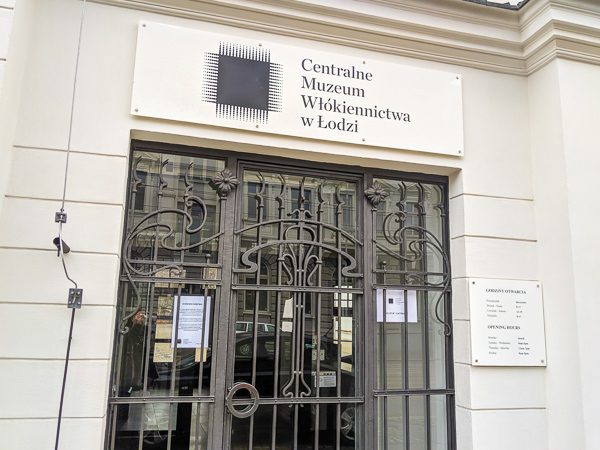 Located in the oldest pharmacy in Lodz, the Museum of Pharmacy has been built to resemble a pharmacy from the 19th century. Admission costs 6zl (£1.20 / $1.50) 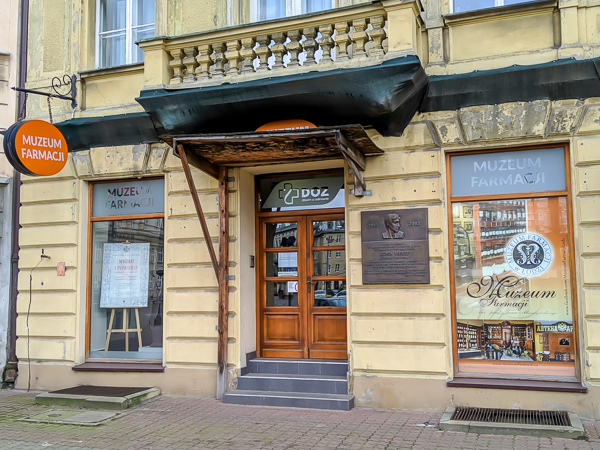 Escape rooms are becoming popular all over the world and Lodz is no exception. Exit Room is located on Piotrkowski Street and offers three different experiences; Alice in Wonderland, Redrum and Matrix. Games last 60 minutes and cost 100zl (£20 / $25) 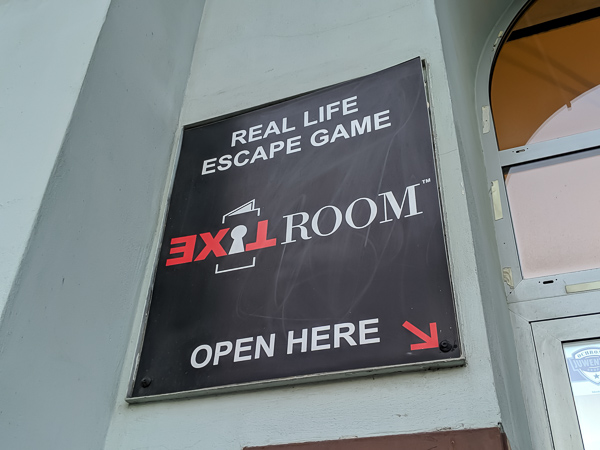 My favourite place to come for breakfast in Lodz was The Brick Coffee Factory. If you love coffee you’ll want to visit as they have a wide variety of amazing coffees to choose from. 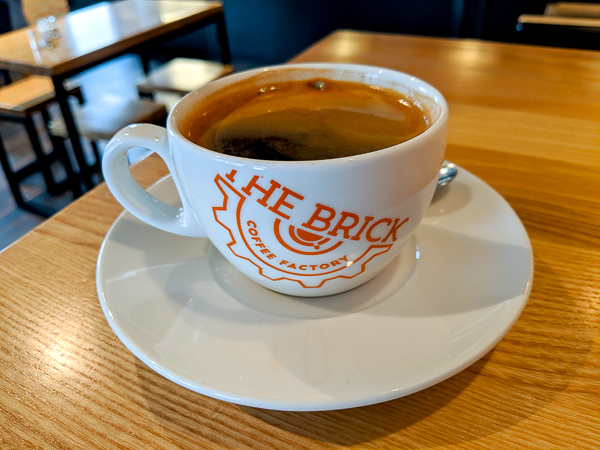 A lovely cafe for breakfast with a view set breakfasts on the menu. Also a great spot for lunch with pizzas, pasta, bagels, salads and soups. The bread is freshly made in their bakery and the portion sizes are very generous. 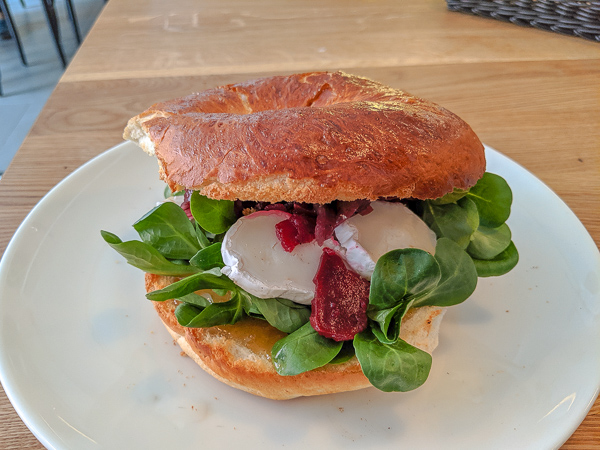 Hidden at the end of a courtyard, this is a great restaurant if you’re looking for traditional family style Polish food. Not only is the food delicious, it’s fantastic value for money. 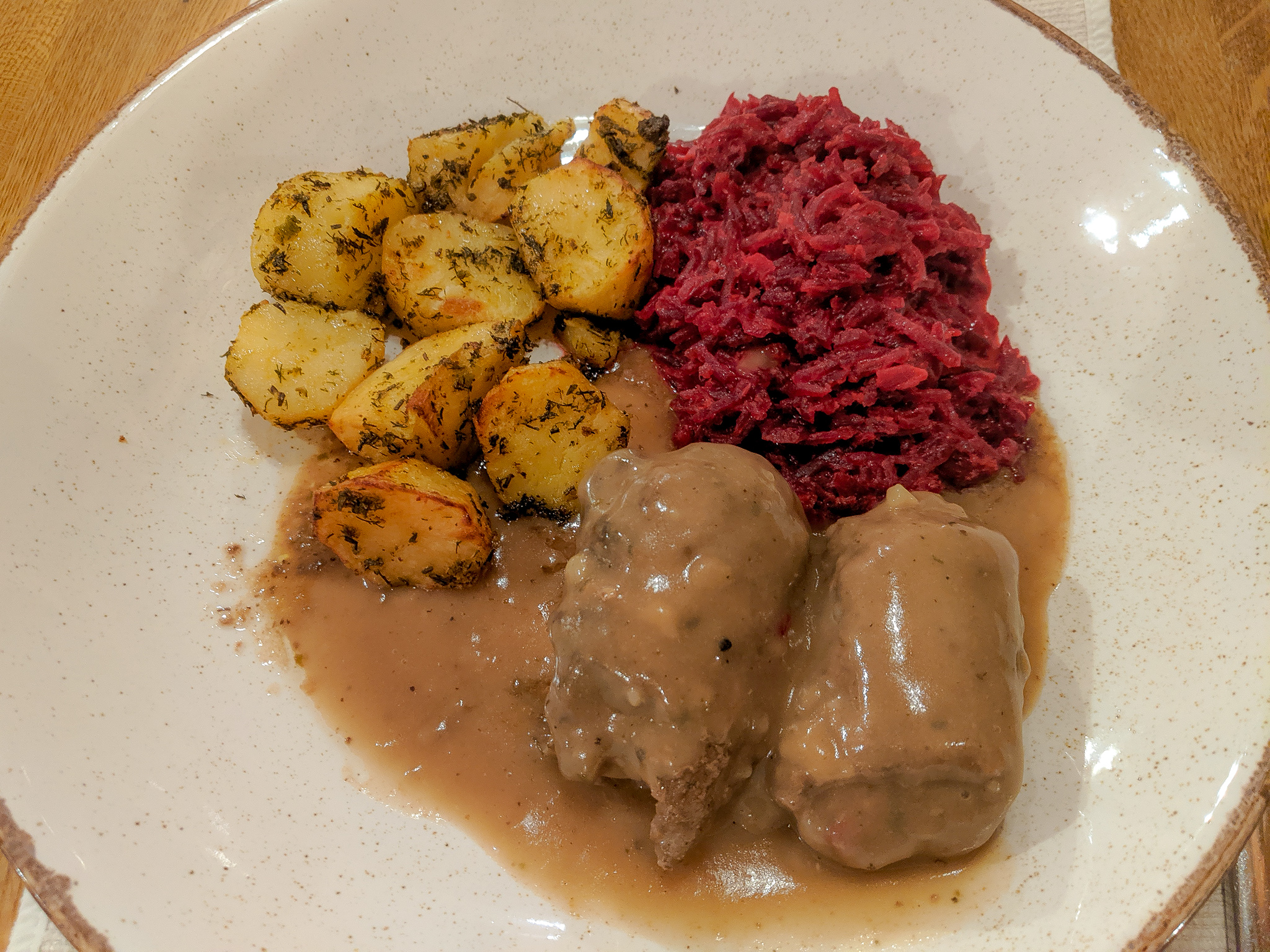 If you’re looking for freshly brewed beer and something to eat, Bierhalle is the perfect place for you. This brewery restaurant chain can be found across Poland. 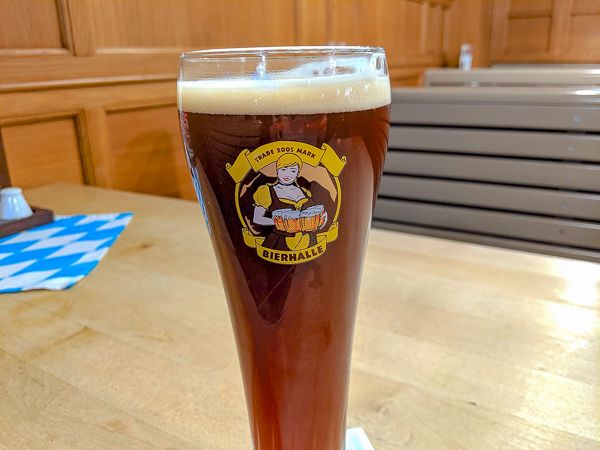 While I do love Polish food, sometimes I can’t resist an Italian meal. I had heard great things about Angelo Ristorante and I was not disappointed. This is a great place to go to if you’re looking for Italian food in Lodz. 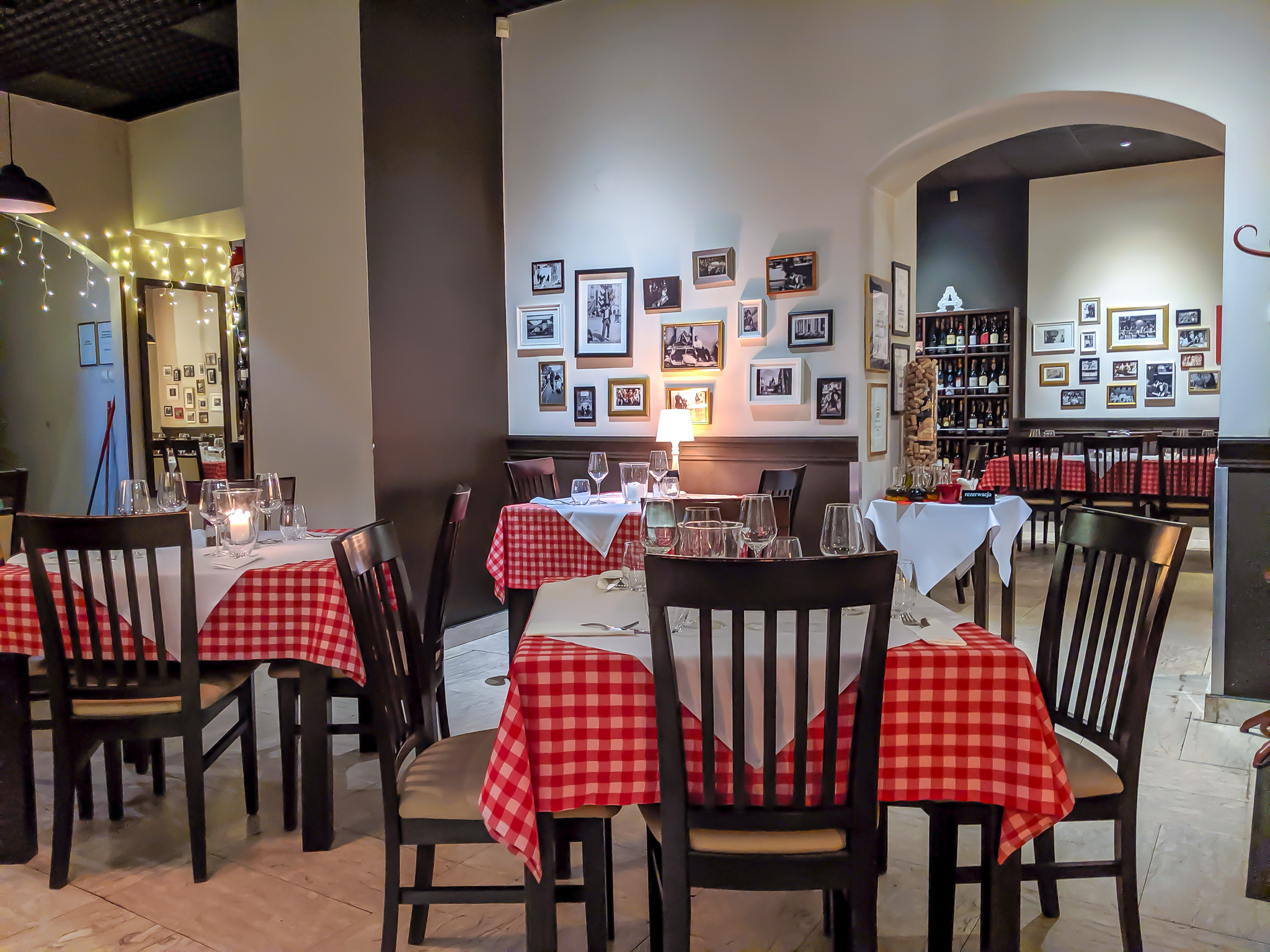 Where to Stay in Lodz

While I was in Lodz I stayed at the budget friendly B&B Hotel Lodz Centrum. Just behind Piotrkowska Street this is a great option if you’re looking for a cheap hotel in a great location. For more hotel options in Lodz click here 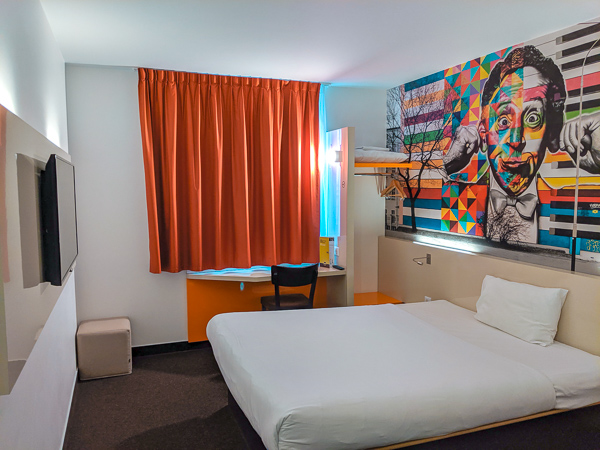 There you have it, 22 cool things to do in Lodz. Plus how to get there, where to stay and where to eat. Have you been to Lodz? Is there anything missing from the list? Let me know in the comments below!

Need more inspiration for your trip to Poland? Why not check these out: 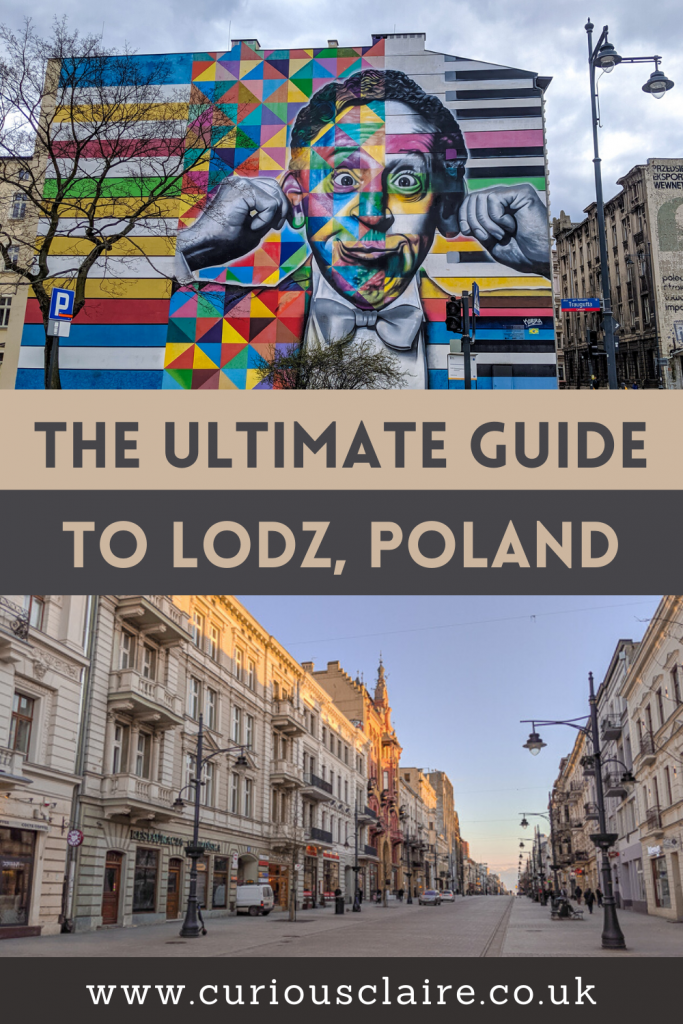 Why You Should Visit Lublin, Poland
A Relaxing Stay at Sheraton Grand Krakow
A Guide to Zamosc, Poland’s hidden delight
Polish Castles: The 12 Best Castles in Poland