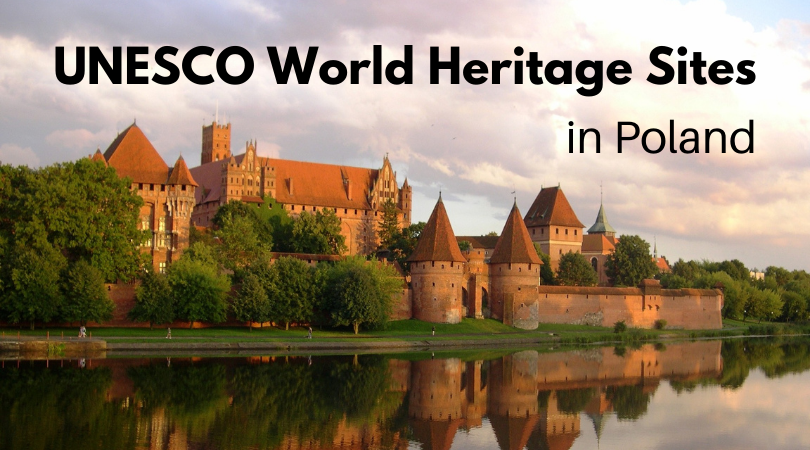 It’s been no secret that I absolutely love Poland. I’ve been visiting and exploring all over the country for several years and I still have so many more incredible places to visit. Poland is one of those countries I’ll never get tired of visiting.

Not only is there great food and beer, Poland currently has 16 sites classed as UNESCO World Heritage Sites; 15 cultural sites and 1 natural site. All of them are incredible and worth checking out. If you’ve been to Poland there’s a good chance you’ve already been to one!

Zamosc was founded back in the 16th century by the chancellor Jan Zamoysky and was added to the UNESCO world heritage list in 1992. Built by the architect Bernando Morando, Zamosc was modelled on Italian theories of the ‘ideal city’ and is the perfect example of a late-16th century Renaissance town.

The old town has retained its original street layout, the fortress and even a large number of the original buildings which show a blending of Venetian and central European architectural traditions. The most prominent building is the Town Hall but your eyes will also be drawn to the colourful Armenian houses next door. 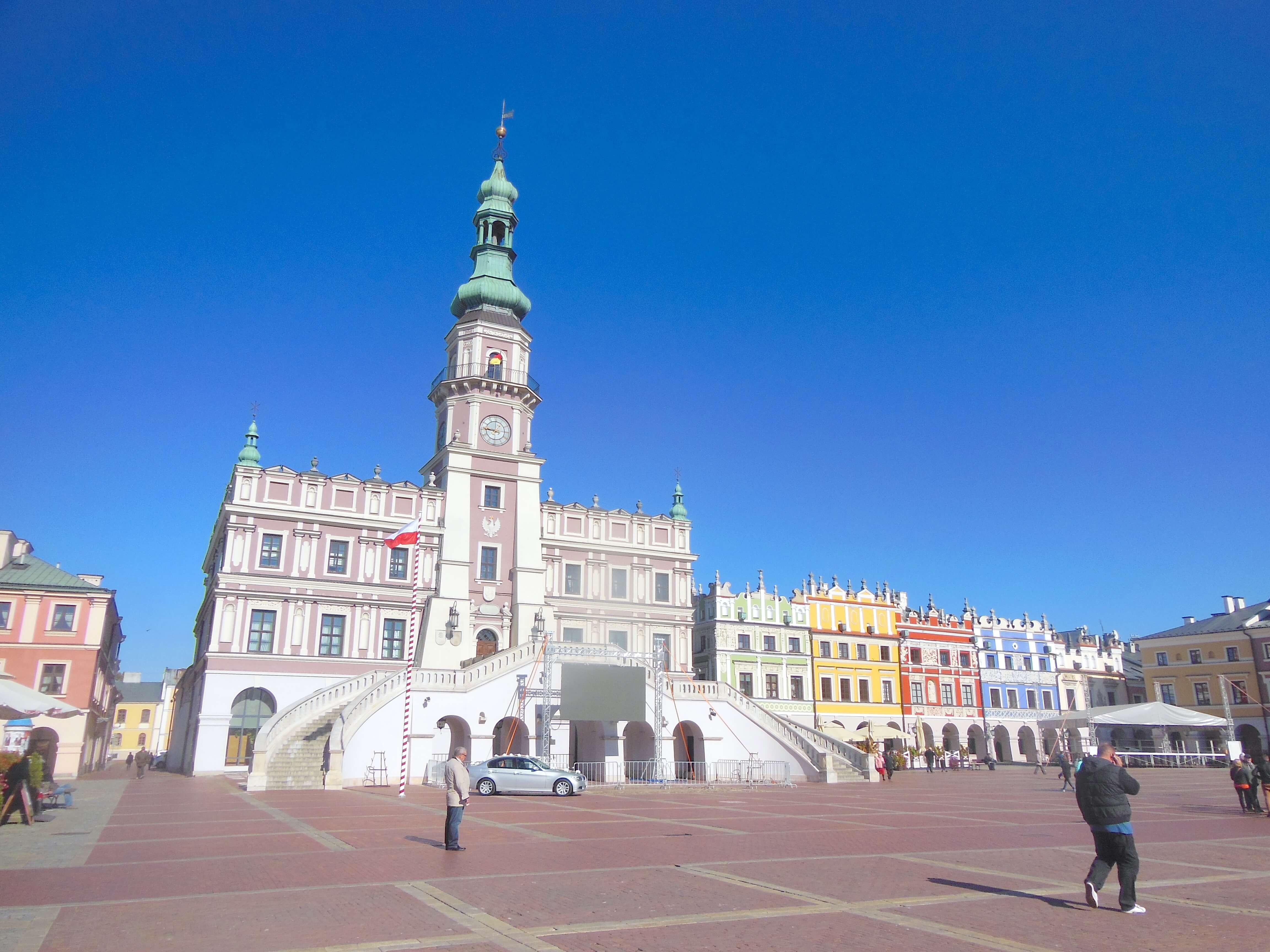 Read Also: What To See & Do in Zamosc

While there are many wooden churches in Southern Poland, it’s the six best preserved and oldest Gothic churches that were entered on the UNESCO World Heritage site in 2003. These churches were sponsored by noble families and became status symbols.

The six churches are located in the towns and villages of Blizne, Binarowa, Dębno Podhalańskie, Haczow, Lipnica Murowana and Sekowa. These are all located in the historic region of Malopolska in southern and south-eastern Poland.

Arguably one of the greatest castles in Europe, the castle of the Teutonic Order in Malbork became a World Heritage Site in 1997. The 13th-century fortified monastery belonged to the Teutonic Order and was enlarged when the seat of the Grand Master moved there from Venice. The castle is a classic example of a medieval fortress and lucky for visitors, it has been restored both in the 19th and early 20th centuries.

Now a castle museum, visitors can enter the stunning Malbork Castle to see the grand interior as well as walk around the impressive grounds. Tours cost 60 PLN (about €9) and you should give yourself at least 2 hours to enjoy the castle, although you’ll probably want to give yourself 3 hours. 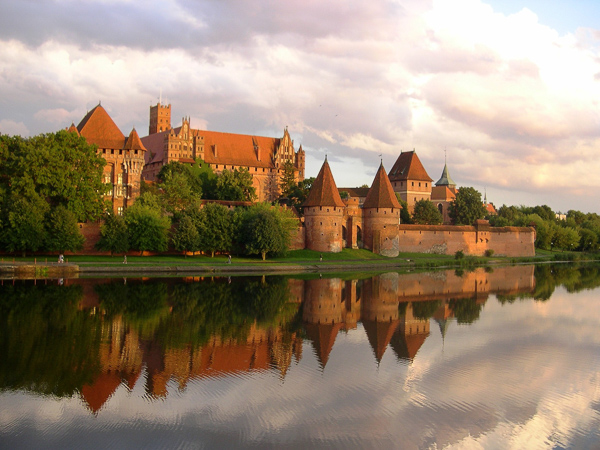 The Bialowieza Forest is located on the border between Poland and Belarus. It is named after the Polish village of Bialowieza which is located in the middle of the forest and was probably one of the first human settlements in the area.

The Bialowieza National Park was added to the World Heritage Lust in 1979 and then was extended to include Belovezhskaya Pushcha, Belarus in 1992 before extending even further in 2014.

The Historic Centre of Krakow is the former capital of Poland and has been on the World Heritage list since 1978. This beautiful 13th-century merchant’s town is home to Europe’s largest market square as well as many magnificent palaces and churches.

The historic centre includes the Old Town, Kazimierz and the Wawel Castle. In the evenings you can enjoy views of the Wawel Castle and the Wisla River at sunset from the Sheraton Grand Krakow rooftop bar. 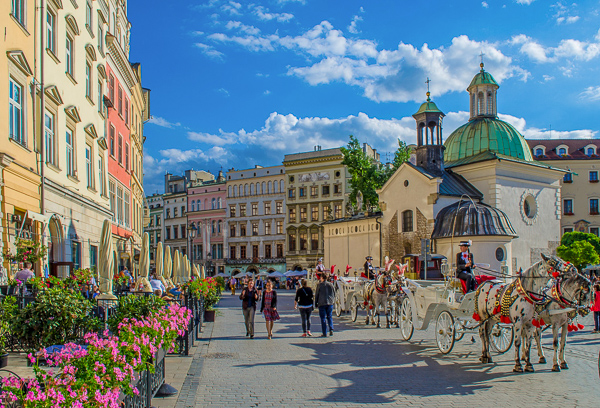 The latest addition in the UNESCO World Heritage List for Poland, added in just 2019, Krzemionki is an ensemble of four mining sites. They date back from the Neolithic to the Bronze Age (about 3900 to 1600 BC) and were used to mine flint for axe-making.

Now an archeological museum and nature reserve, the tourist trail of the mine is the only one of its kind. Approximately 1.5km long, tourists can visit the original excavation sites and shaft pits from 5,000 years ago and it only costs 12-18 PLN (less than €4).

Warsaw, or Warszawa in Polish, is the capital and largest city of Poland. It’s historical Old Town was designated a UNESCO World Heritage site back in 1980. During the Warsaw Uprising in 1944, more than 85% of the historic centre was destroyed and reduced to ruins by Nazi troops. Then after the war, a five-year reconstruction campaign by its citizens resulted in today’s meticulous restoration of the Old Town.

The highlights of the Old Town are the Royal Castle, Museum of Warsaw, the Warsaw Mermaid statue and exploring the Old Town Cellars Route. Or simply take a stroll and admire the incredible architecture. The Old Town is also a great place to sample some delicious Polish pierogi or Polish beers. 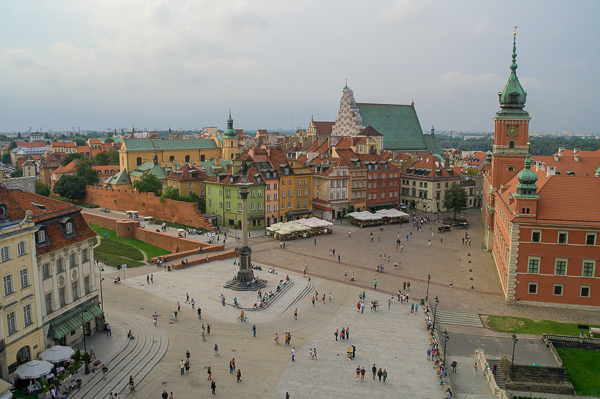 Park Muzakowski, or Muskauer Park, is a landscape park across the Neisse River that borders Poland and Germany. Created from 1815 to 1844 by Prince Hermann von Puckler-Muskau, the park was added to the World Heritage List in 2004. The park pioneered new approaches to landscape design and influenced the landscape architecture in Europe and America.

The park includes the river Neisse, both hand-made and natural water features, as well as beautiful buildings and bridges. Muskauer Park is a great example of how a cultural landscape can be naturally harnessed.

The Royal Salt mines in Wieliczka and Bochnia are located on the same geological rock salt deposit in southern Poland. Situated close together, the two salt mines worked in parallel to each other from the 13th century until the late 20th century.

The Wieliczka Salt Mine became a UNESCO World Heritage Site back in 1978 and then in 2013 the Bosnia Salt Mine (Poland’s oldest salt mine) was also added to the list. Even though they were added separately, the two sister salt mines appear on the World Heritage List together. 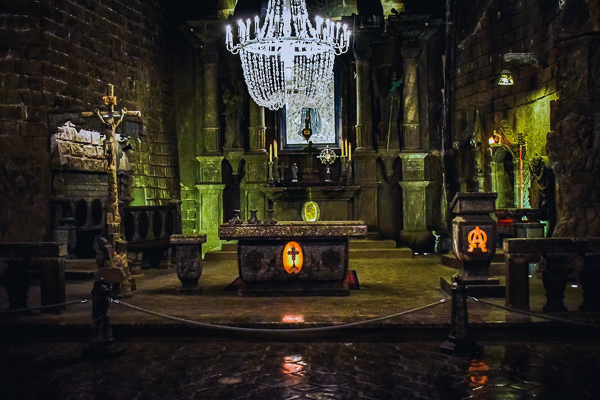 Wooden Tserkvas of the Carpathian Region in Poland and Ukraine

The 16 wooden tserkvas, churches, were built of horizontal wooden logs between the 16th and 19th centuries by communities of Orthodox and Greek Catholic faiths. Located within the Polish and Ukranian Carpathian mountain range, these wooden churches are an outstanding example of the ecclesiastical timber-building tradition in the Slavic countries.

Torun, located in the north of the country, is one of the oldest cities in Poland. The first settlement here dates back to the 8th century and then was expanded by the Teutonic Knights in the 13th century. Torun has been a UNESCO World Heritage Site since 1997.

The Old Town is a remarkably well preserved example of a medieval European town and is simply beautiful to walk around. The highlights are the city fortifications, the castle ruins, the cathedral, and also the Gothic house (now museum) where Copernicus was supposedly born. 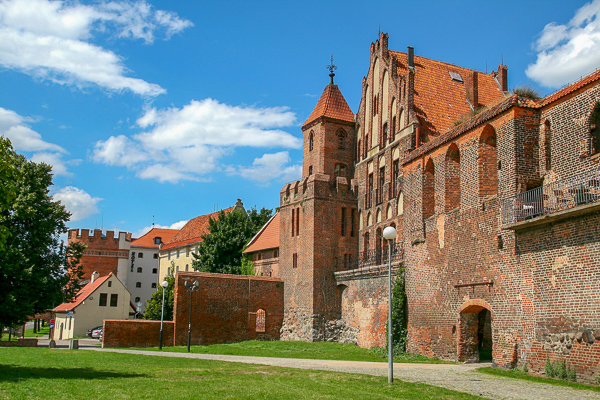 Located in southern Poland, the Tarnowskie Gory Lead-Silver-Zinc Mine and it’s underground water management system was added to the UNESCO World Heritage Site in 2017. The site was one of the main mining areas of central Europe, with most of it being situated underground.

The mine is open to tourists for guided tours but for tours in any other language than Polish make sure to book in advance. Tours start at the museum before heading down to visit the corridors dating back to the 18th and 19th centuries.

The Centennial Hall is a historical building in Wroclaw and has been on the Heritage List since 2006. It was designed by architect Max Berg and constructed between 1911-1913. At the time of construction, it was the largest ever reinforced concrete dome in the world.

The Centennial Hall is not in the centre of Wroclaw but can easily be reached by tram. It’s open for events, exhibitions, shows and concerts. You can take a tour of the Centennial Hall and surrounding areas which includes the Japanese Garden next door. 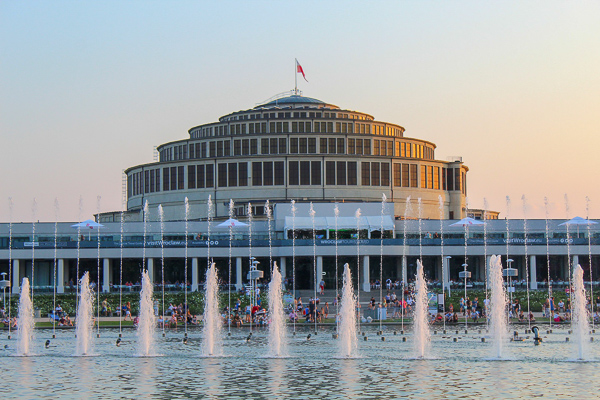 Kalwaria Zebrzydowska is a town in southern Poland about 40km from Krakow. The Mannerist Architectural and Park Landscape Complex and Pilgrimage Park, located near the town, dates back to the first half of the 17th century and was added to the World Heritage List in 1999.

Within its natural setting are a series of symbolic places of worship that relate to the Passion of Jesus Christ and the life of the Virgin Mary that have remained virtually unchanged. The complex consists of a monastery as well as a number of churches, chapels and other architectural structures.

Churches of Peace in Jawor and Swidnica

The Churches of Peace can be found in Jawor and Swidnica in south-western Poland. There was a third Peace Church in Glogow but this sadly burned down in 1758. The two surviving Peace Churches were added to the World Heritage List in 2001.

The churches were built in the 17th-century and are the largest timber-framed religious buildings in Europe. By car, the two churches are less than an hour apart so it’s easy to visit both on the same day.

Probably the most famous Polish site on the UNESCO World Heritage List is Auschwitz Birkenau, which was added back in 1979. Known worldwide for being the former German Nazi Concentration Camp used through 1940 to 1945, the site is now a museum and memorial to the murdered and tortured Jews, amongst others, who were sent to the camp. 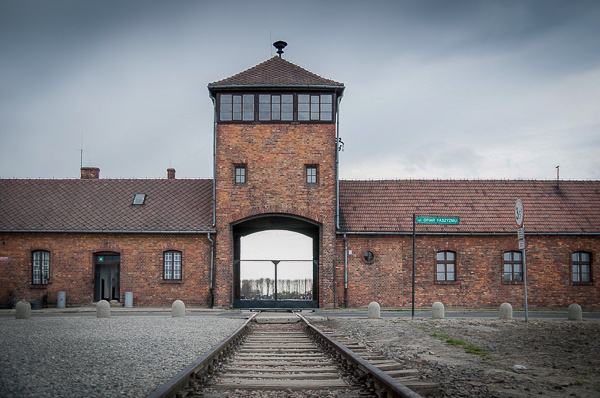 How many of these UNESCO World Heritage Sites have you been to in Poland? Which ones do you want to visit on your next trip to Poland?

Need more inspiration for your trip to Poland? Why not check these out: 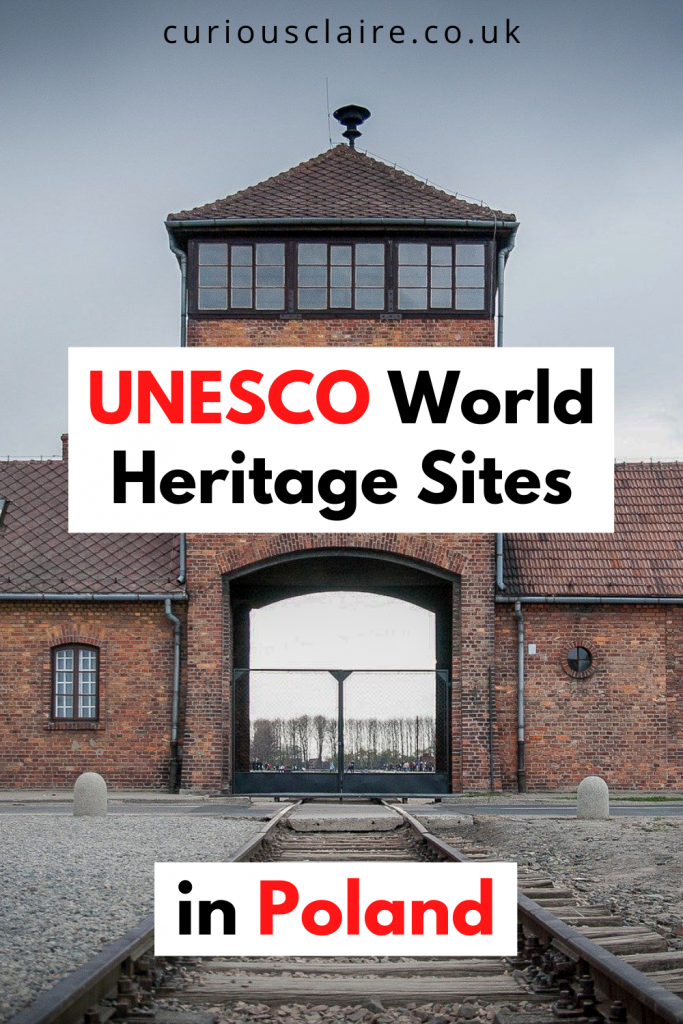 16 Beautiful And Famous Bridges in Europe
A Guide to Zamosc, Poland’s hidden delight
The Ultimate Guide to Cat Cafes in the UK
A Relaxing Stay at Sheraton Grand Krakow