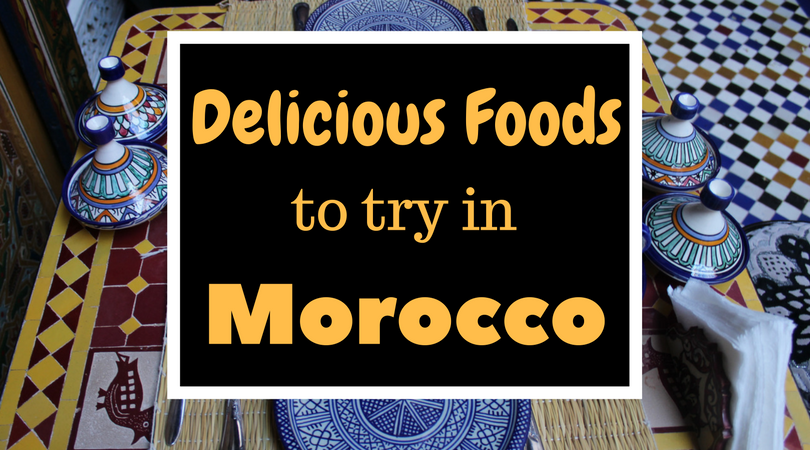 One of my main reasons for wanting to visit Morocco was to finally try authentic Moroccan food and I was certainly not disappointed! Here is my list of delicious Moroccan food I recommend trying when you visit this amazing country.

A tagine is probably the most famous Moroccan dish known. The dish gets its name from the tagine clay pots they are cooked in. Tagines can be seen cooking delicious food all over Morocco containing chicken, beef, lamb, fish and even vegetable only dishes. 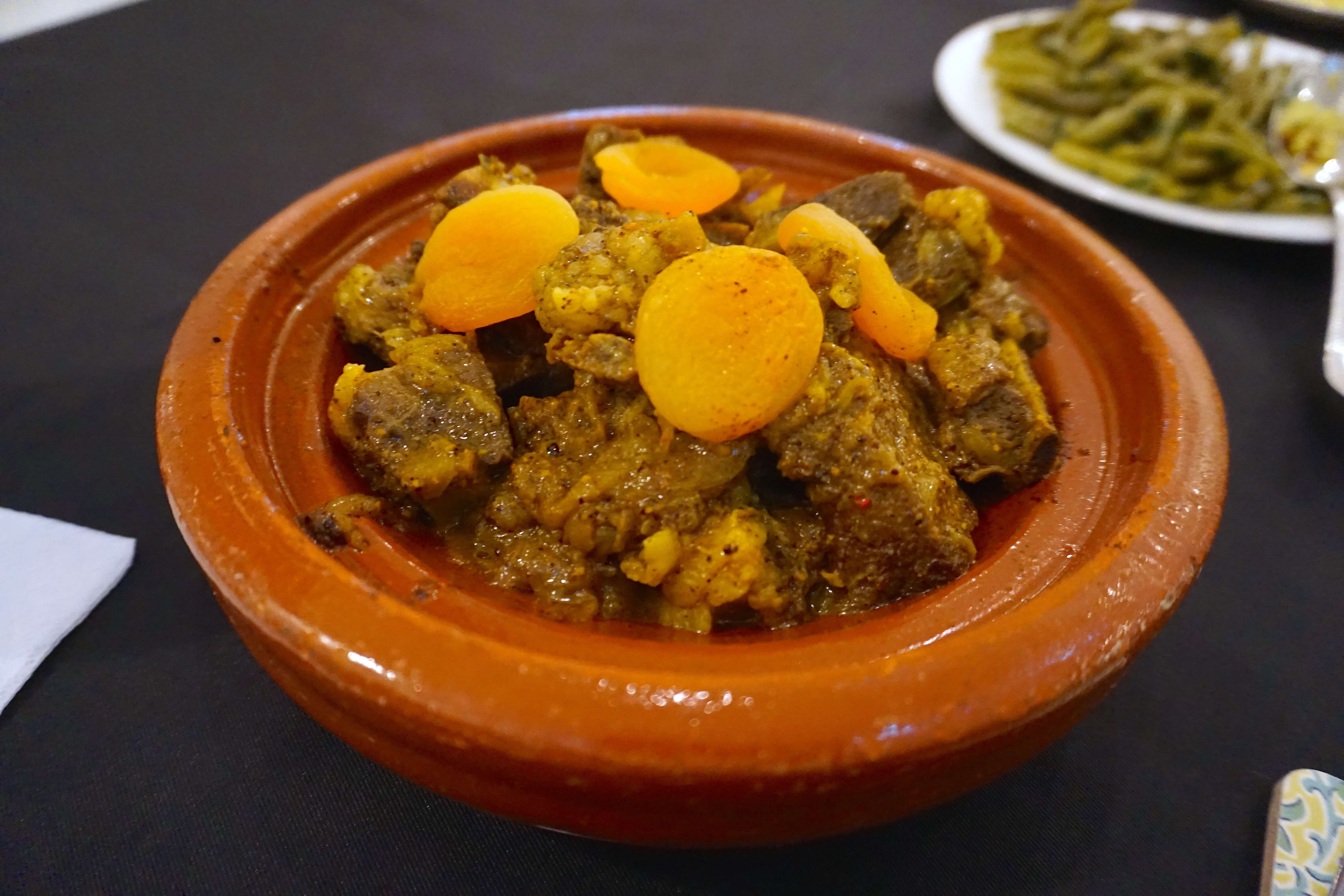 Couscous, or Seksu, is probably the second most well known Moroccan food. It is usually cooked with many spices, the main being cumin. The dish can be served with meat or vegetables. Traditionally in Morocco couscous is only served on a Friday but is widely available in restaurants for tourists to try any night of the week. 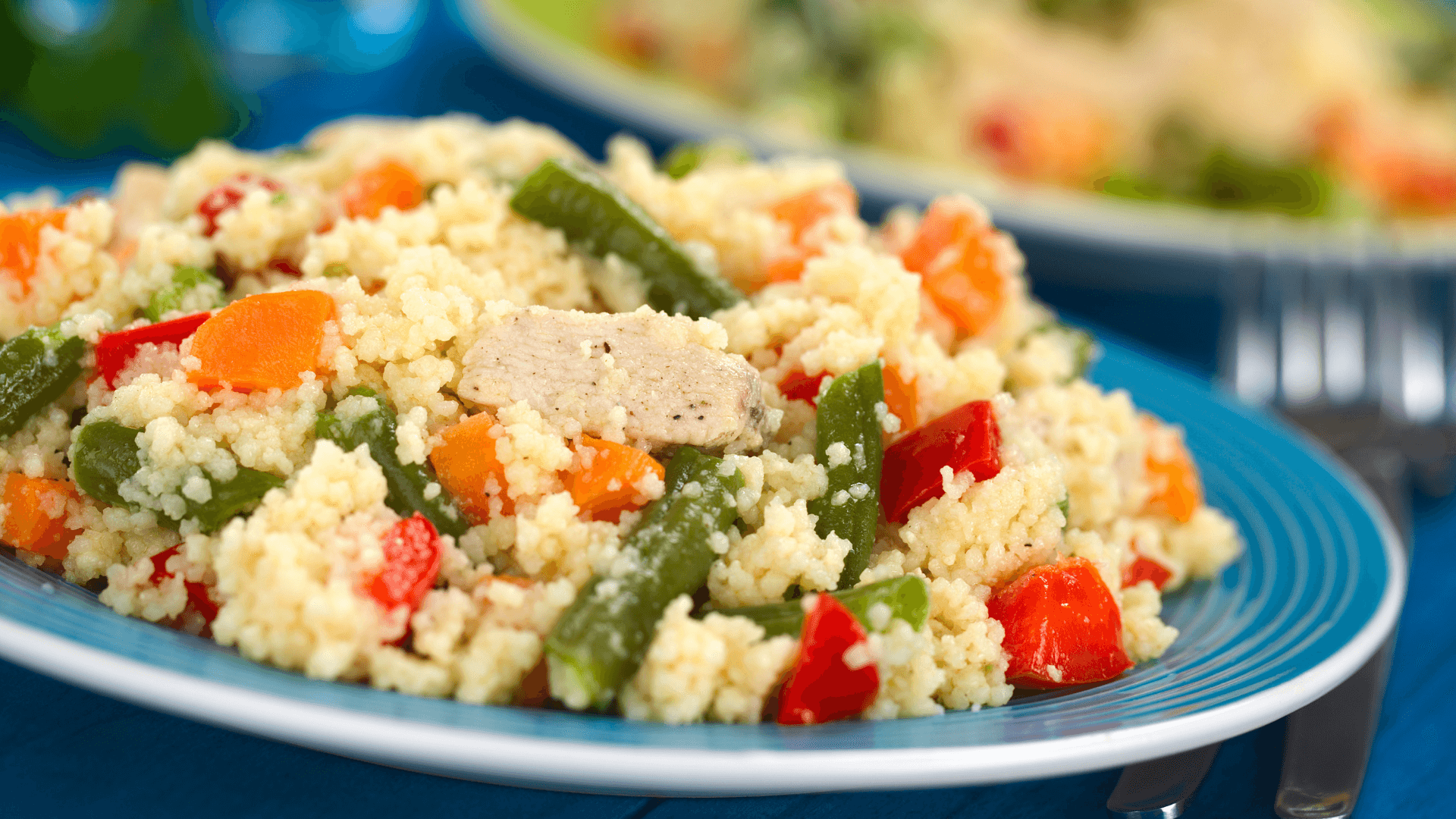 Crusty Bread, or khobz, which is baked in communal wood-fire ovens is an important element of every Moroccan meal. It is traditionally broken up to be used to scoop up food and  to soak up sauce. 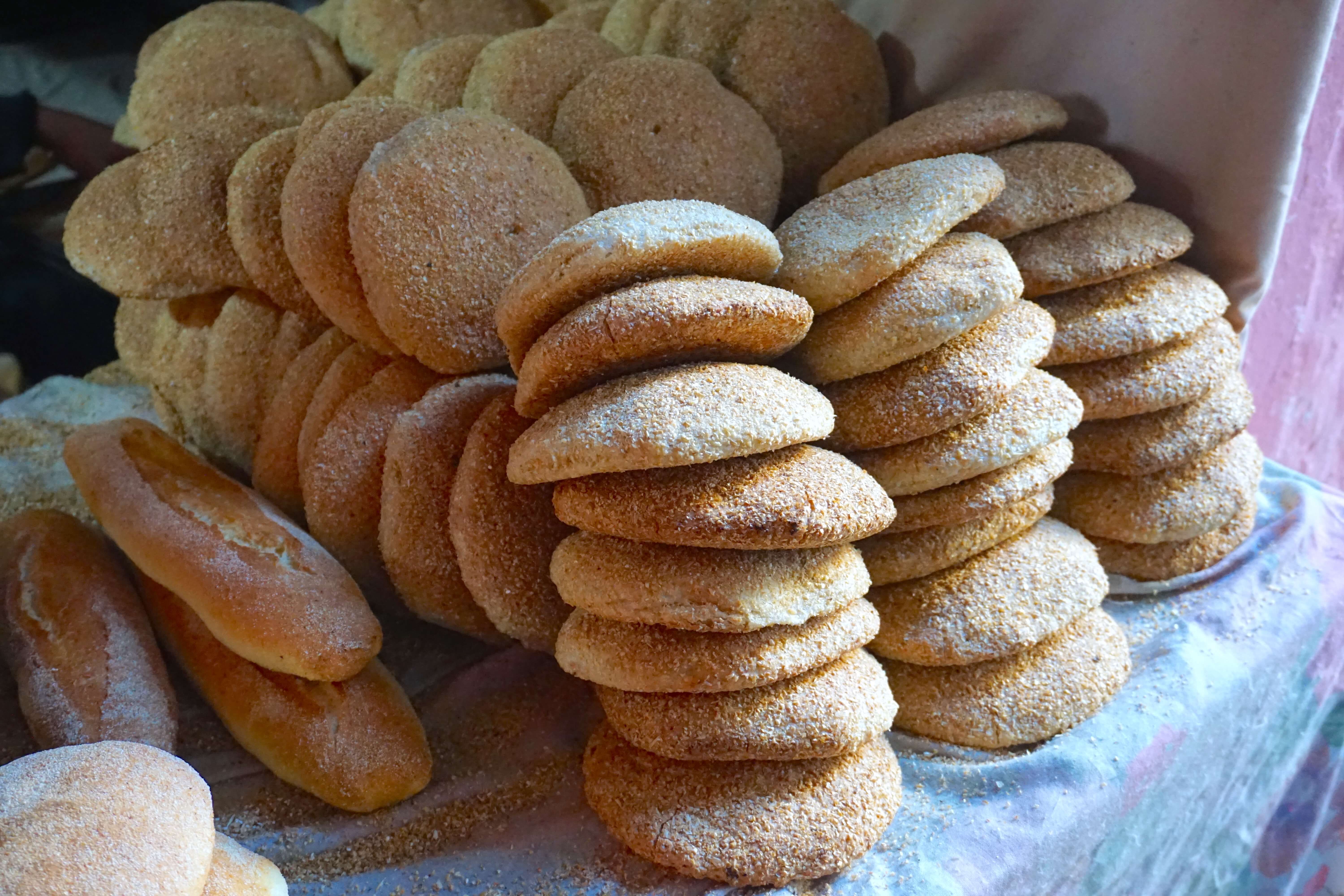 Pastilla, or b’stilla, is a meat pie traditionally filled with Pigeon, although now chicken and almond is the most common version. It originates from Fes but is served all over Morocco. The pie is made from layers of paper thin pastry and dusted with icing sugar to give it a sweet taste. 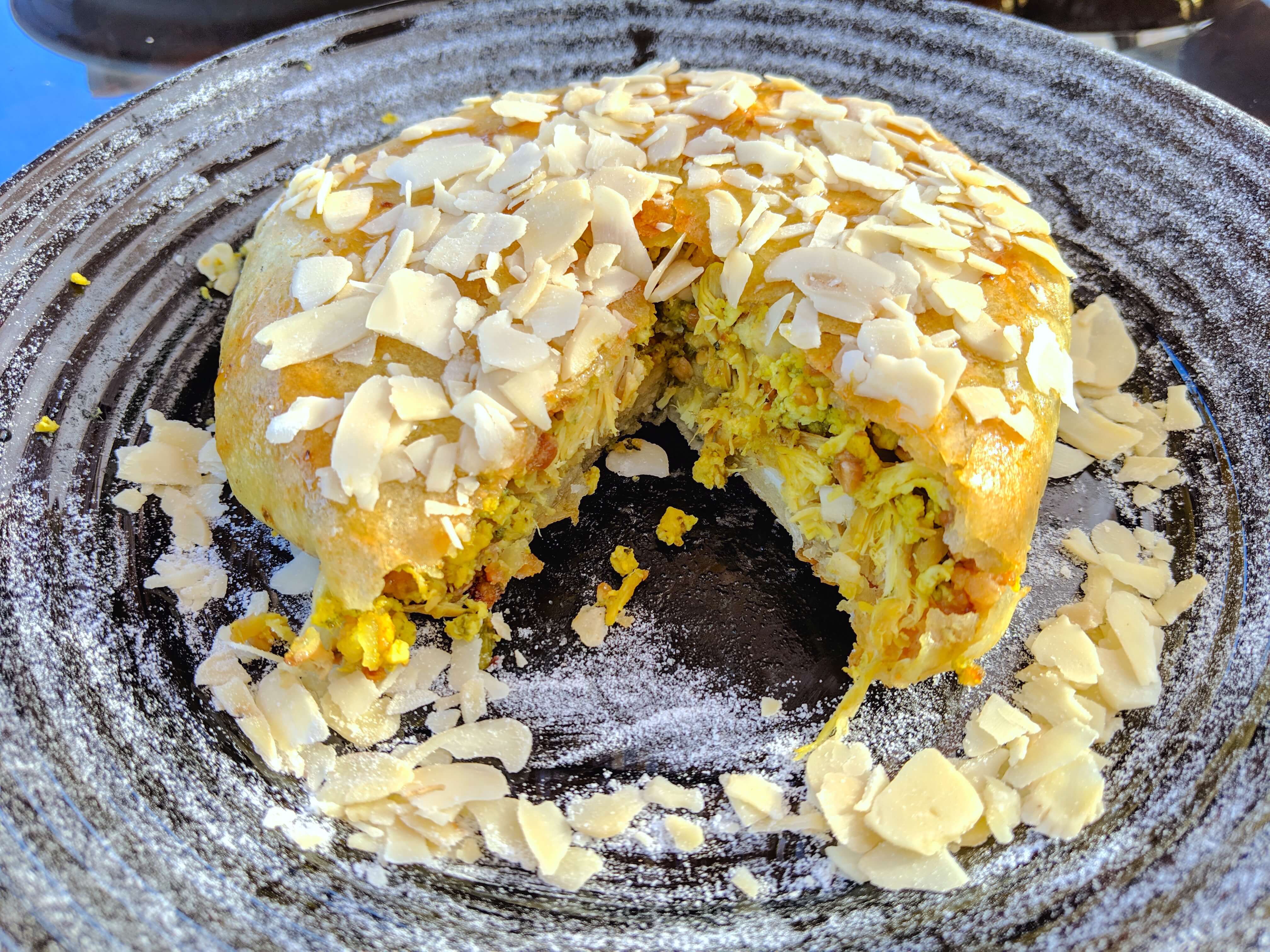 Morocco is the second largest producer of olives and so has a huge variety on offer. Usually served as an appetiser to a meal you can find olives in any medina or souk in Morocco. 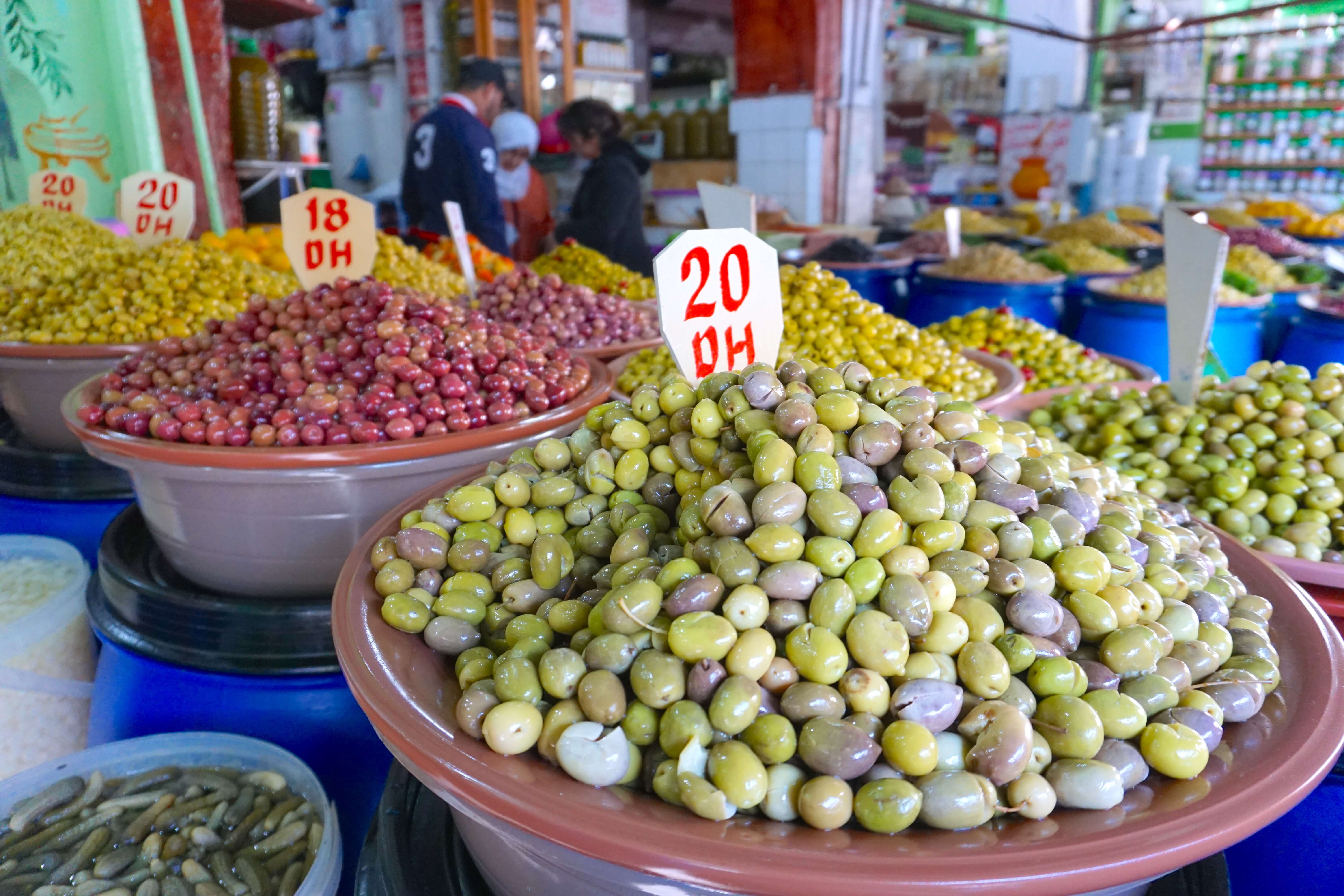 Harira is a traditional Moroccan soup that is mostly served during Ramadan. The recipes tend to vary but the dish is usually rich in tomatoes, chickpeas, lentils, spices and is finished off with a squeeze of lemon. 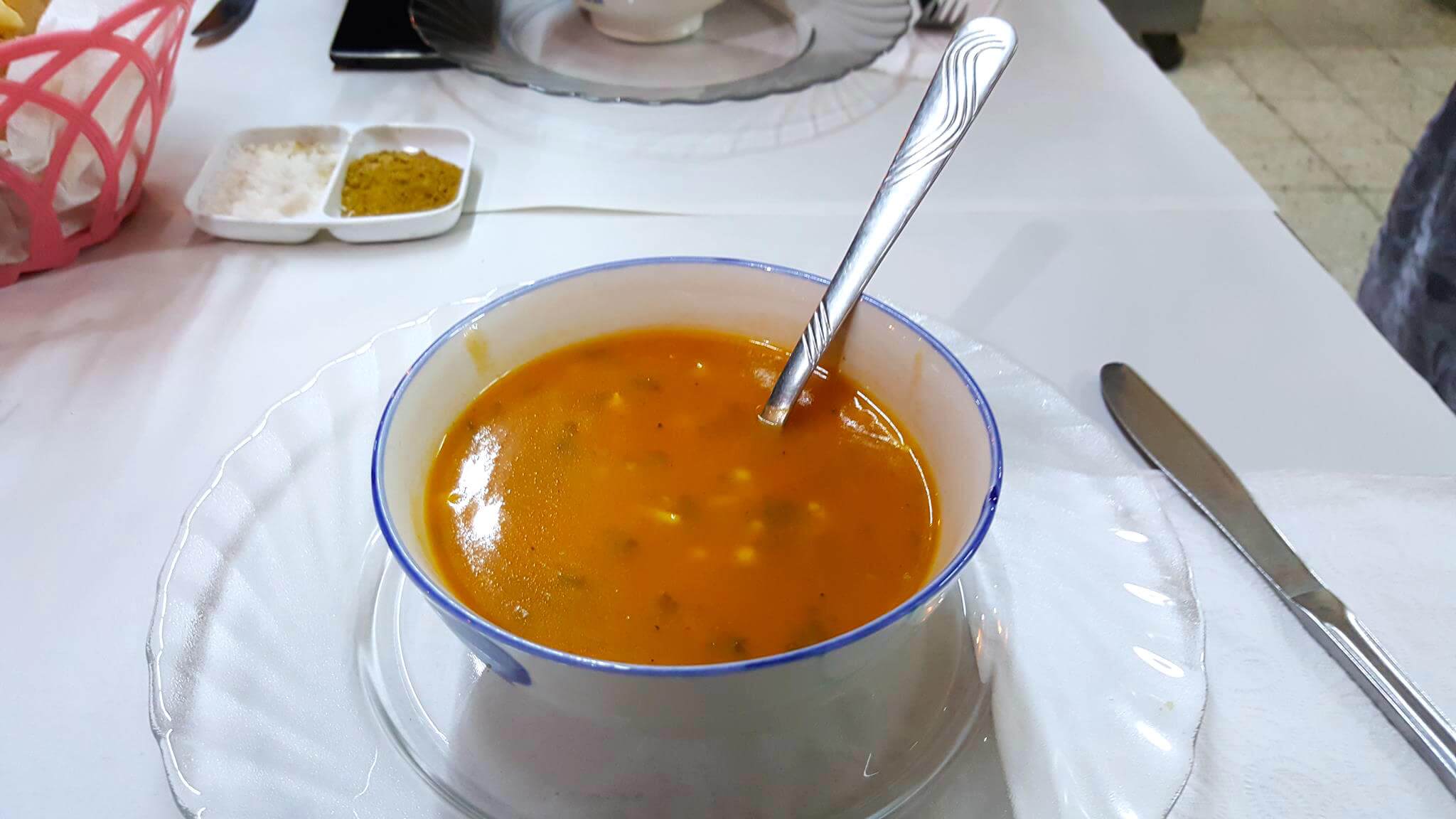 As Morocco is the world’s largest exporter of sardines it’s no surprise that these little fish are popular amongst locals and can be found all over the country. They are usually deep fried to make a tasty snack or side dish. 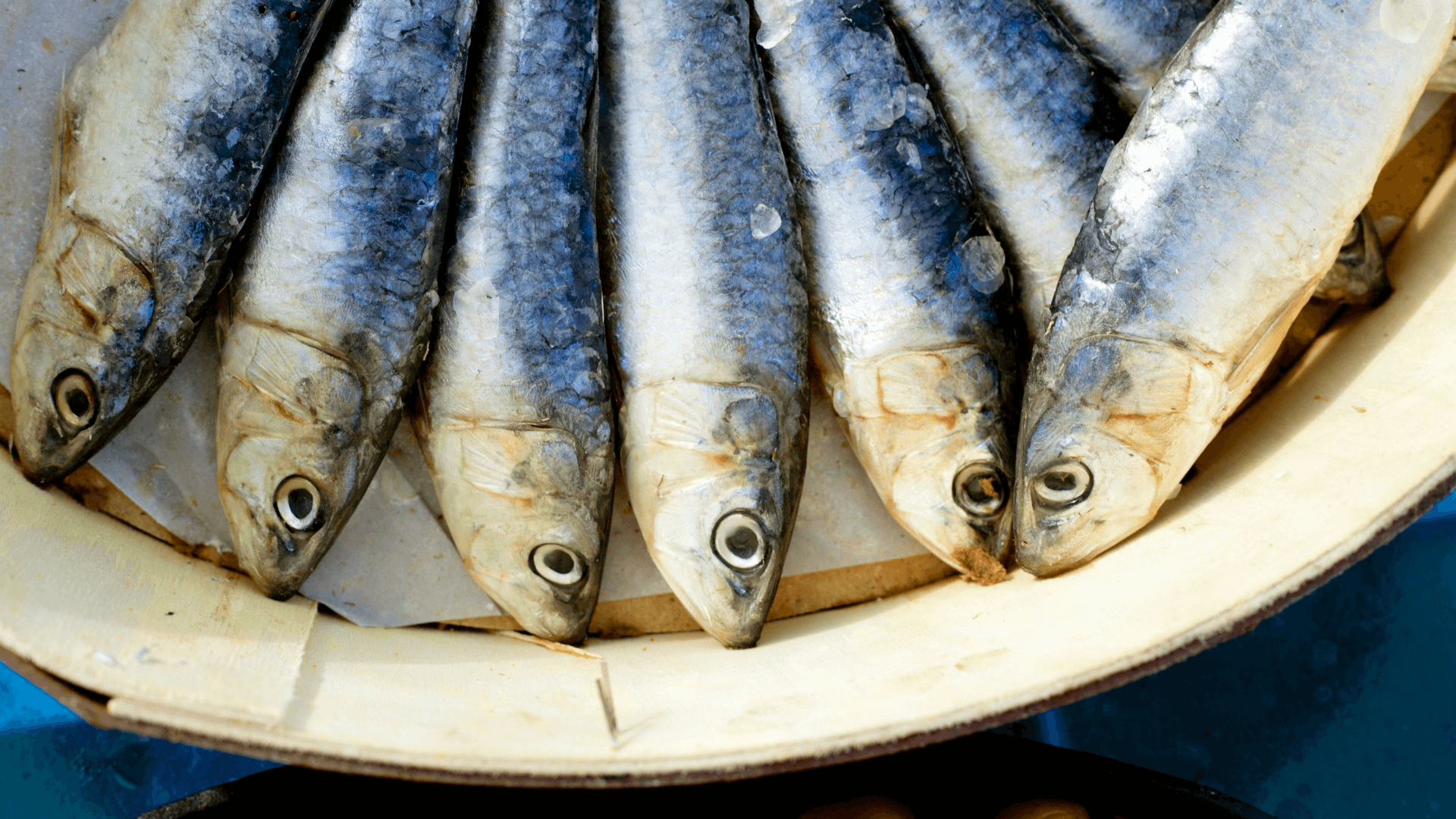 Kofta, or kefta, is a dish made by grinding meat, usually beef or lamb, before mixing it with spices. The meat is then grilled on a skewer, although is often taken off the skewers before serving. You will quite often find them served with a fried egg on top. 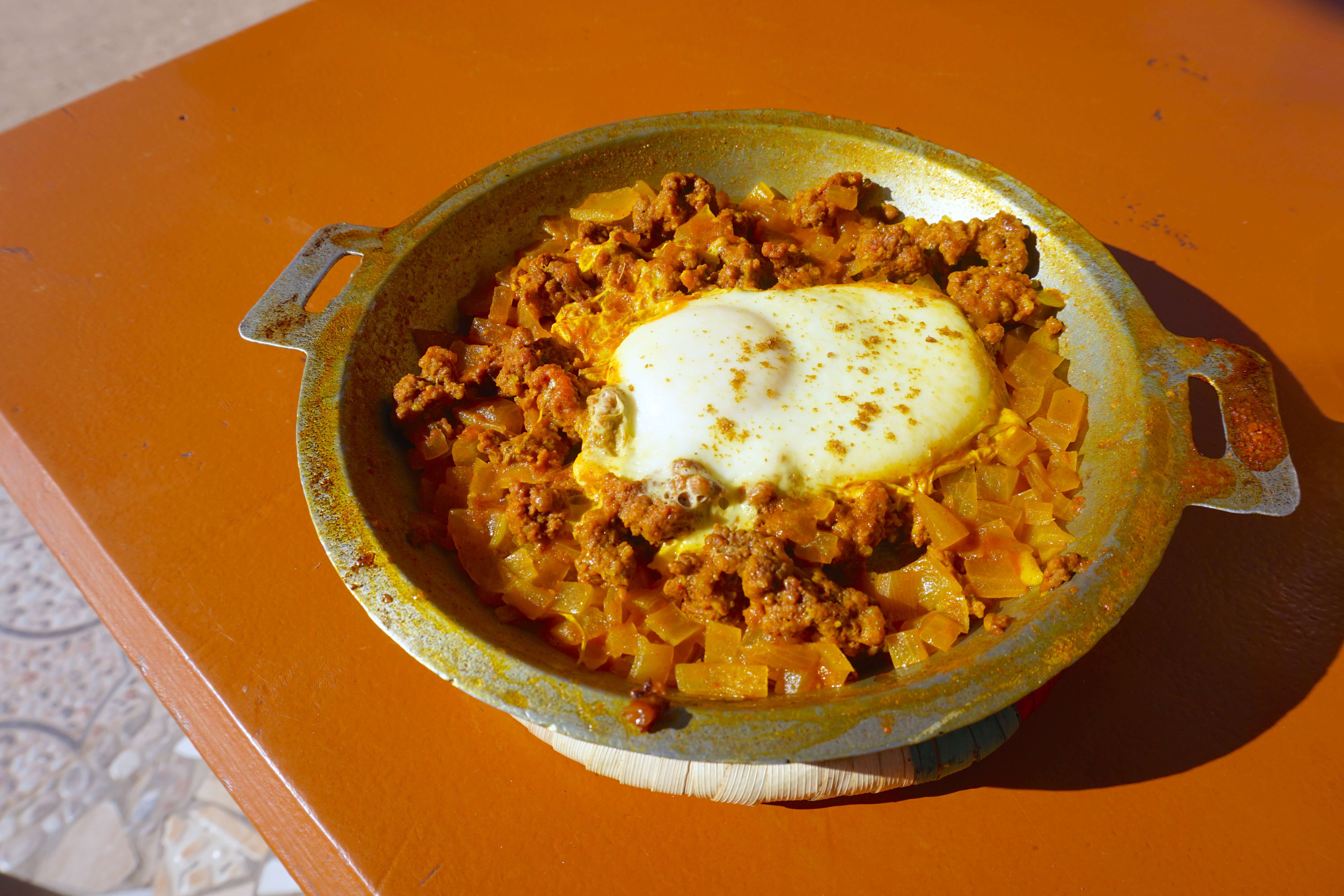 Aubergines (or eggplants) are sliced up into thin slices, dipped into a sweet paprika batter and then deep fried to make this tasty snack. 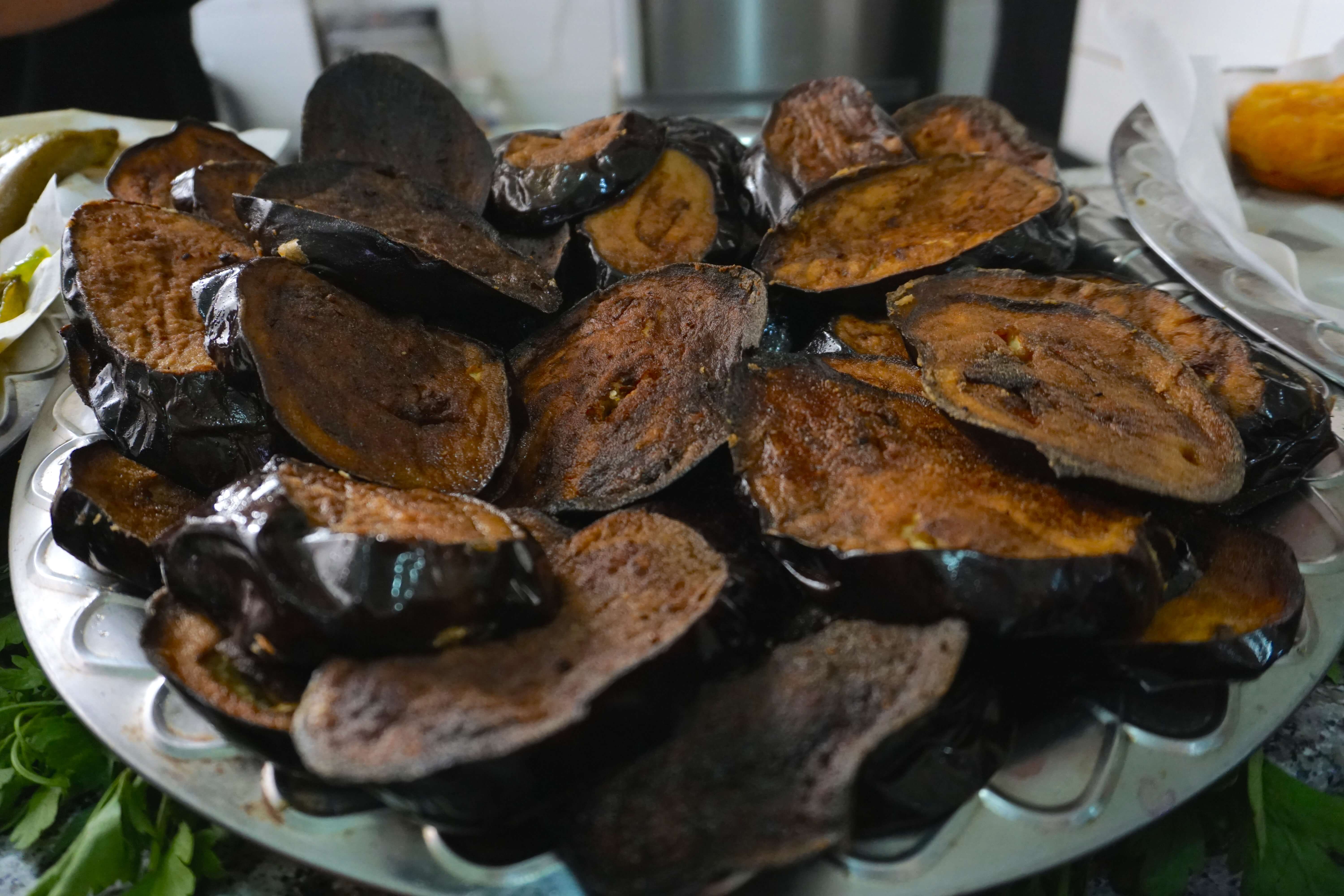 Bissara is a Moroccan soup made from dried fava-beans that is more commonly made in the colder months. It is typically topped with a drizzle of fresh olive oil and a sprinkle of cumin. 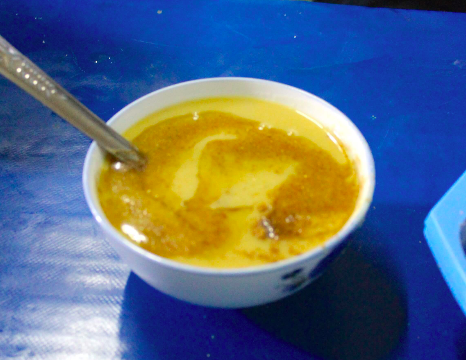 Moroccan salads play a big role in Moroccan cuisine as side dishes. Unlike Western salads, the vegetables are cooked. The most common is Zaalouk which is cooked aubergine, tomatoes, garlic, olive oil and spices. 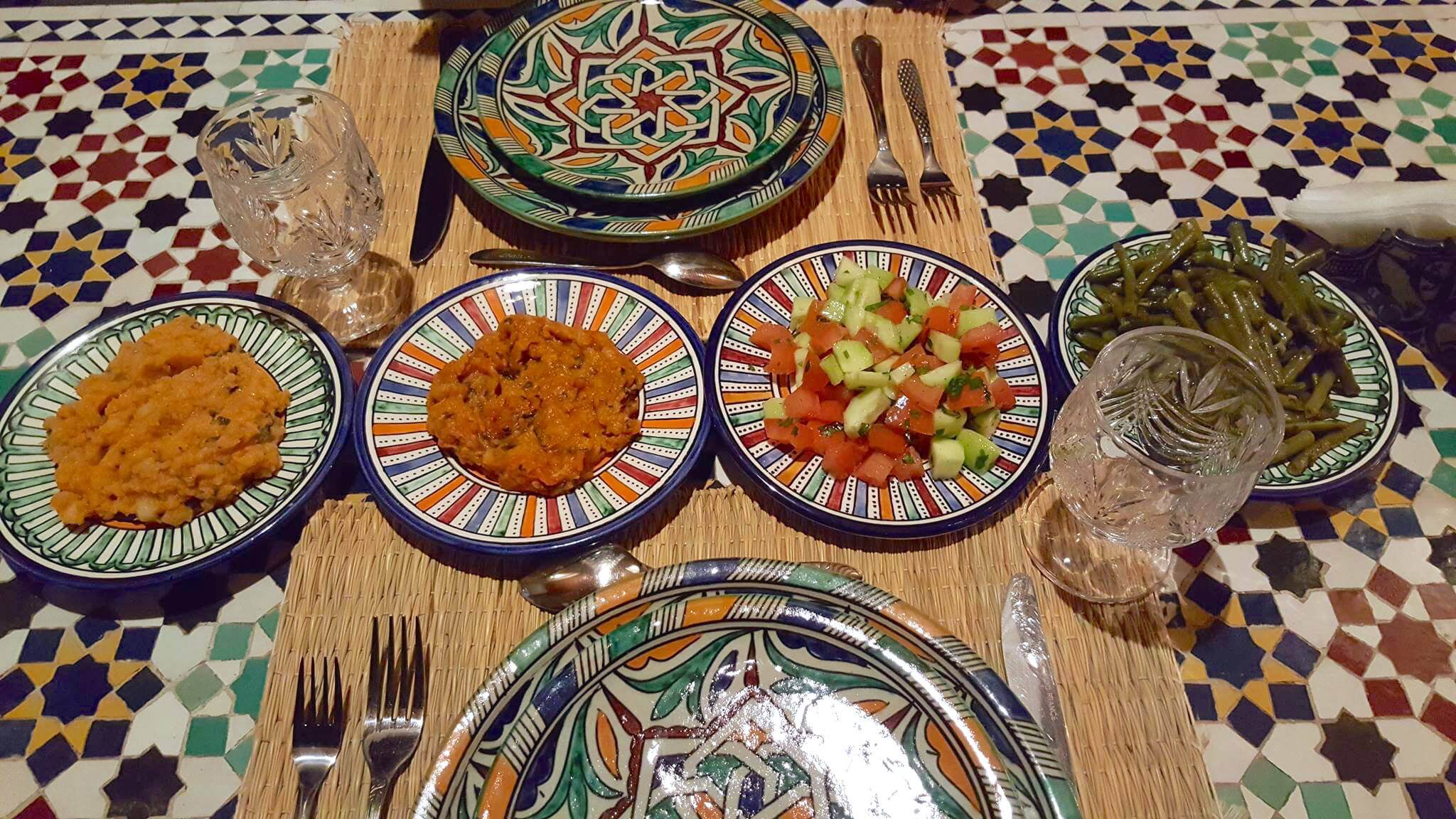 Vendors selling snail soup can be found all across Morocco. Unlike traditional French snails which are cooked heavily in garlic, Moroccan snails are cooked with spices. Snail soup is eaten with a toothpick to get the snails out of the shell before slurping down the broth. 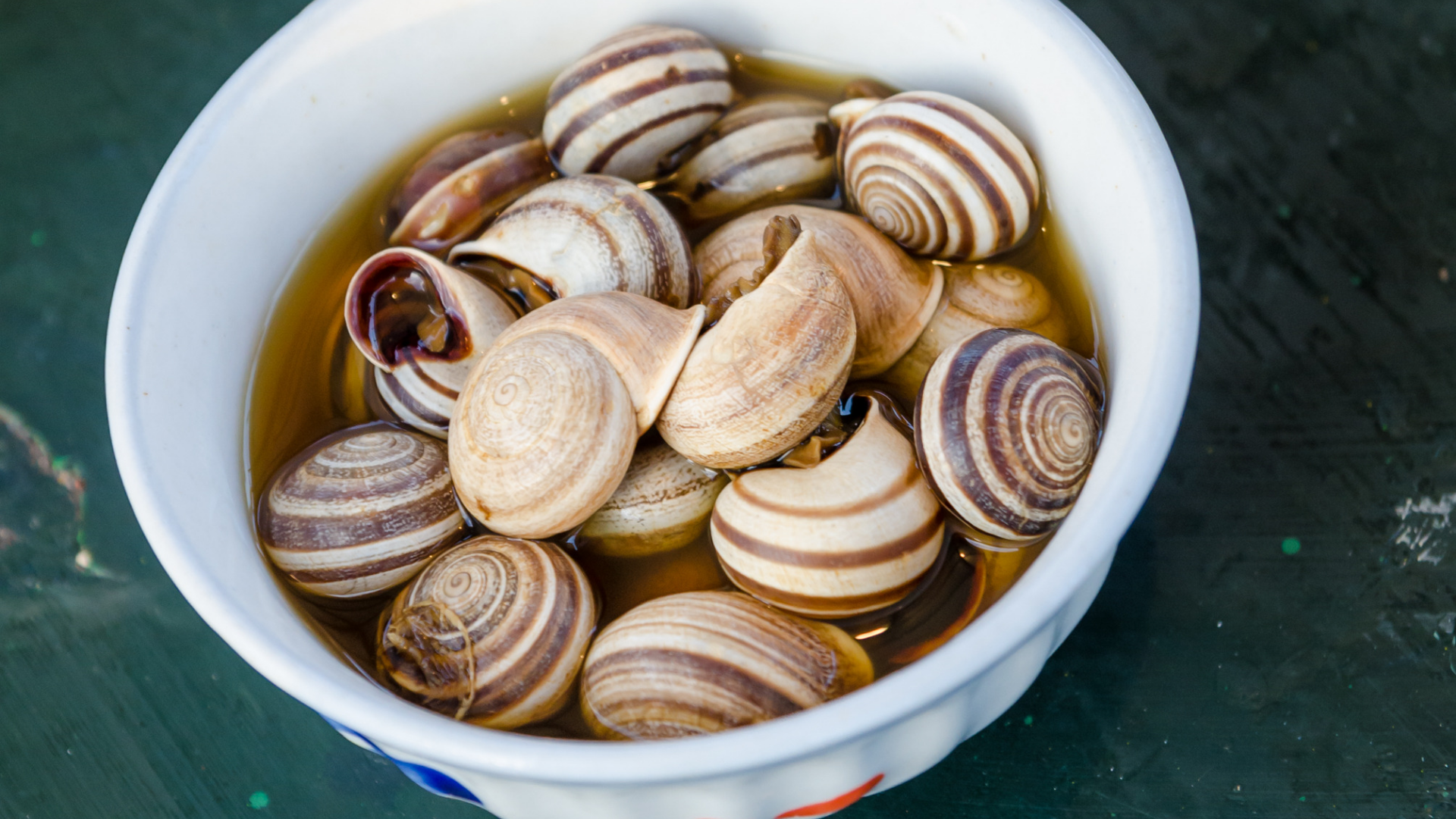 Riding a camel is something on many tourists Moroccan bucket list but for the locals camels are also a source of food. They can be cooked in a variety of ways with stuffed camel spleen being a popular choice amongst locals. Camel burgers are also starting to become a trendy option on menus for tourists. 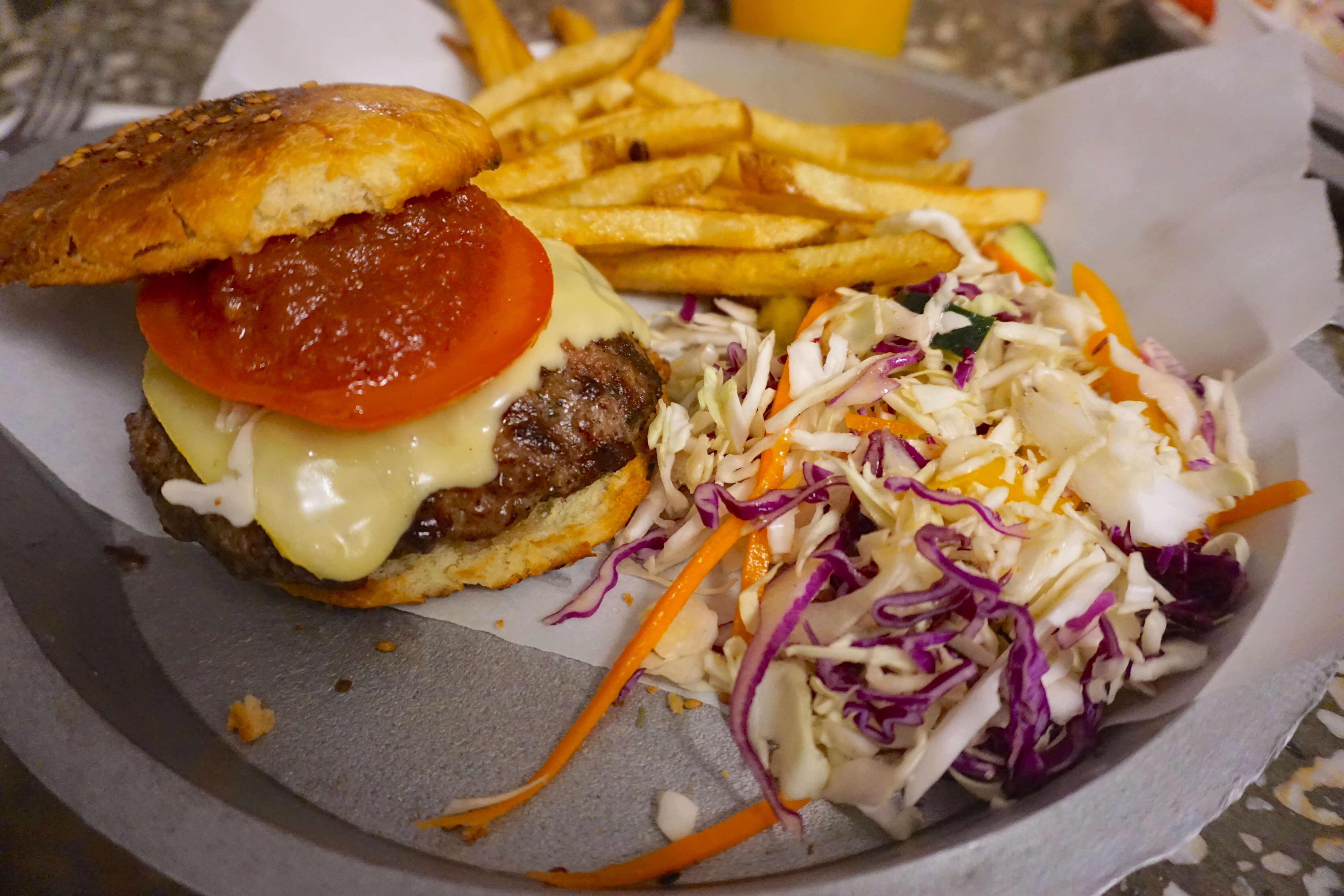 These layered Moroccan pancakes are shaped by folding dough into squares. They are popular not only in Morocco but also Tunisia and Algeria. Although traditionally served at breakfast with jam or honey, savoury versions can also be found. 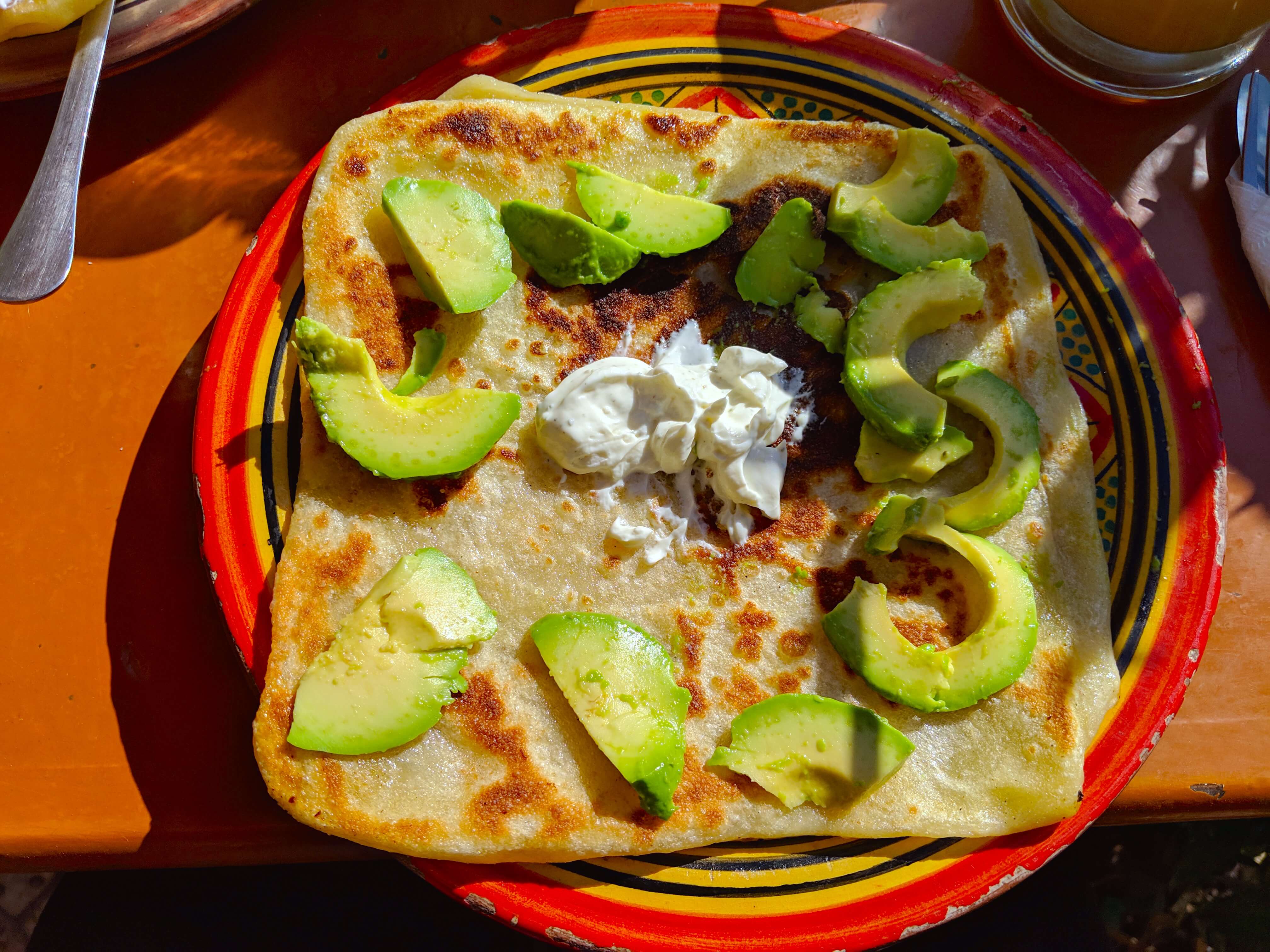 Maakouda are crispy and spicy potato fritters shaped into discs that are traditionally deep fried. They can be eaten alone as a snack or appetiser although it is common for Moroccan’s to make them into a sandwich. 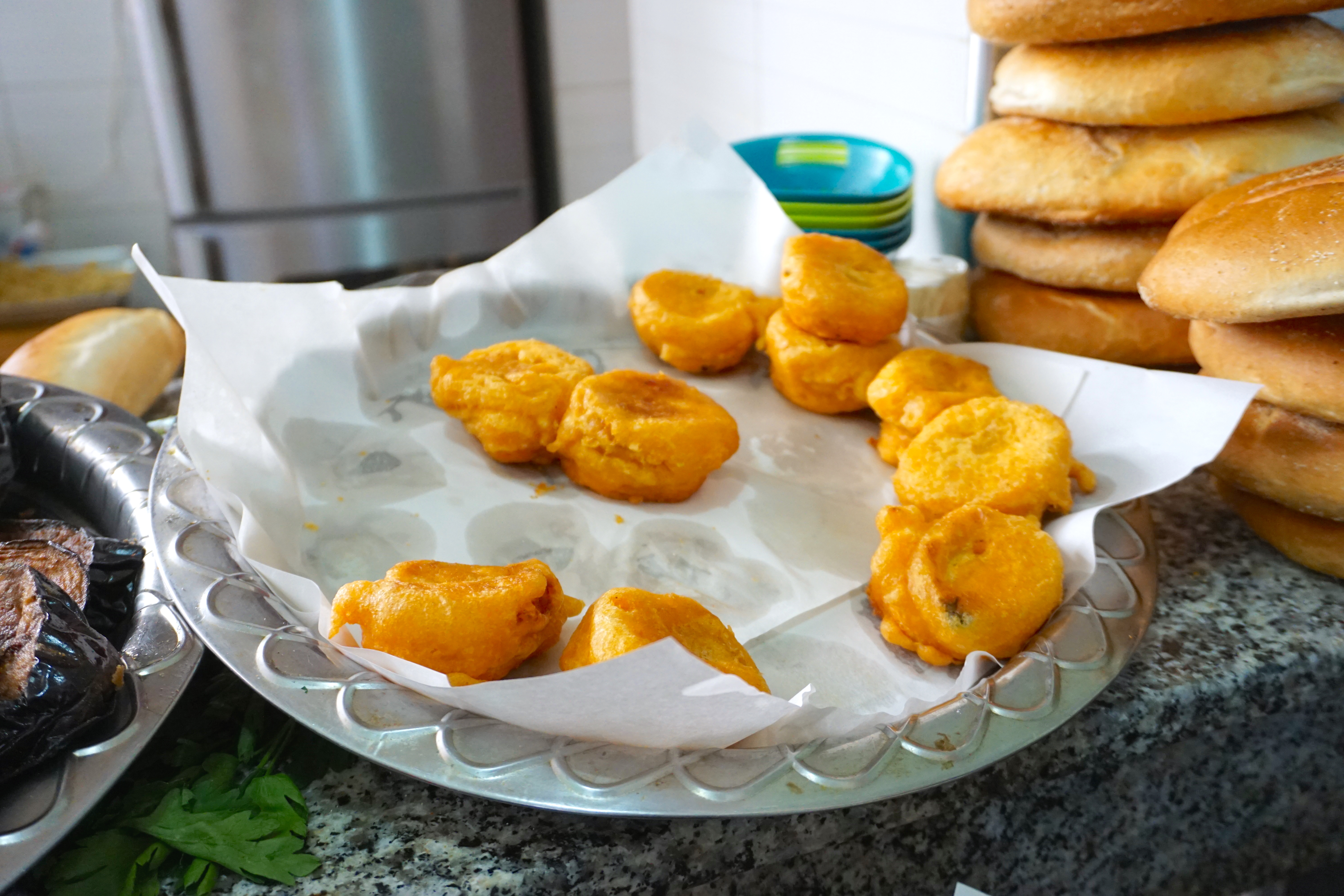 Beghrir, or baghrir, are light and spongy pancakes made from a crepe like batter. They are usually served at breakfast and eaten with jam or honey. The yeast in the batter causes bubbles to rise to the surface creating it’s distinctive texture. In fact in French they are referred to as le crepe aux mille trous (the crepe with a thousand holes). 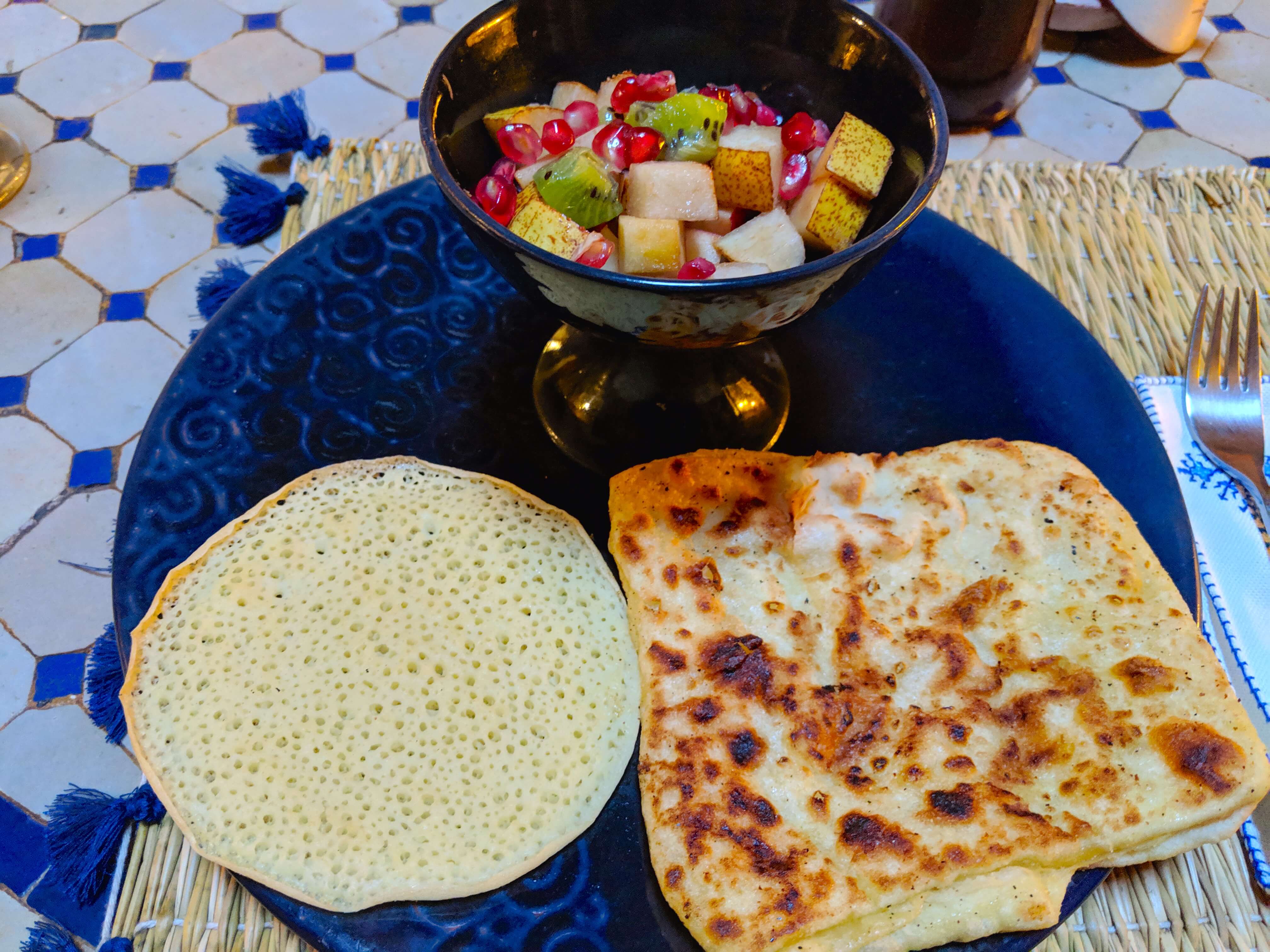 Not one for the faint hearted but popular amongst locals. Sheep heads are steamed for five hours ready in time for lunch. As none of the sheep goes to waste you’ll also find sheep brains on sale next to the sheep heads. 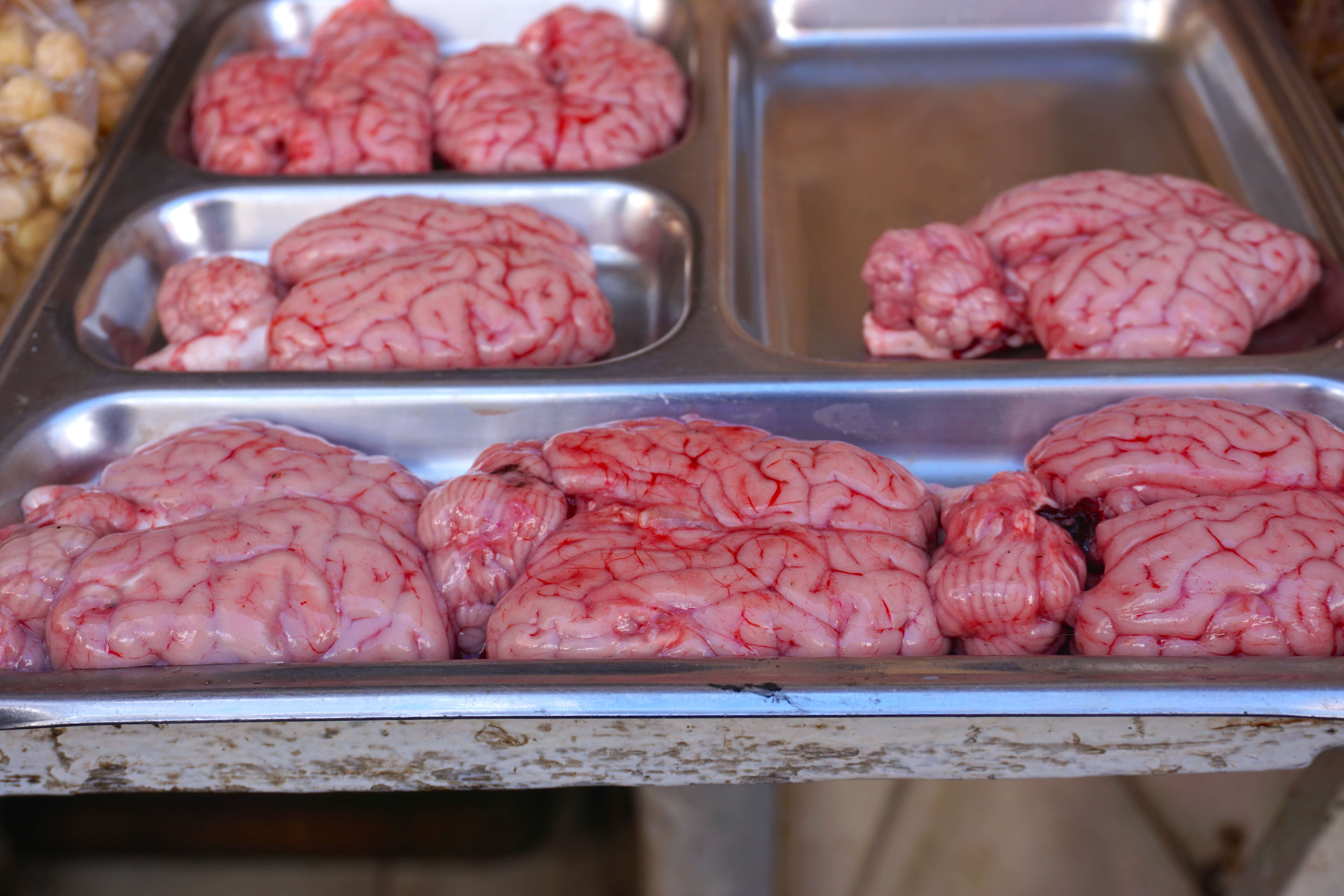 Briouats or briwats are stuffed puff pastries that can be sweet or savoury. Savoury briouats can be filled with chicken, lamb, beef or seafood. They are wrapped in filo pastry and are usually in a triangle shape, although sometimes can be cylinder shape. 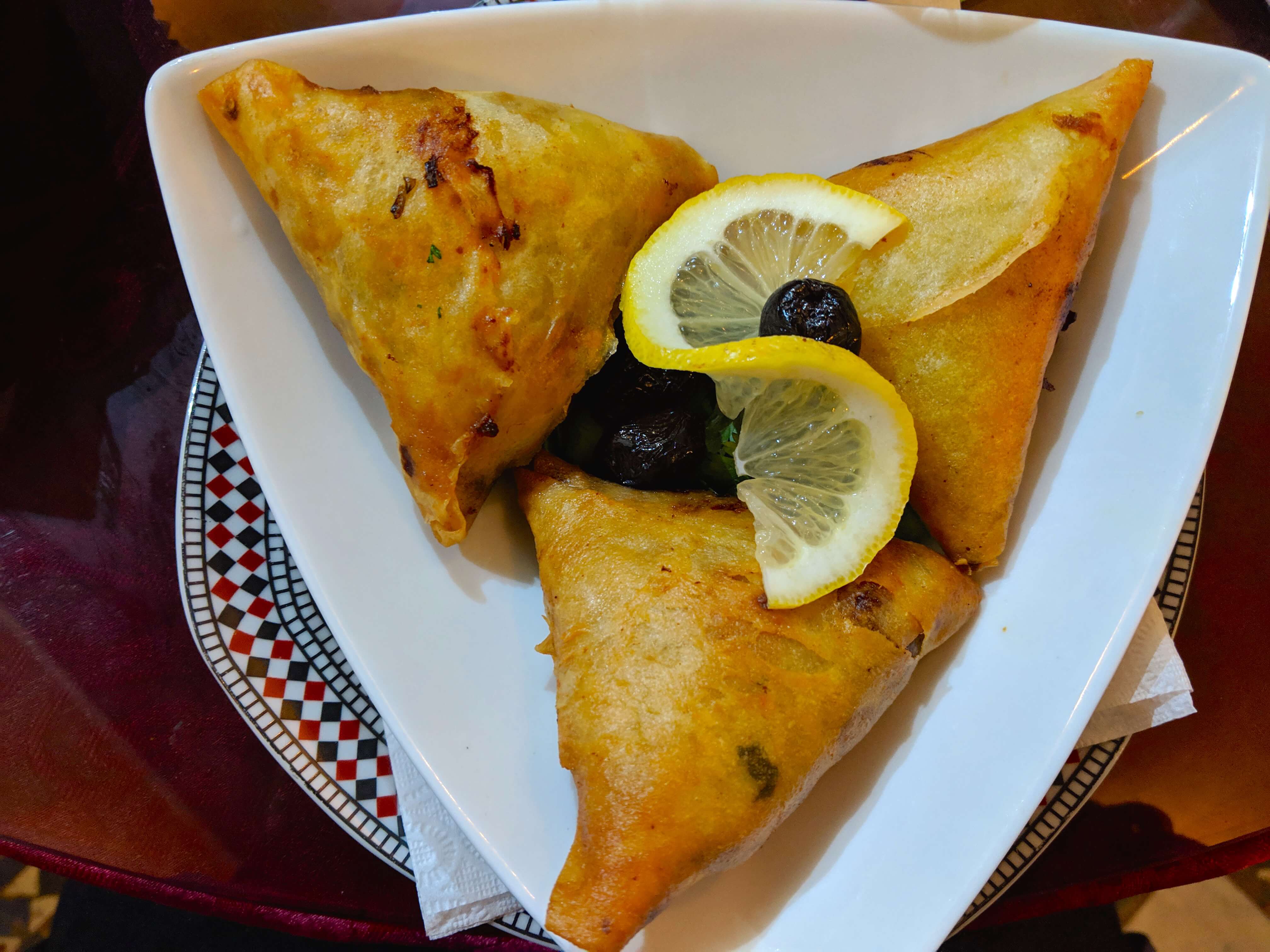 Desserts in Morocco are usually seasonal fresh fruit and the most common dish is orange slices sprinkled with cinnamon, sugar and orange flower water. It’s sweet, refreshing and the perfect way to end a meal. 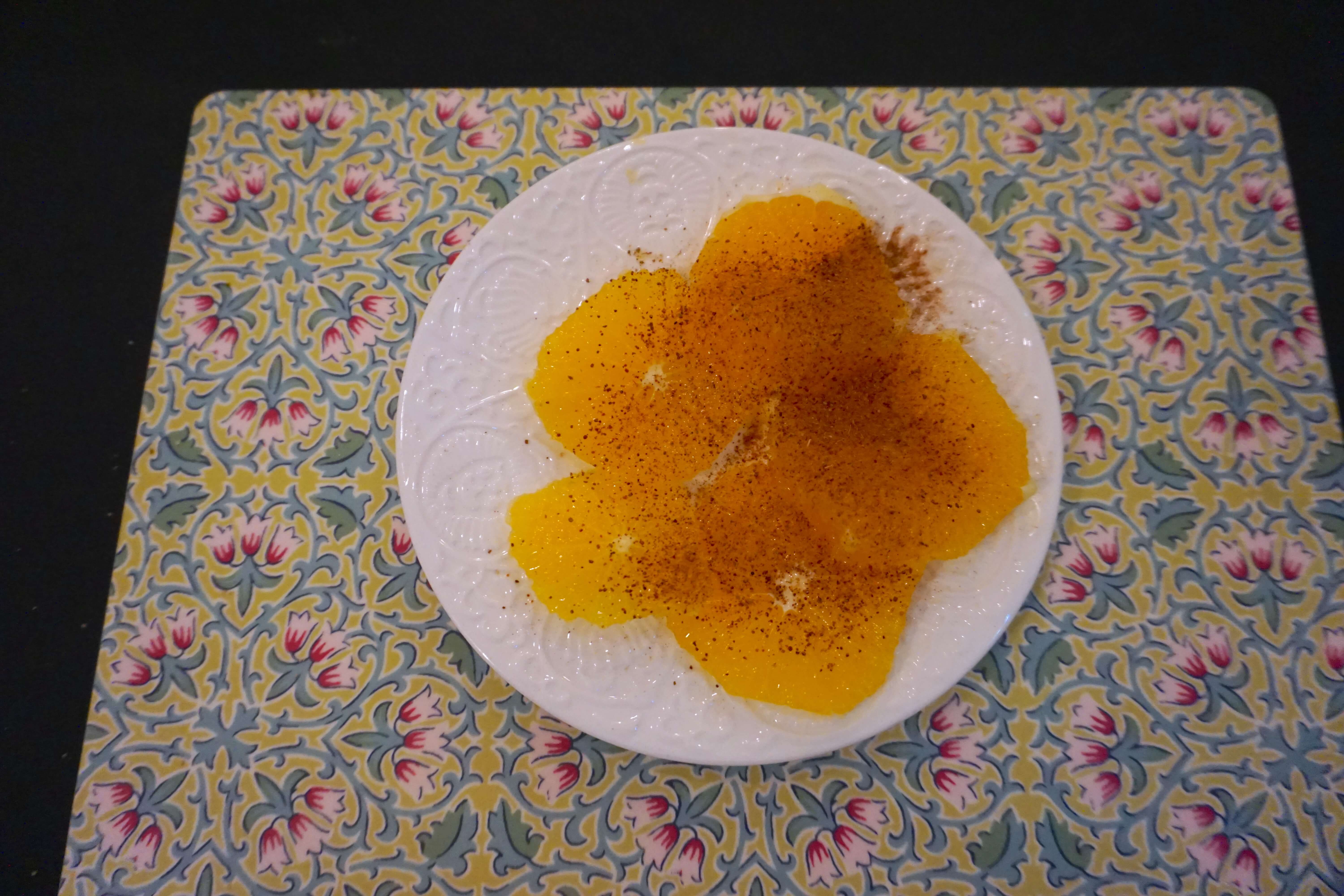 Chebakia are made of strips of dough that have been folded to resemble a rose. They are then deep fried and coated with a honey syrup and sesame seeds. These fragrant cookies are traditionally made during ramadan to break the fast. 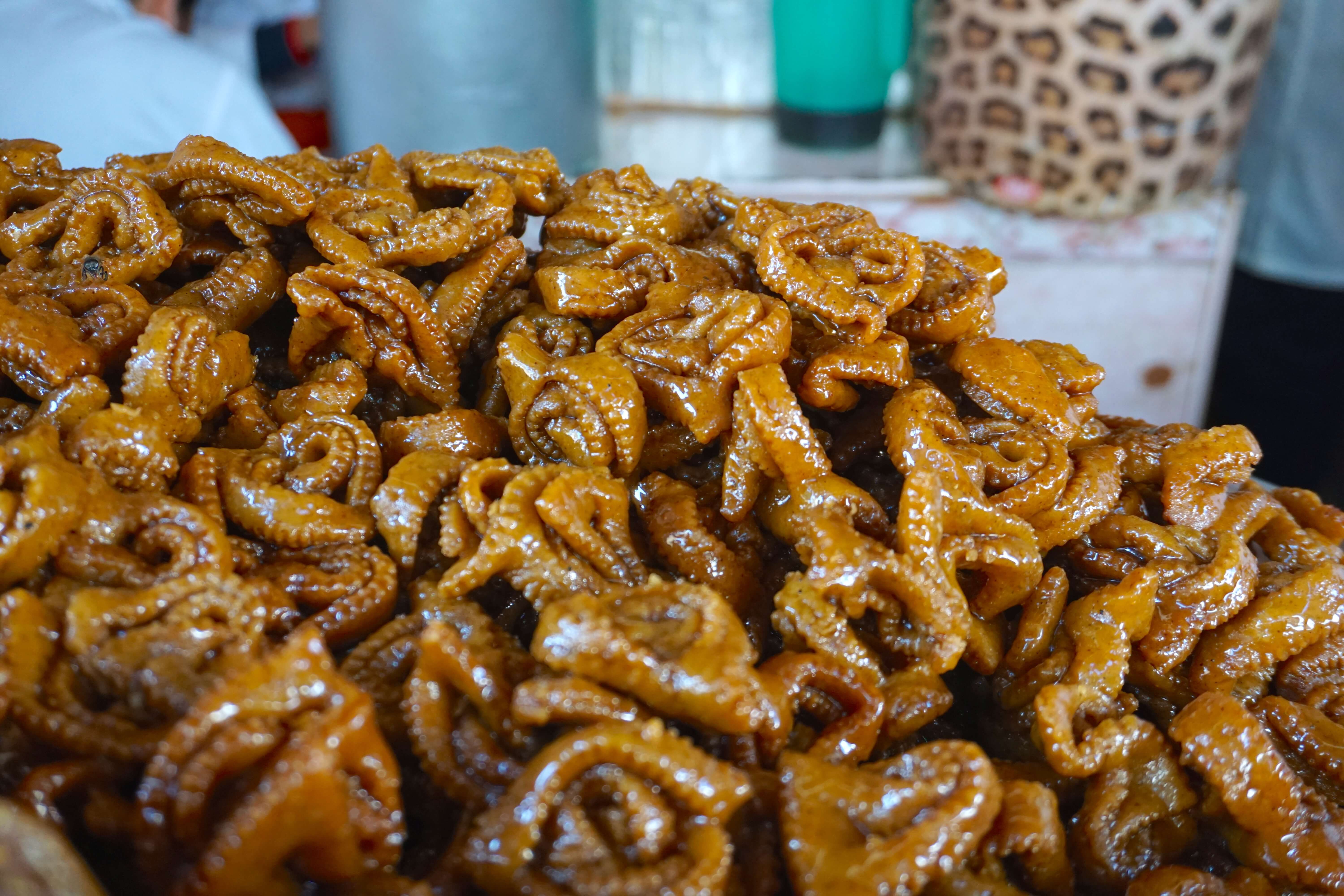 A simple yet refreshing dish in Morocco is a carrot and orange salad. Made with fresh orange, grated carrots and cinnamon this dish can be served as a starter or a dessert. 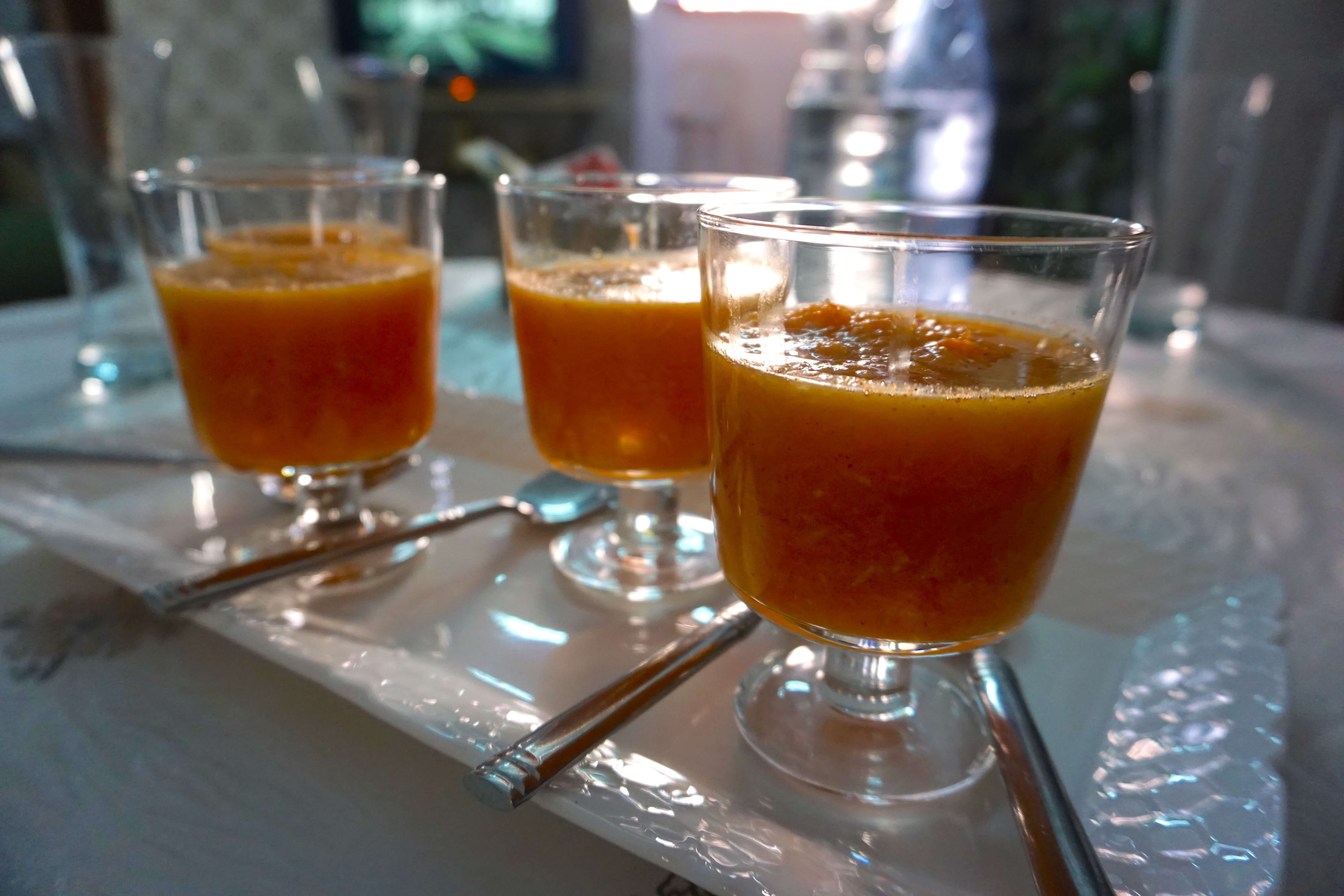 Dates can be found all over Morocco and the most common date consumed is the Medjoul date which is soft, sweet and has a velvety flavour. They can be eaten on their own, added to dishes and quite often stuffed with almonds. 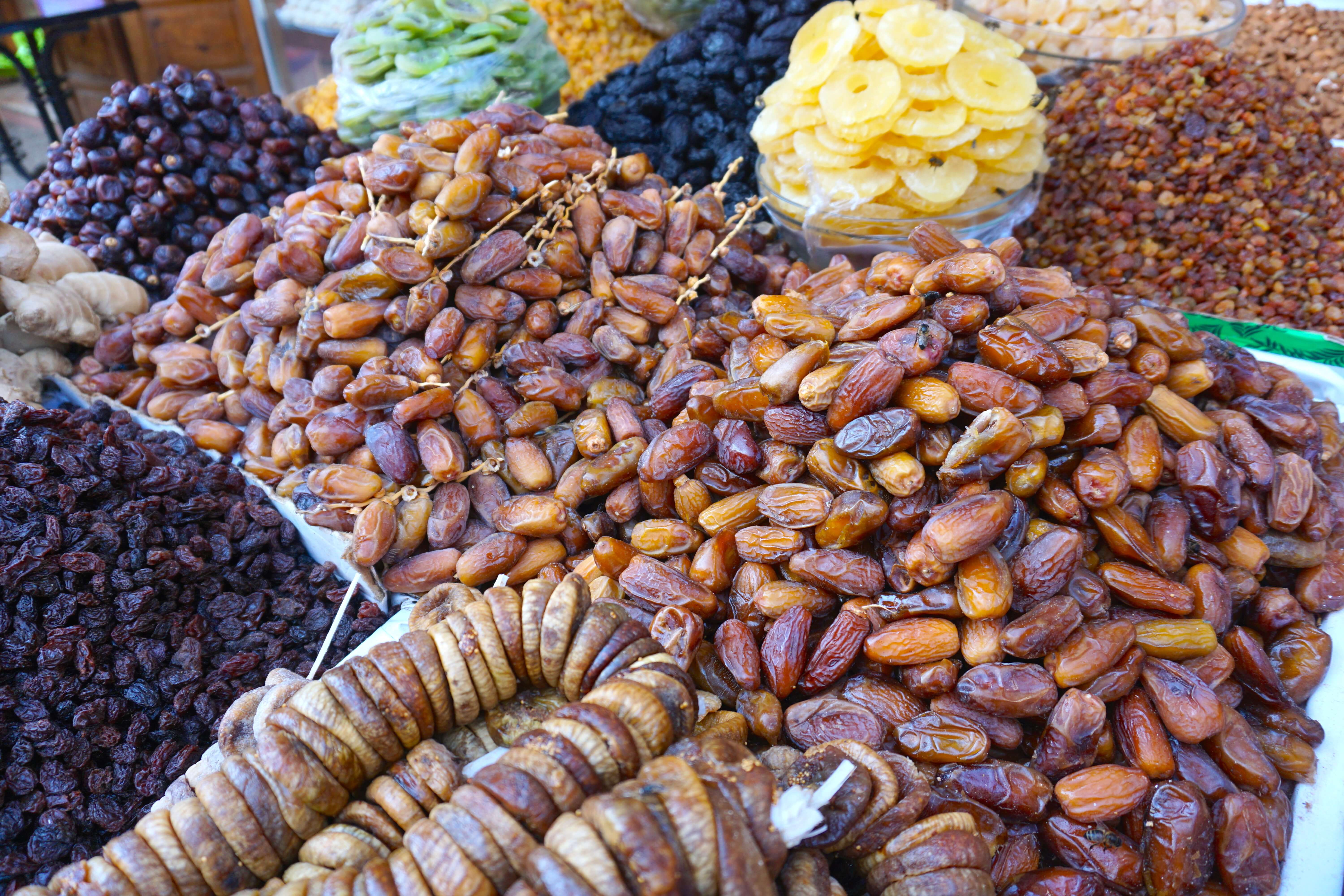 Walking around the souks and medinas there will be plenty of cookies and biscuit treats to tempt you. Chewy and delicious, crispy and flavourful, you’re bound to find something that excites your tastebuds. 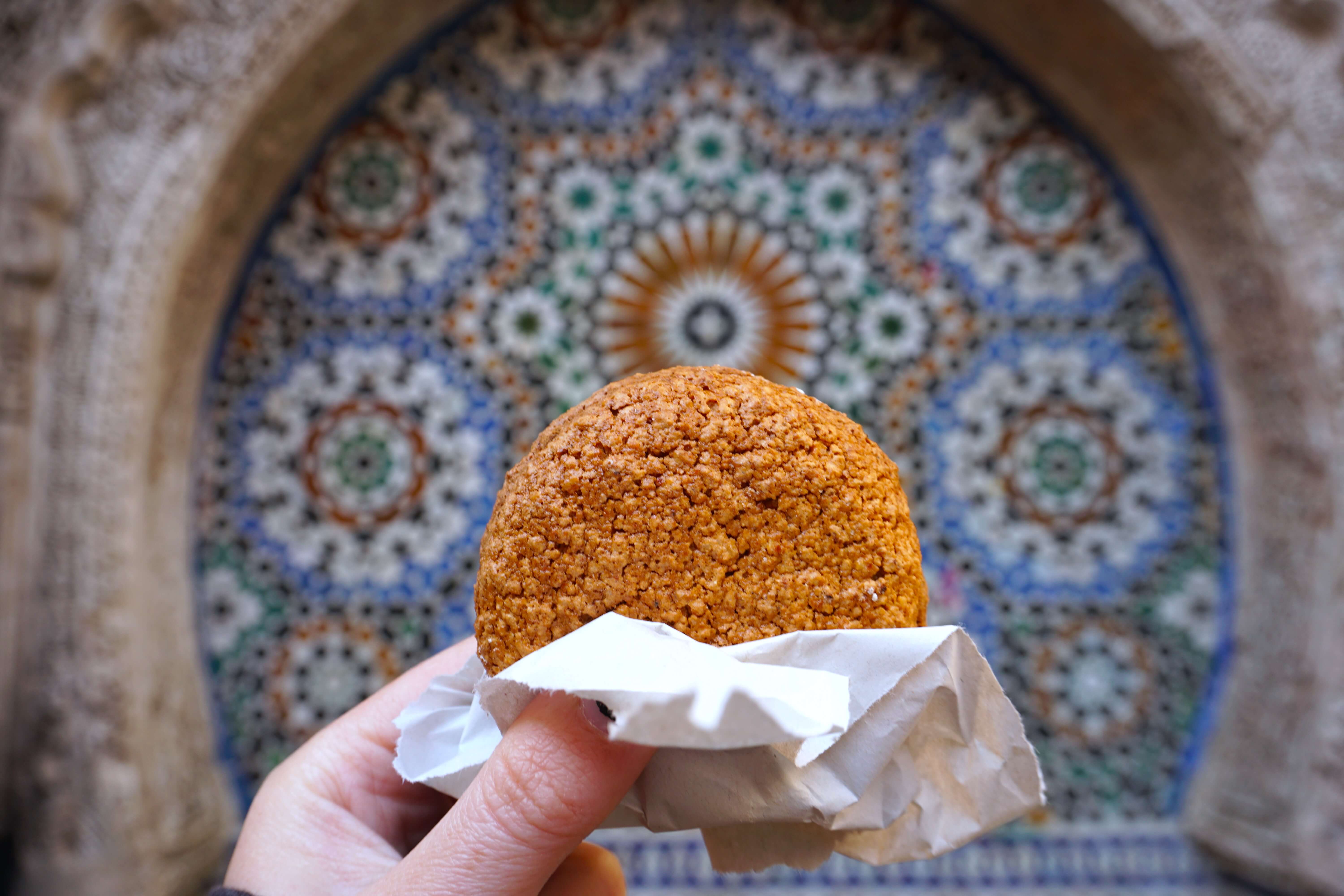 Rziza is a Moroccan speciality made from puff pastry dough that’s been finely cut and wrapped around something before pan fried to give it its unique shape. It’s then drizzled with honey to make a deliciously sweet treat. 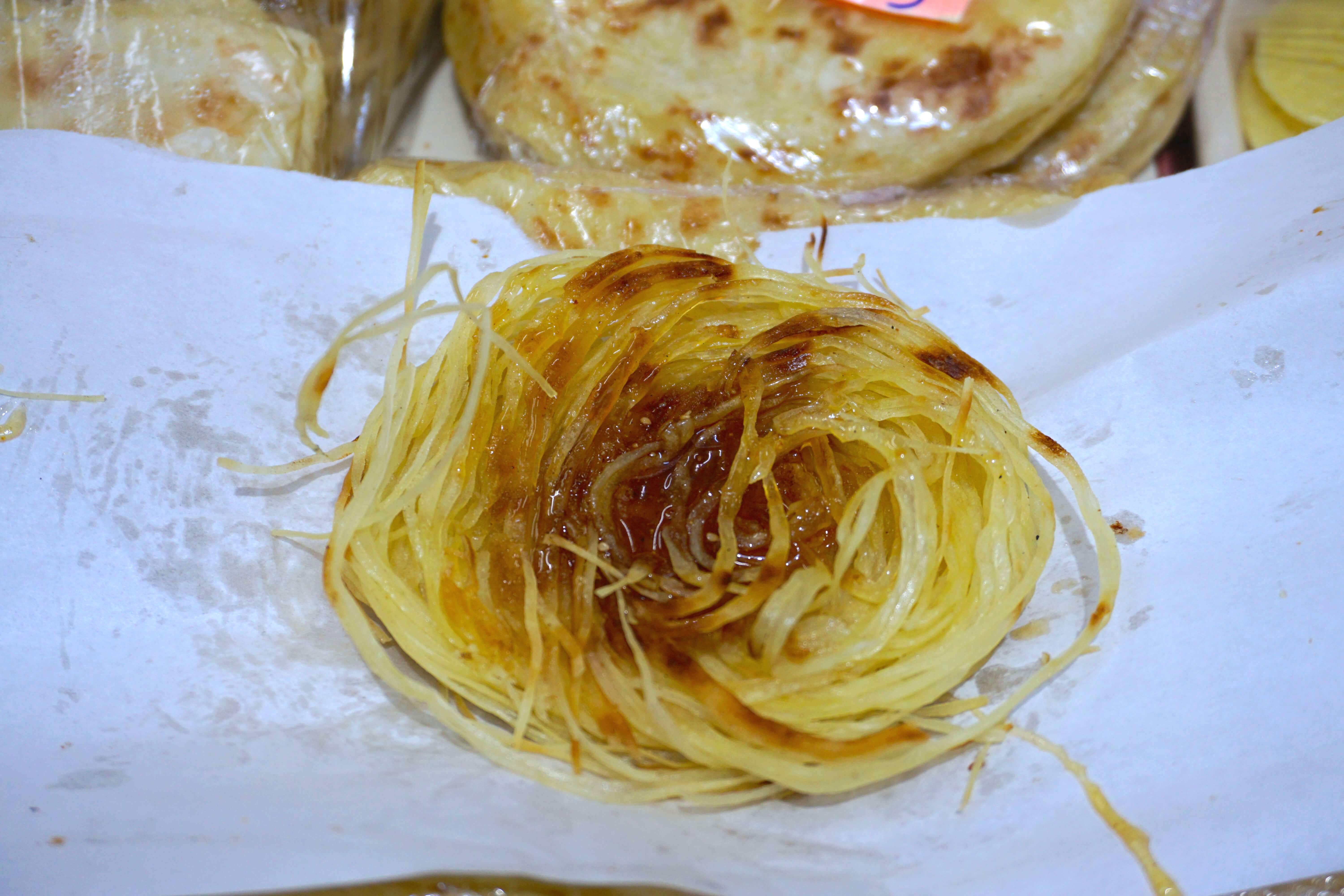 No trip to Morocco would be complete without trying Maghrebi mint tea. The tea is a drink traditionally offered to guests as a sign of hospitality. If offered it is considered impolite to refuse. Be warned though, that Moroccan mint tea is a lot sweeter than traditional mint tea. 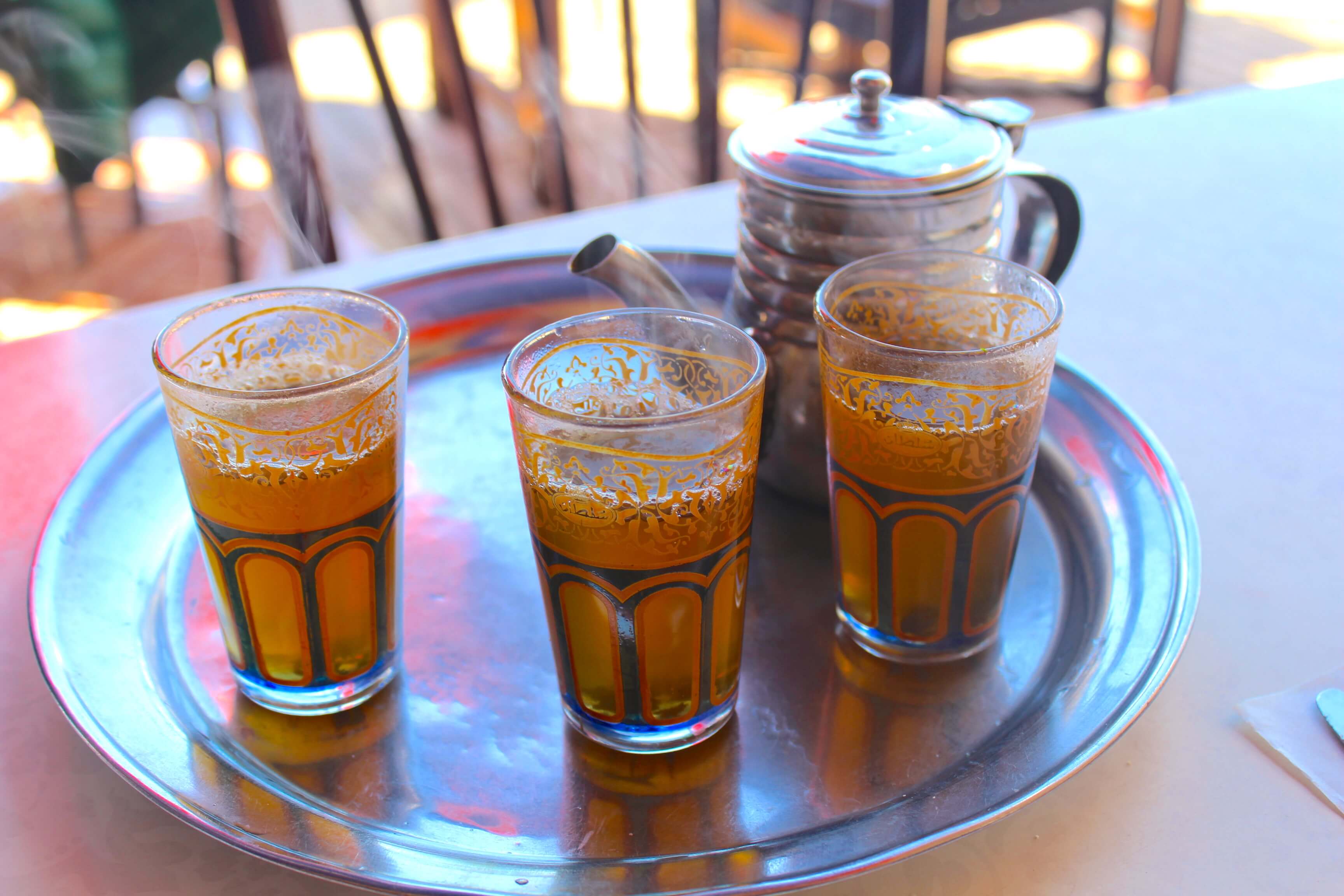 I hope this list of Moroccan food has made you hungry enough to want to visit this amazing country. What’s your favourite Moroccan food? Let me know in the comments

Planning your Morocco trip? Check out these posts 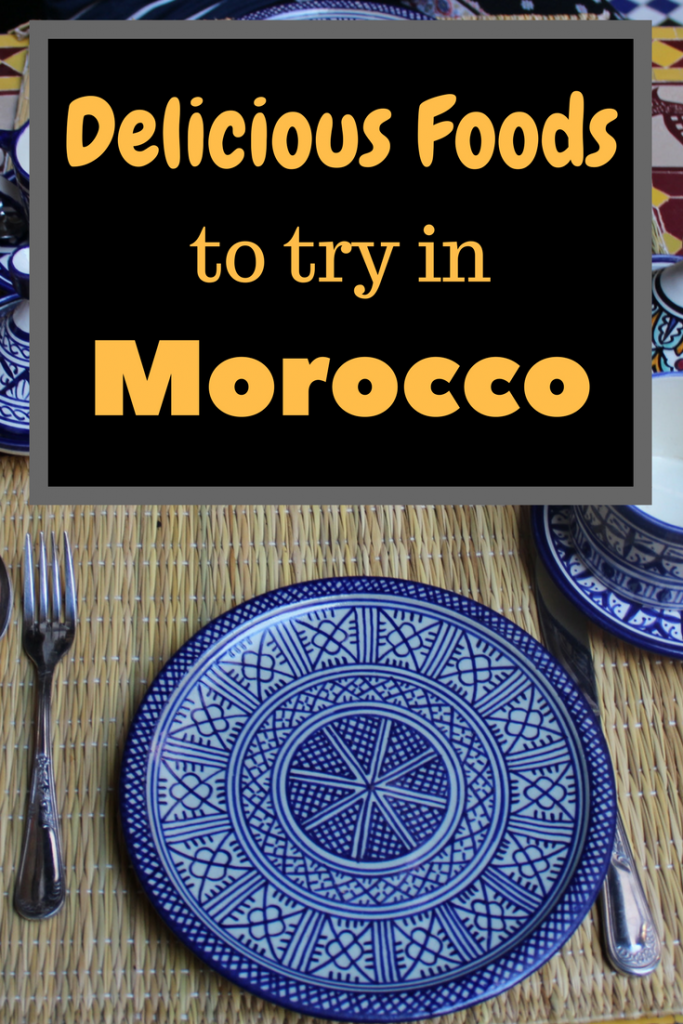 Riad Marhaba: The Most Welcoming Riad in Rabat
Riad Star Review: A Gorgeous Luxury Riad in Marrakech
Eating My Way Through Rabat on a Moroccan Food Tour
An Authentic Moroccan Stay at Riad Toyour