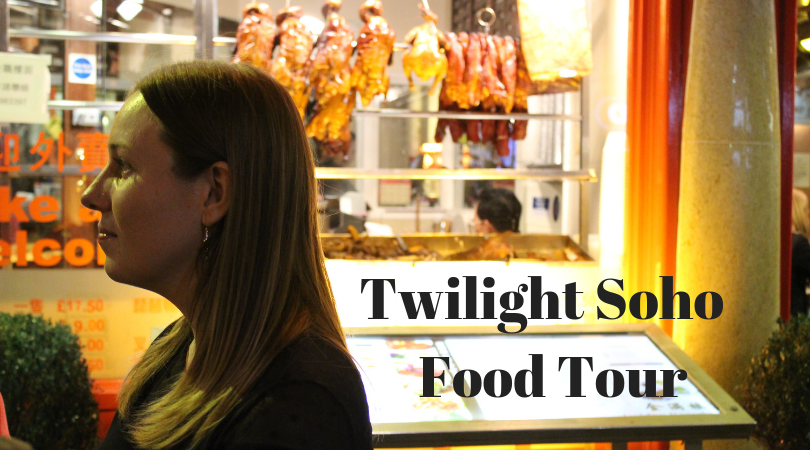 Last week I went on my very first food tour which five years ago would not have been something I’d be excited to do. You see, five years ago I was only just starting to introduce vegetables into my diet. Yes you did read that right! I basically had the diet of a child. A mature child, but still a child. Like a child I wouldn’t eat something without knowing what it was so booking a tour without knowing what I’d be eating simply wouldn’t have happened back in those days. Thankfully, since then I’ve opened my mind to more food and I love experiencing new flavours so this was a real treat for me.

This food tour was a new London tour by Eating Europe called ‘The Twilight Soho Food Tour’ and since the company has an outstanding reputation I knew I was in for a good night. The tour started just outside the Palace Theatre where we met our tour guide Joe. The night started with Joe explaining what we could expect from the tour plus a brief history of the ever changing Soho. 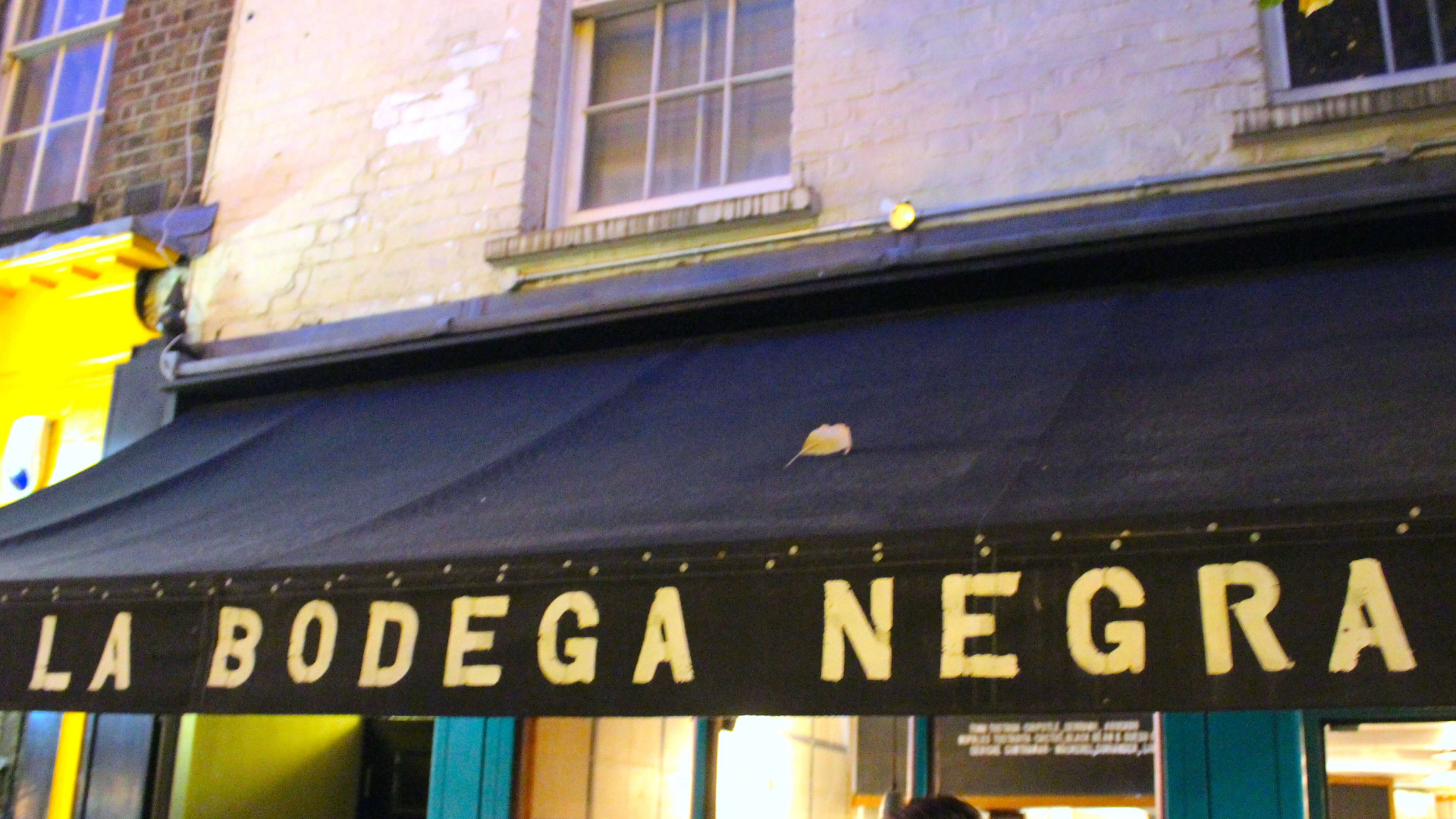 After this it was time to head to our first stop, La Bodega Negra, for some authentic Mexican food. This place is popular for serving traditional Mexican food with a twist, or so we were told by Joe.

Once inside we were offered a mango margarita which I happily took only to be surprised by a spicy taste I’m not used to experiencing when drinking margaritas. I guess Mexicans like everything with a little heat, including their cocktails! 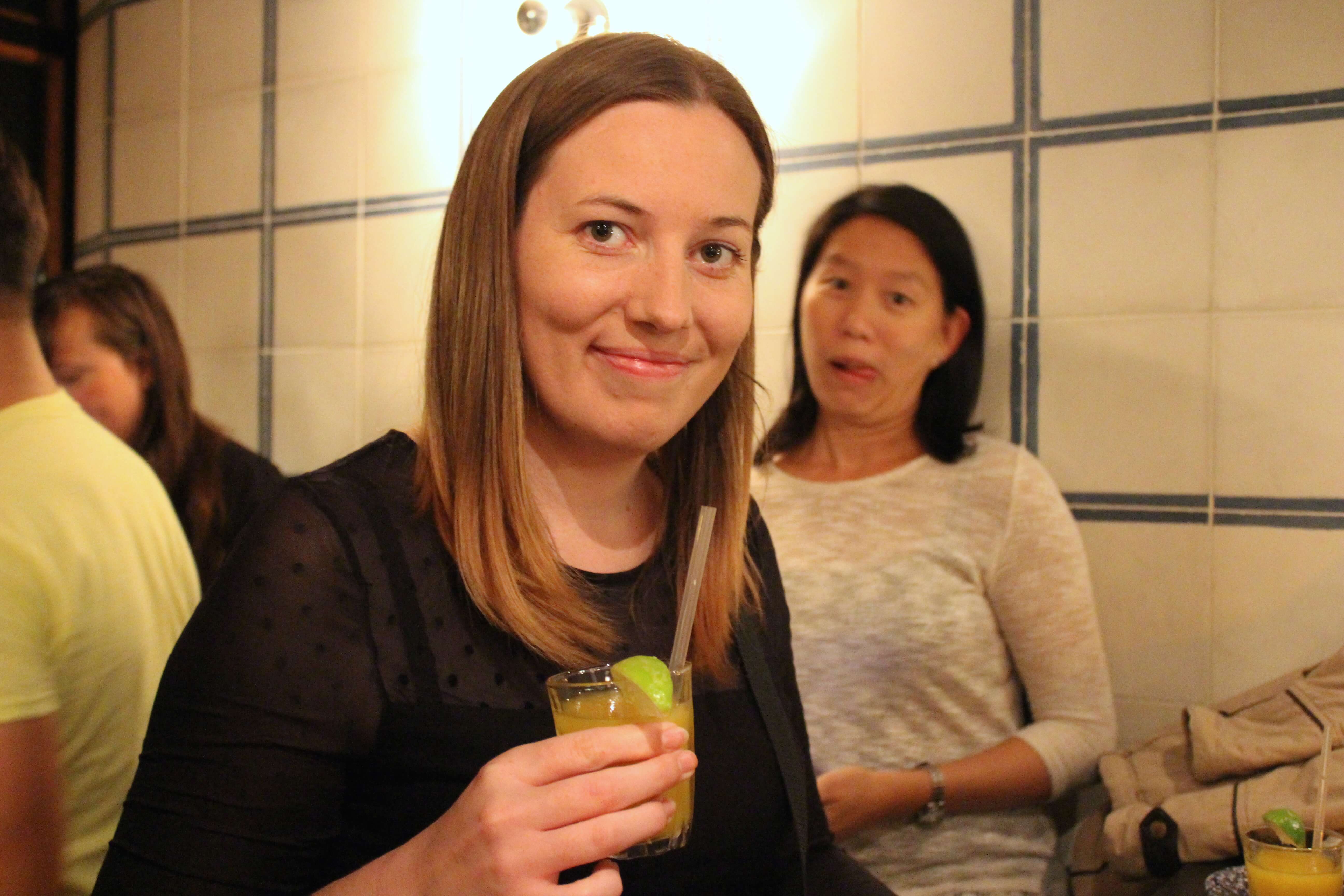 So the cocktail was a bit of a miss for me (I’m not really a spice loving girl!) but hopefully the food would make me feel better and the sight of them certainly did get me excited. Out from the kitchen came a wooden tray with several tacos lined up. It certainly looked good. 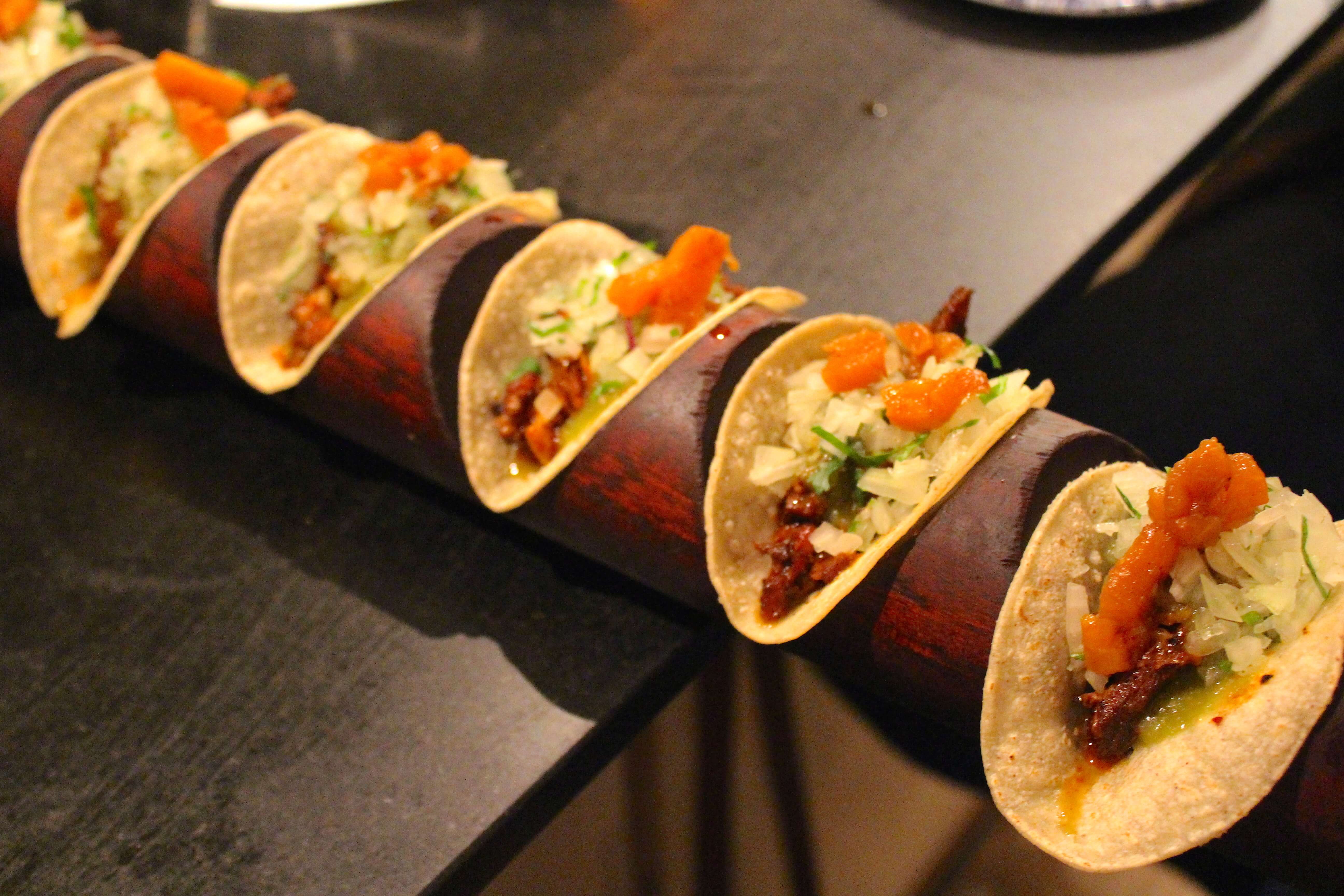 While they weren’t the easiest thing to eat I was enjoying making a mess with my tasty taco. Shortly after finishing my taco they brought out another tray although this one wasn’t as tasty for me. 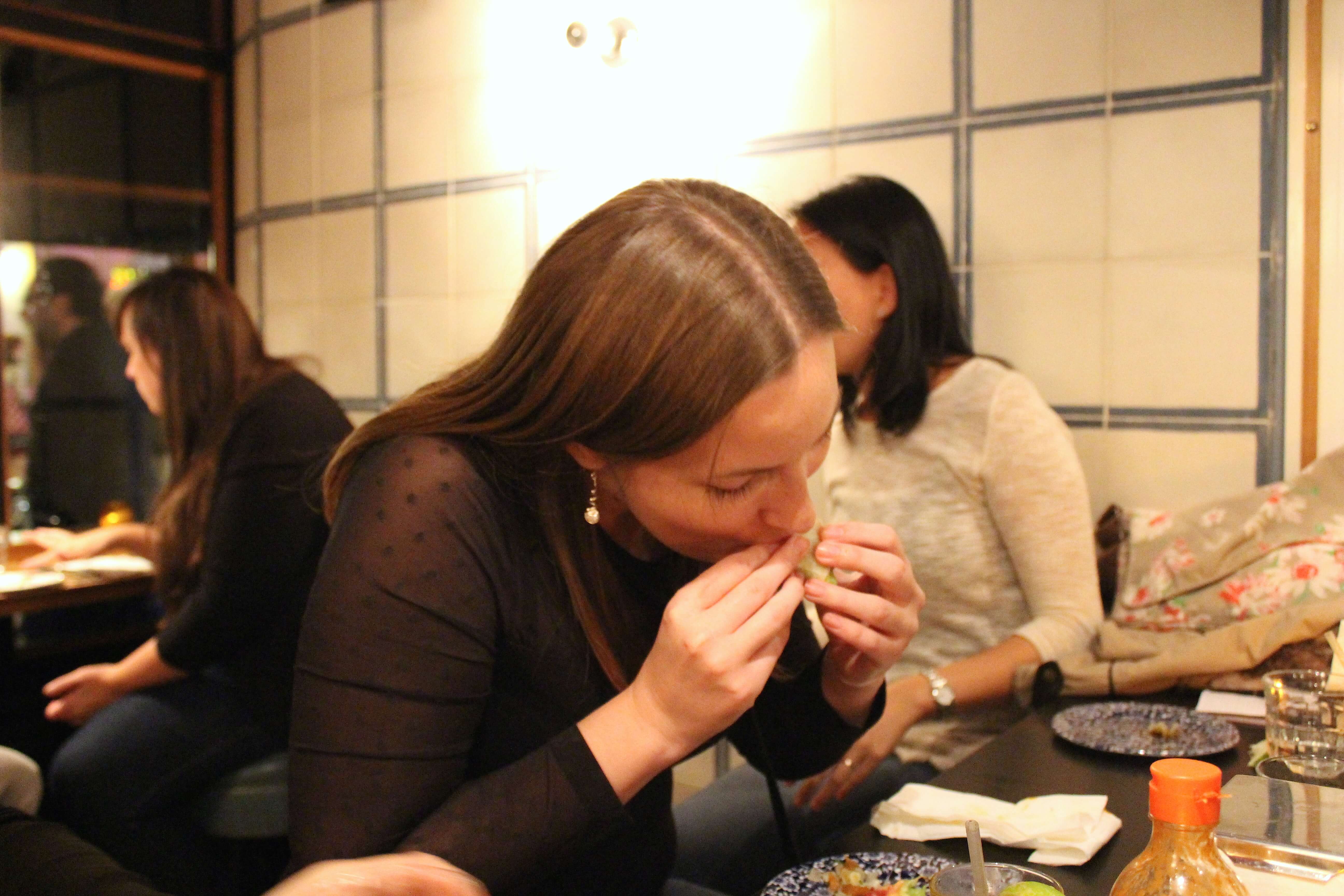 What I liked about this tour was it wasn’t just restricted to food, we also got to hear about some of the history of Soho. On our way to stop number two we headed through Soho Square where we learnt about the interesting life of Lady Teresa before having Paul McCartney’s office pointed out. Pretty cool to know!

Just around the corner from Soho Square was stop number two. I didn’t even know we had a gin club in soho so this stop was a bit of a surprise. I guess I shouldn’t have been too surprised as it’s not like I’m a gin lover searching out a good place to get gin! 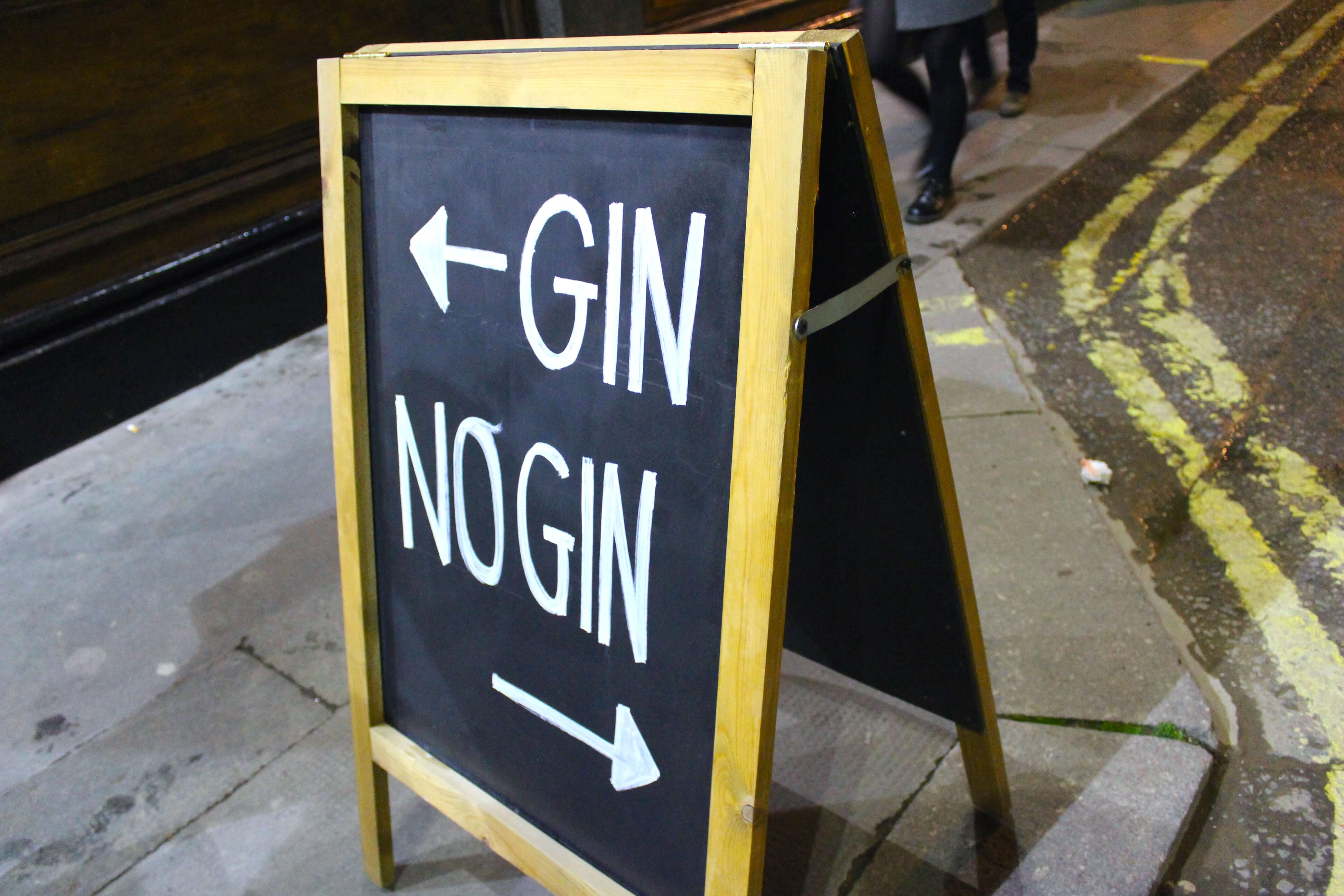 This was a good stop for me as it included a proper gin tasting experience where we were taught how to smell and taste the gin the right way to really appreciate it. To my surprise I actually really liked it. I never saw myself as a gin person but now I’m interested in trying more from this place.

After the gin tasting it was time for something to eat, it was a food tour after all! We were presented with a deliciously golden brown pie that made my mouth water while being told that what we had was a beef pie where the beef had been marinated in gin for four hours. I had never thought about cooking with gin before but the pie was absolutely delicious so maybe it’s something I should be cooking with at home. 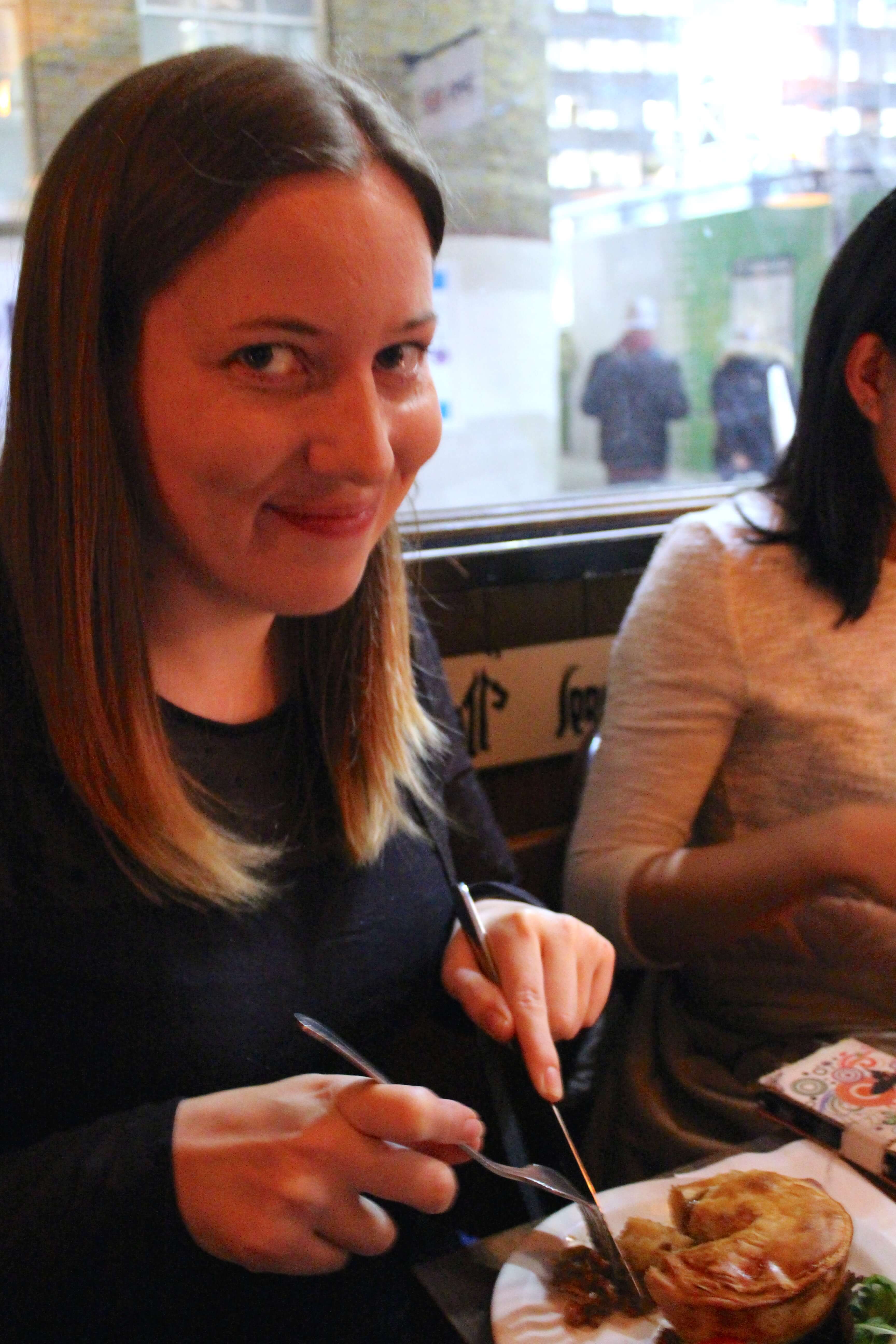 With a belly full of pie and a new appreciation for gin it was time to move on. Our next stop was a place I must have walked past a million times but had never even given it a second glance. Not because I didn’t like the look of it, but when I was in this area I was working as a post production runner so I was always in a hurry getting lunch orders or taking hard drives to clients which doesn’t give you time to stop off for ham. Yes, our next stop was for some Spanish jamon and cheese from Enrique Tomas. 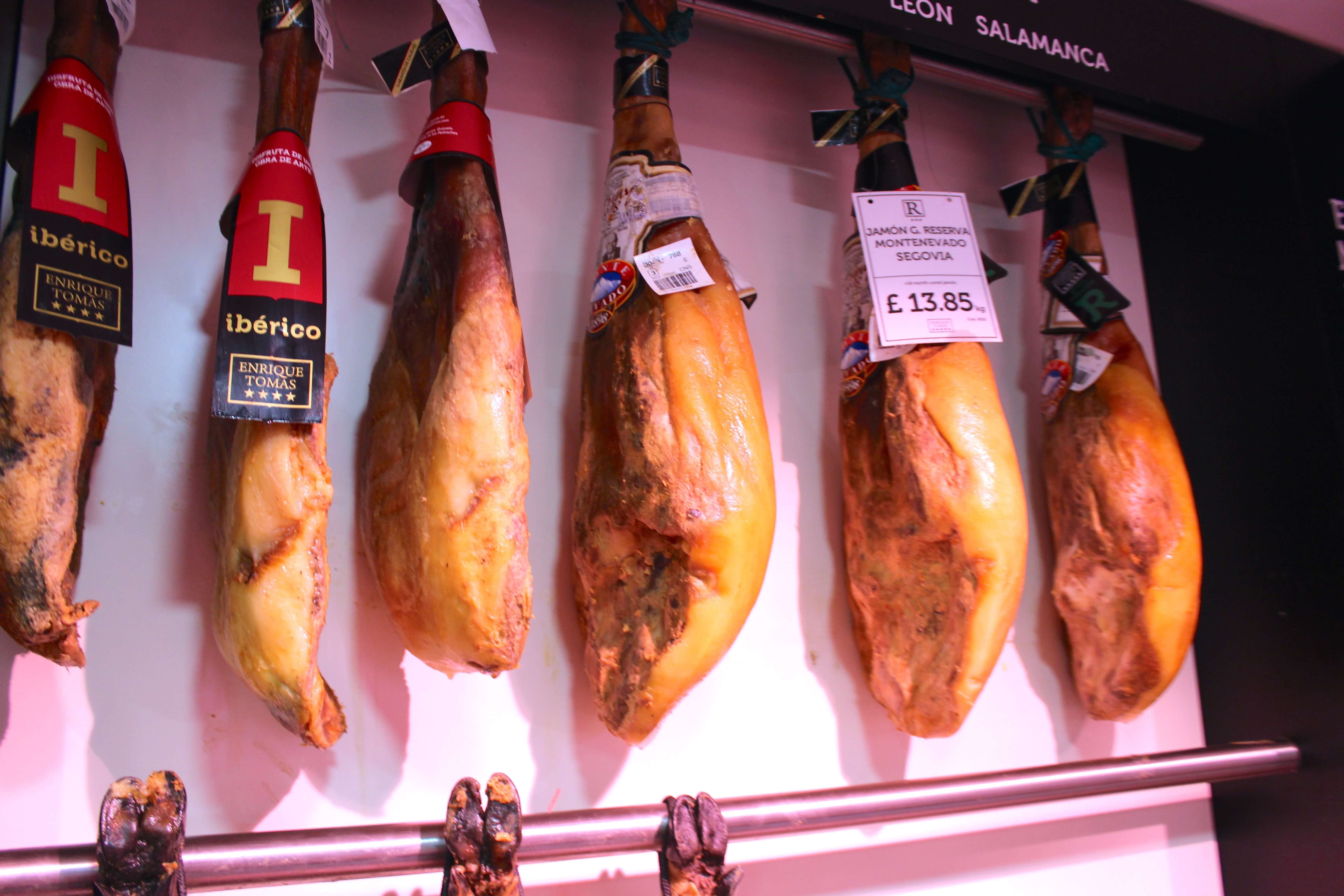 Once inside we sat down and were given a tasting dish with a variety of hams and cheeses. What I loved about this stop was we had an expert from the shop explain what we were eating. We even got to try the best jamon in the shop! And to top it off, the selection came with the best suited wines for each jamon. 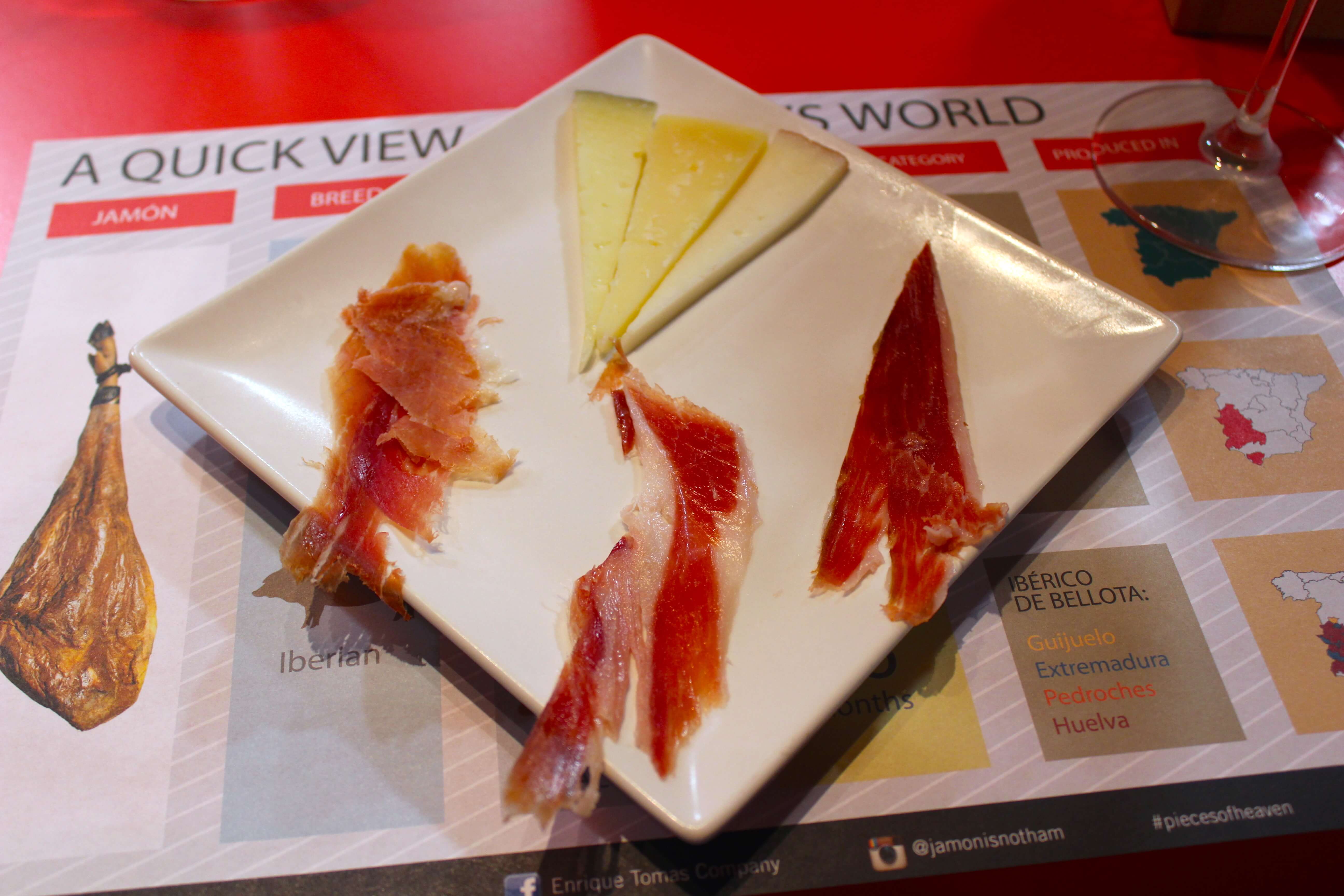 On the way to stop number four Joe pointed out what has to be my favourite sign in Soho. It’s one of those things that makes me smile every time I walk past it. But after having a little giggle at the sign it was time to head to Pix Bar for some Spanish tapas. 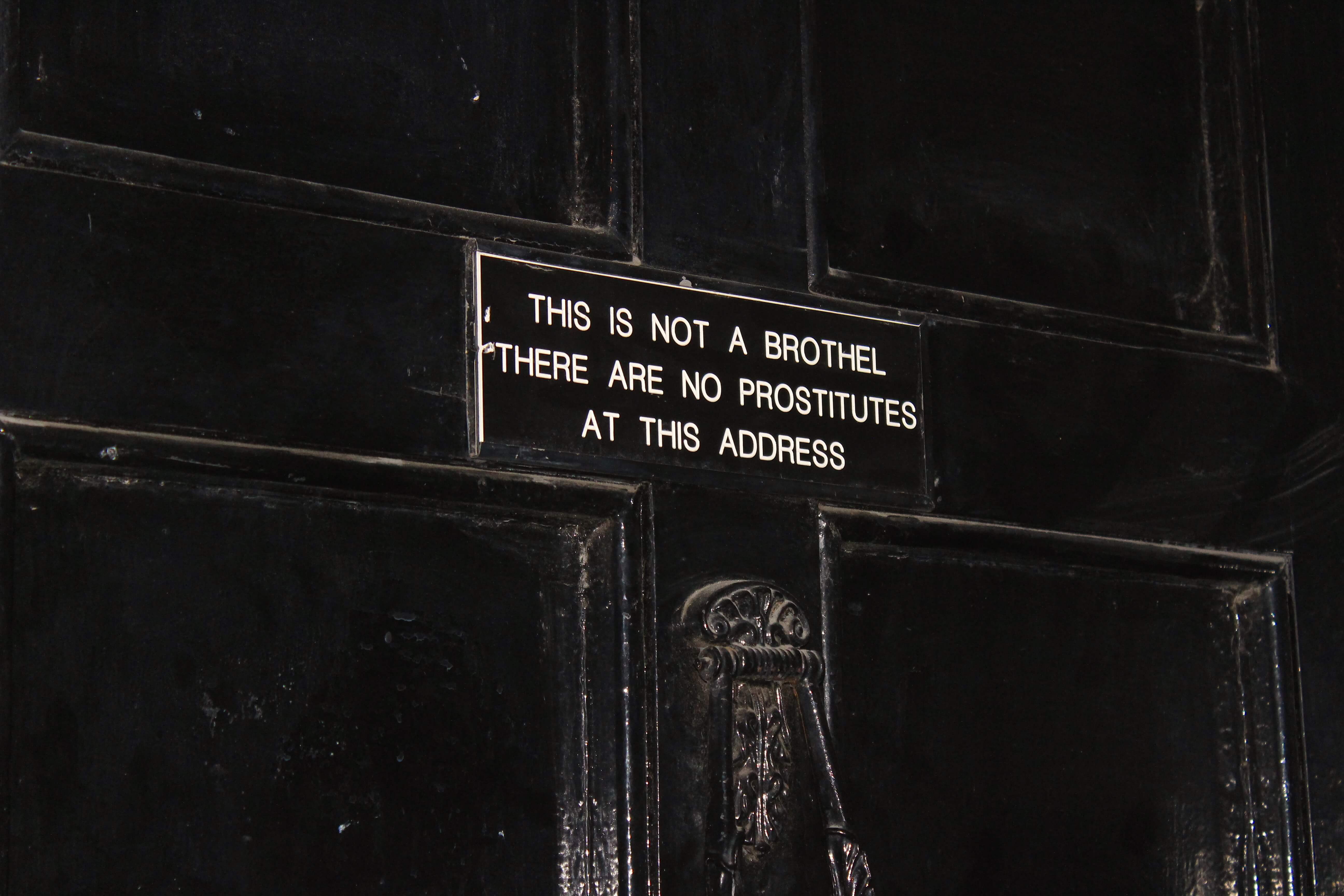 I’ve never been one for the tapas way of eating. There’s an episode in Friends where Joey screams “Joey doesn’t share food!” that makes my friends think of me. When one friend first met my ex, we had got some dinner together and afterwards she whispered to me “I knew you liked him when I saw him take food from your plate and you didn’t stab him with your fork”… yeah that’s how to measure love with me! 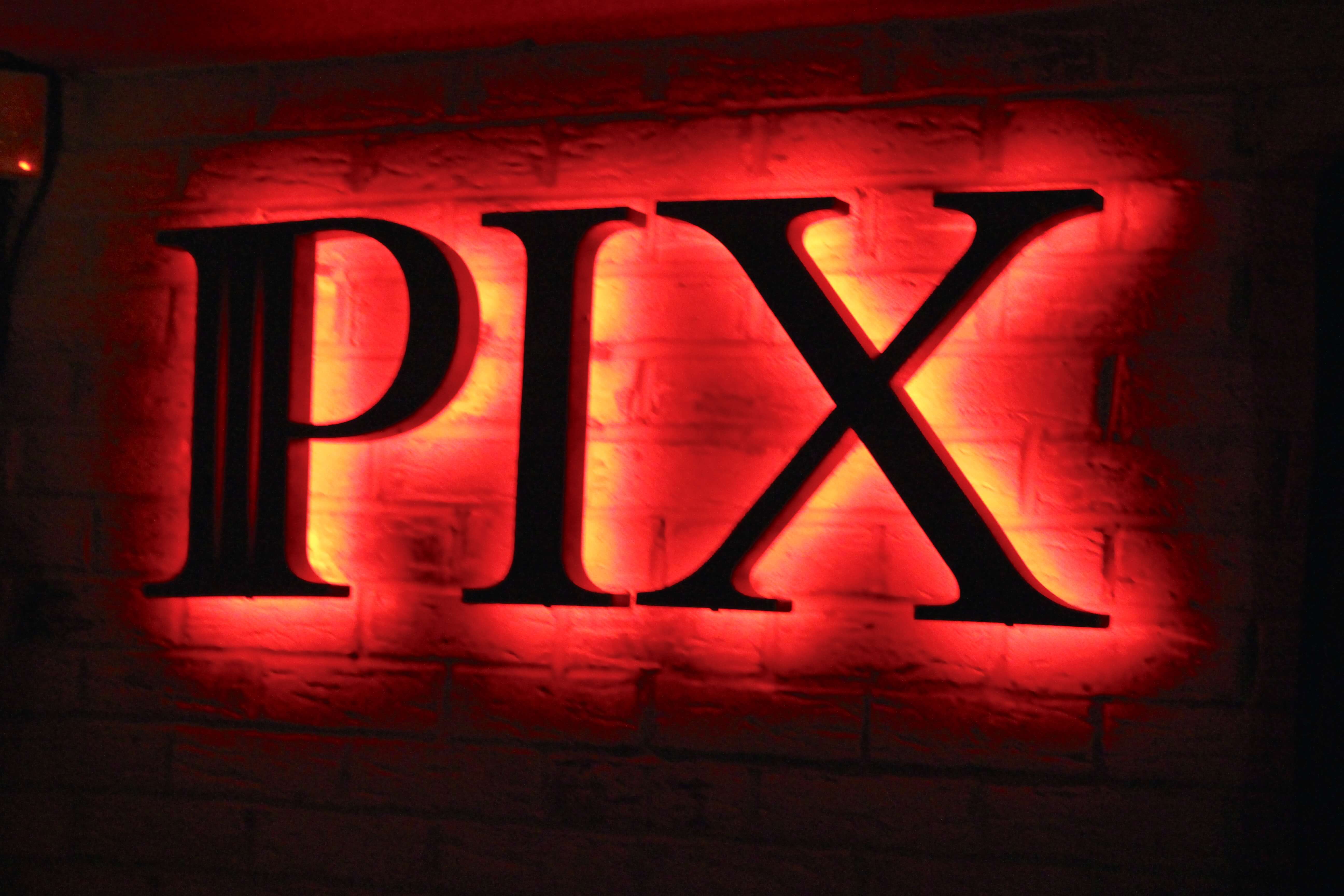 Basically what I’m saying is I’ve never been to a Spanish tapas bar because I’m a selfish eater so I wasn’t sure what to expect from our next stop. It actually wasn’t a typical tapas bar, it was a pintxos bar (hence the name Pix Bar!) and the idea of pintxos is to have small samplings of tapas through wooden skewers. It is tapas made for me because they are served in individual portions. 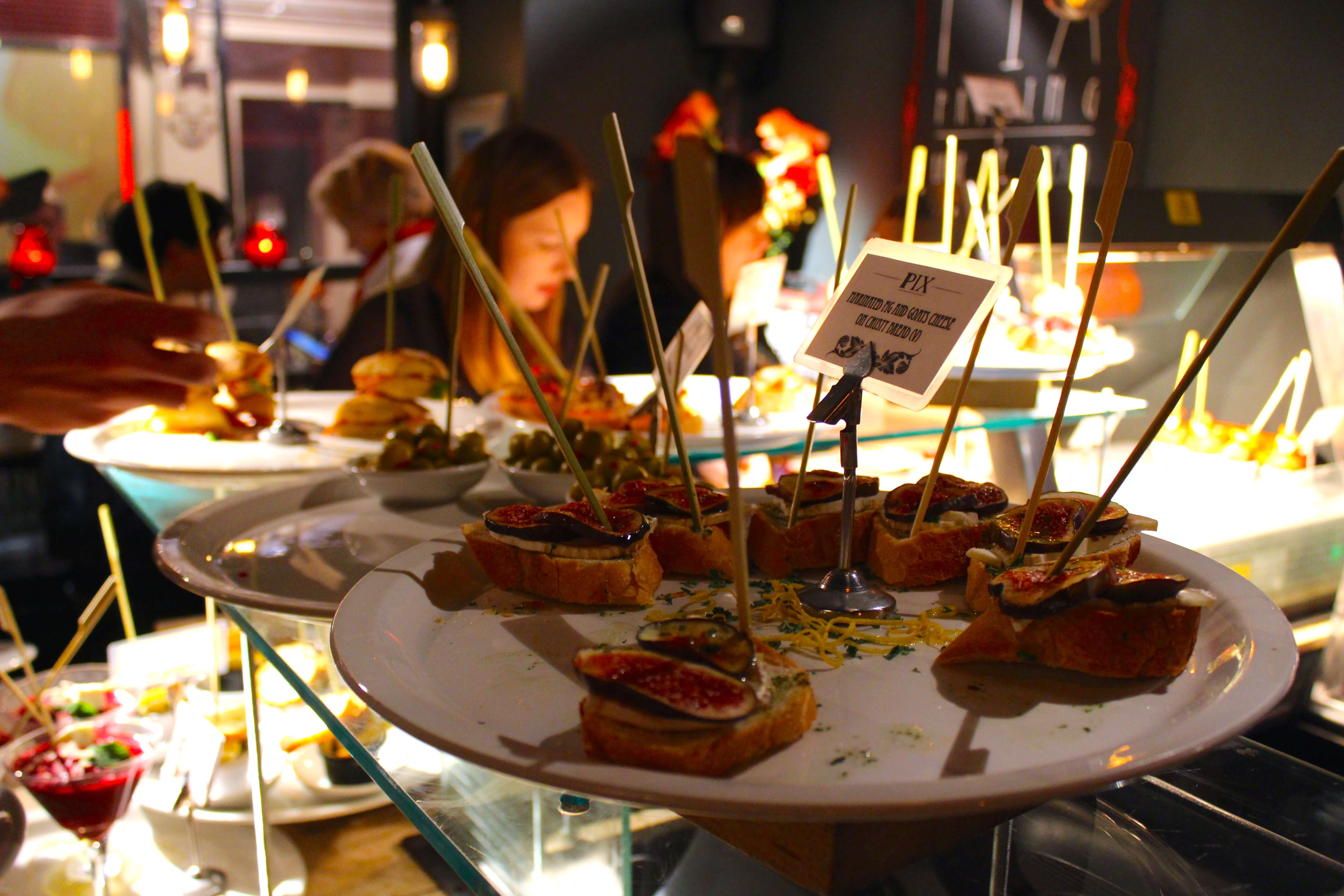 At Pix Bar the skewers of food are lined up in trays along the bar and you help yourself to what you want with each skewer representing a different price. You then simply pay at the end. Similar to a lot of sushi places. 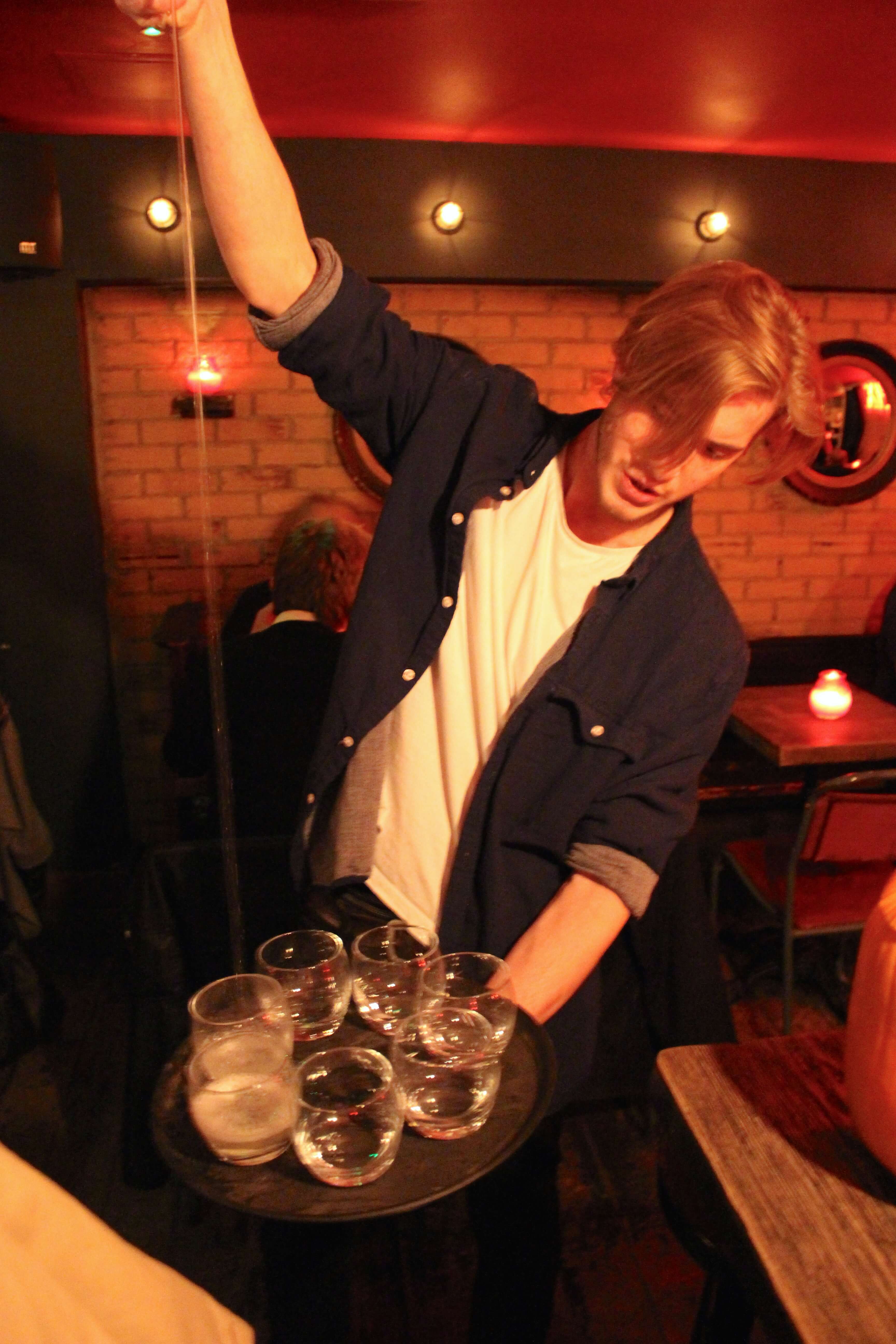 As this was a food tour we were limited to two skewers so the decision was not one to make lightly! After careful consideration I went with the deliciously crispy breaded cod ball and the bread with ham and quail egg. I’d never had a quail egg before so I was very excited by this one and I was not let down by either choice. 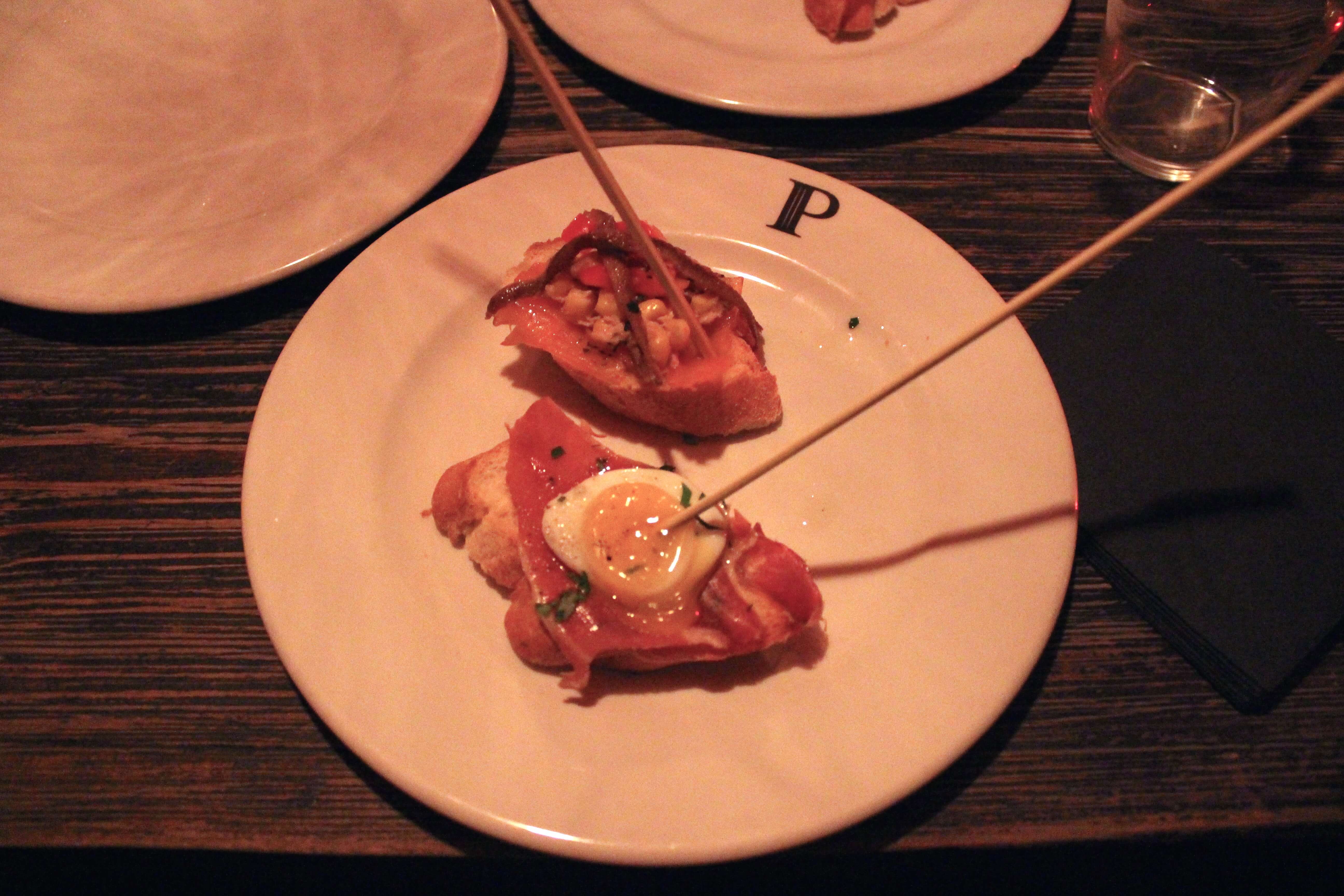 On the way to stop number five we had another piece of Soho’s history pointed out to us. Where Bar Italia is now, John Baird first demonstrated television in his laboratory on Frith Street. Interesting for me since I work in television! 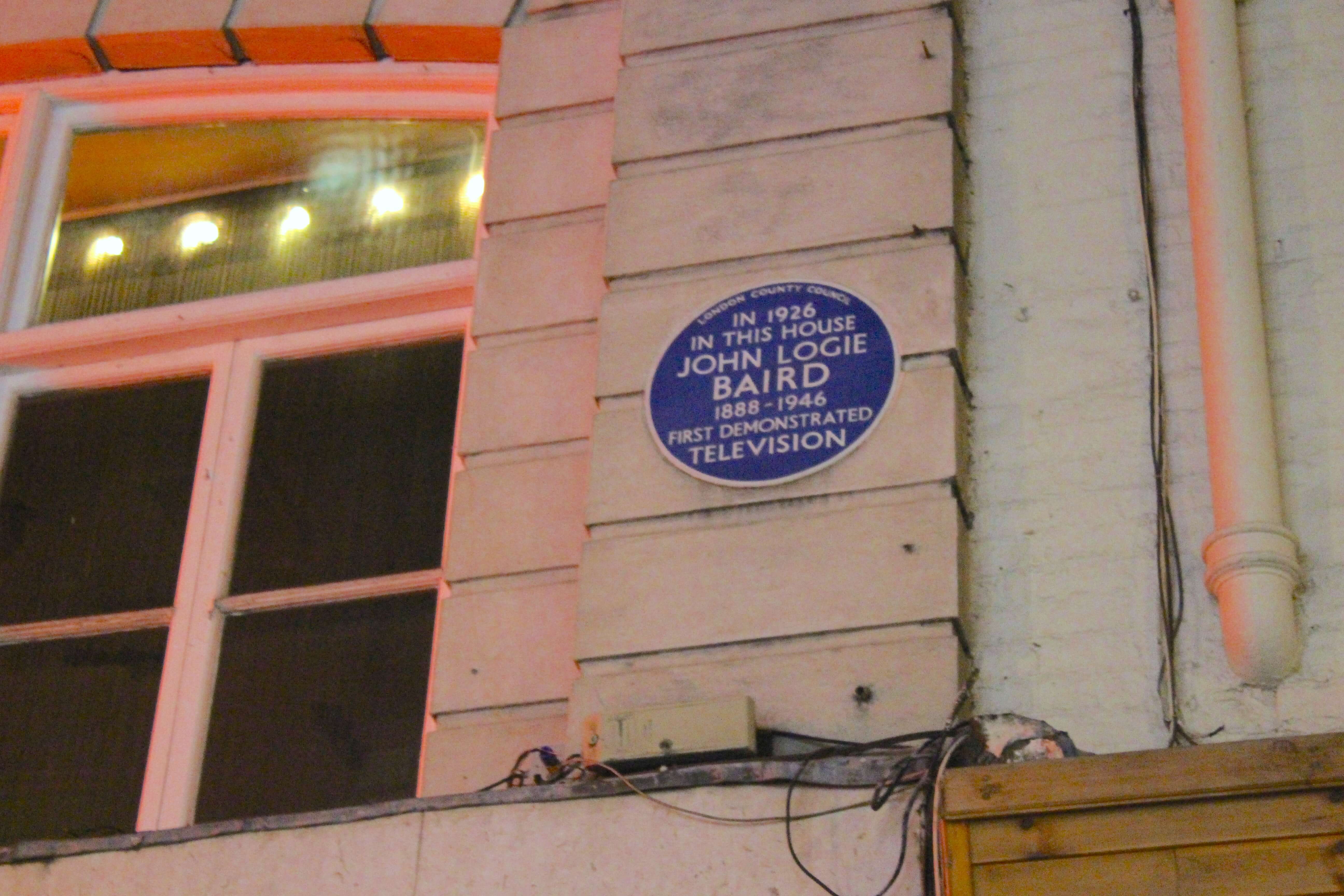 I must admit, our next stop had me worried. I’ve been out to dinner in Chinatown before but I’ve never enjoyed the food I’ve had there. It always felt too touristy and not authentic which is why I avoid the area now. So when we made our way through the lantern covered streets I wondered what the next meal would be. Could this be the stop that brings this food heaven back to reality? I hoped not! 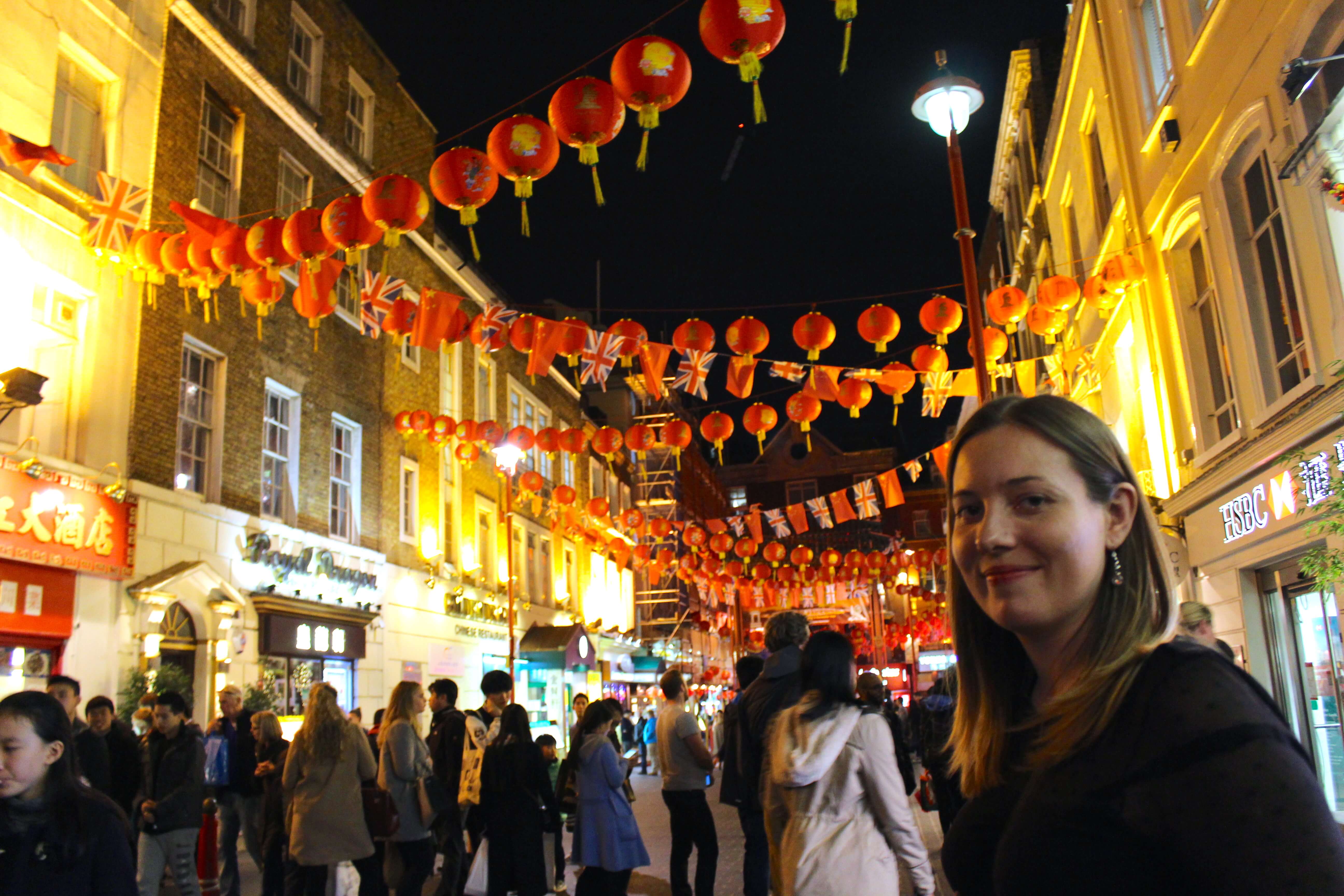 I almost didn’t spot our next stop when Joe gathered us together but just behind a bouncer with an awesome hat was the almost hidden door to Opium. Designed to be like a smoking den, you enter up the darken staircase unsure where it will lead you. 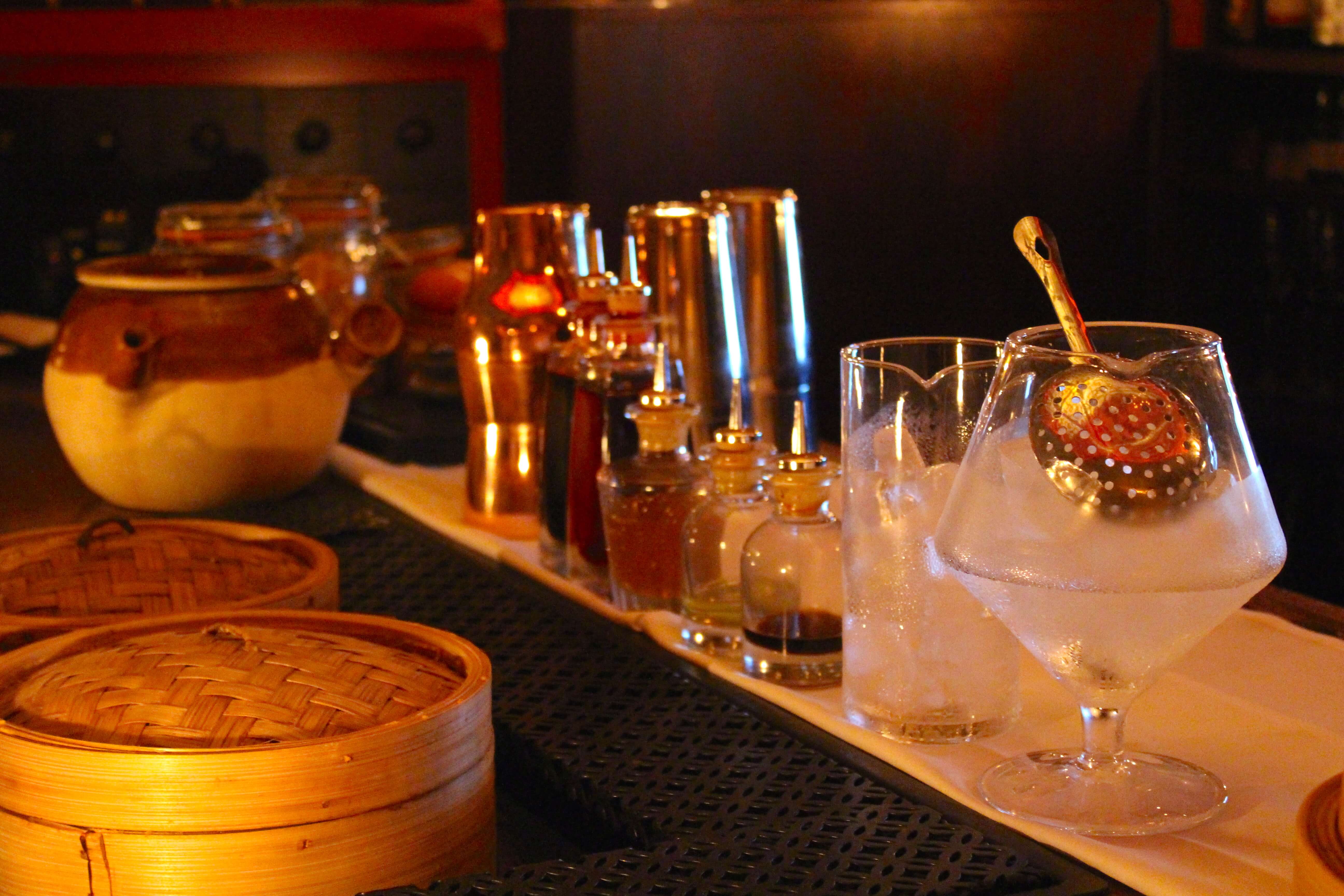 Where it does take you to though is a place that has the most amazing dumplings I’ve ever tried! The first one we tried was crab and samphire and were the best dumplings for all of a few minutes until I tried the mushroom and truffle dumpling… I was in heaven eating that. I had been so wrong about the food in Chinatown! 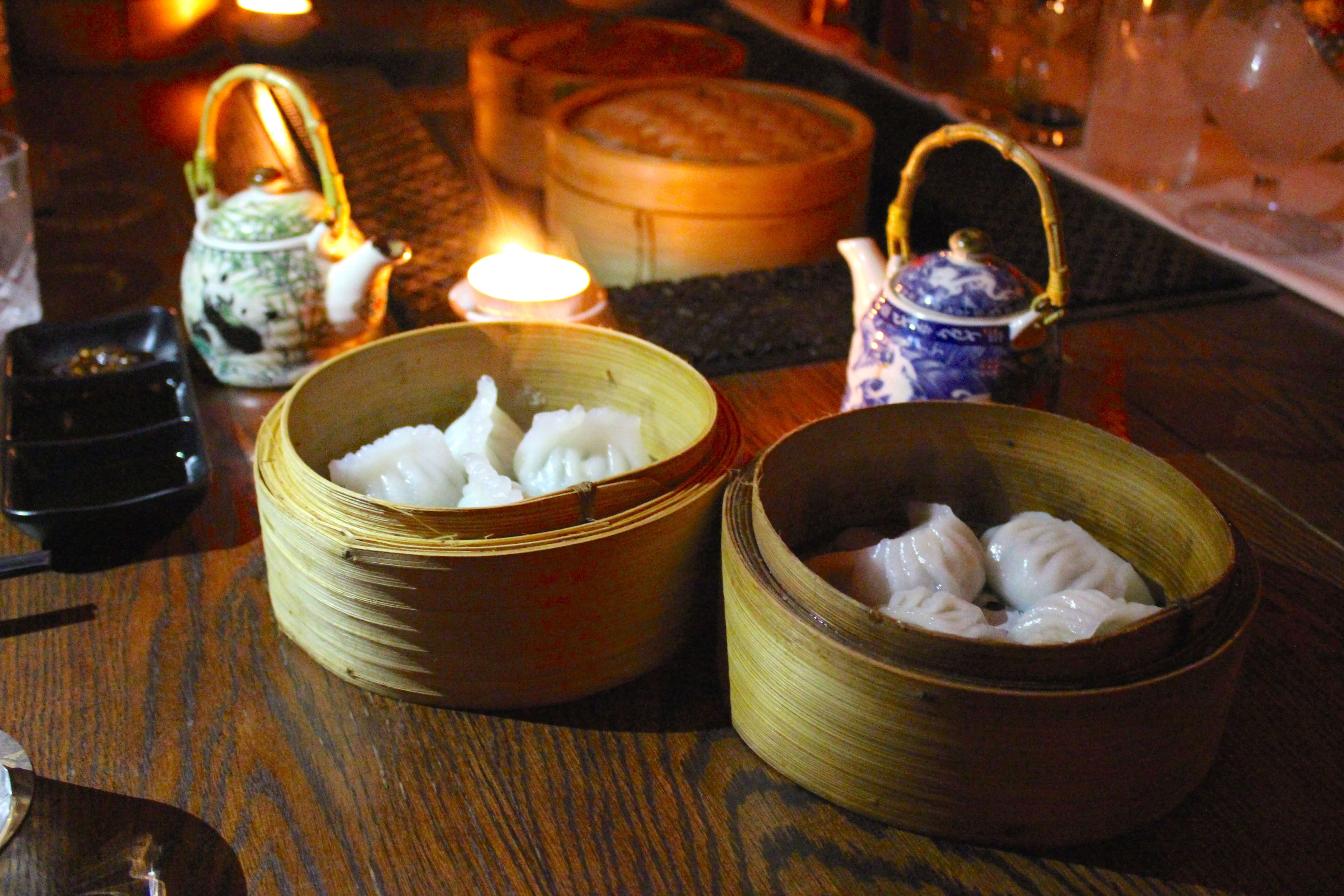 The delicious dumplings were then finished off with some tea. While the first was quite smoky and not to everyone’s liking, the second was filled with aromatic flavours that made me wish I had more! 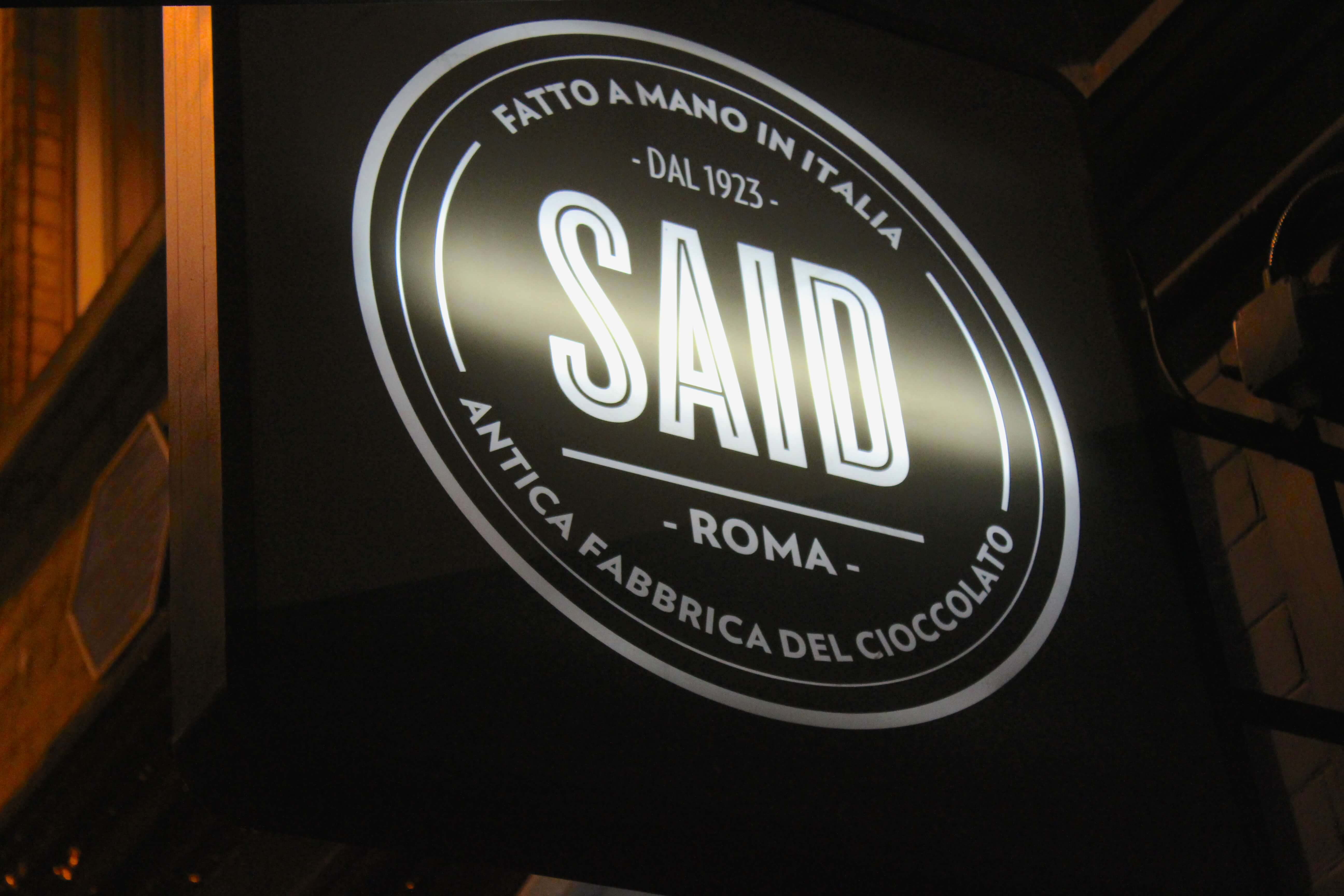 But no dinner is complete without something sweet so our food tour ended at SAID and just like with every other stop, this chocolate shop did not disappoint. Originating from Rome , this family business opened up a shop in Soho so we may also enjoy their delicious product. 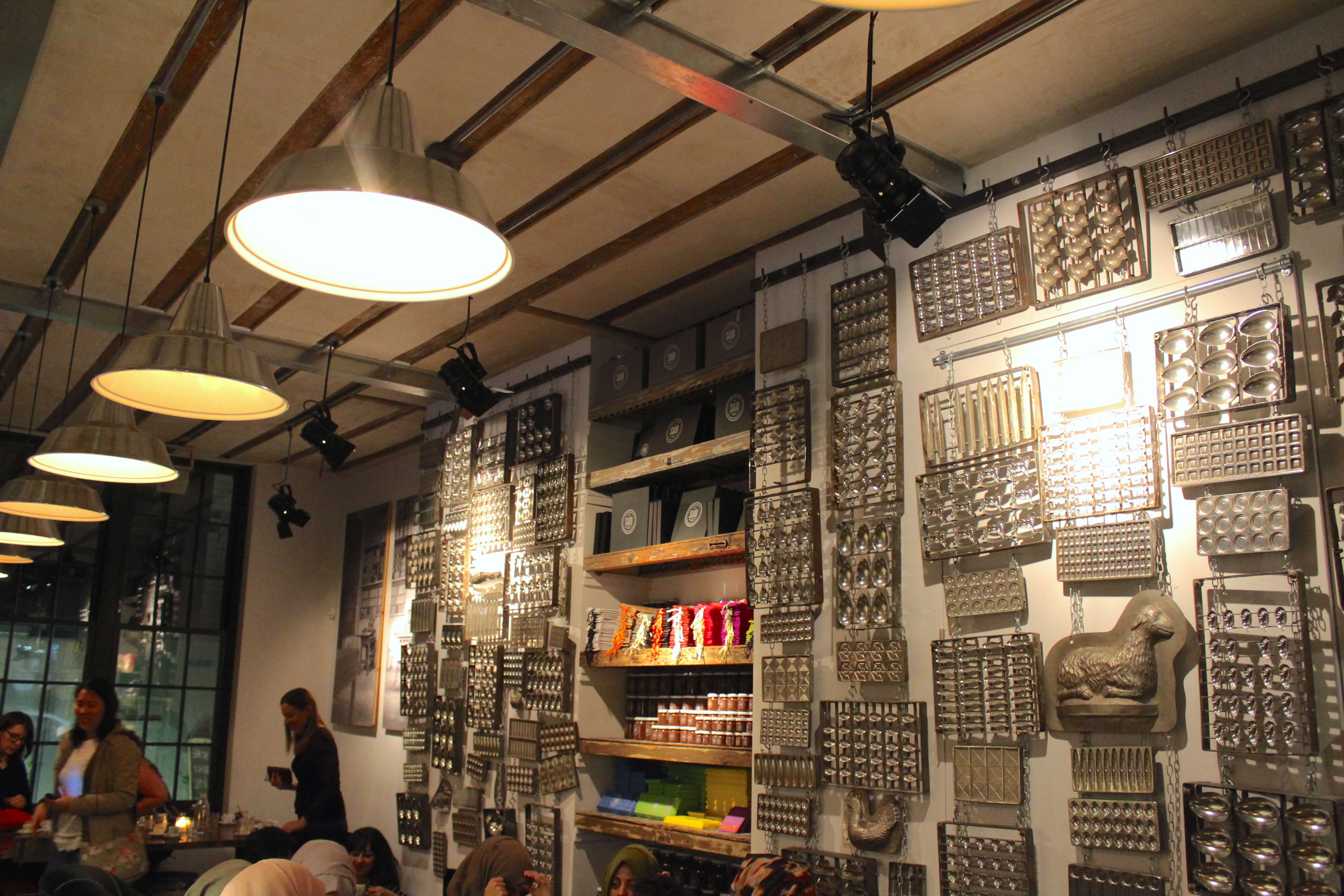 I fell in love with this place just from stepping foot in the door. The wall was covered with old cooking equipment and the counters are decorated with milk bottles and jars full of chocolate. I felt like I was in the chocolate shop from Willy Wonka! Except this place was even cooler with its milk barrel seats. 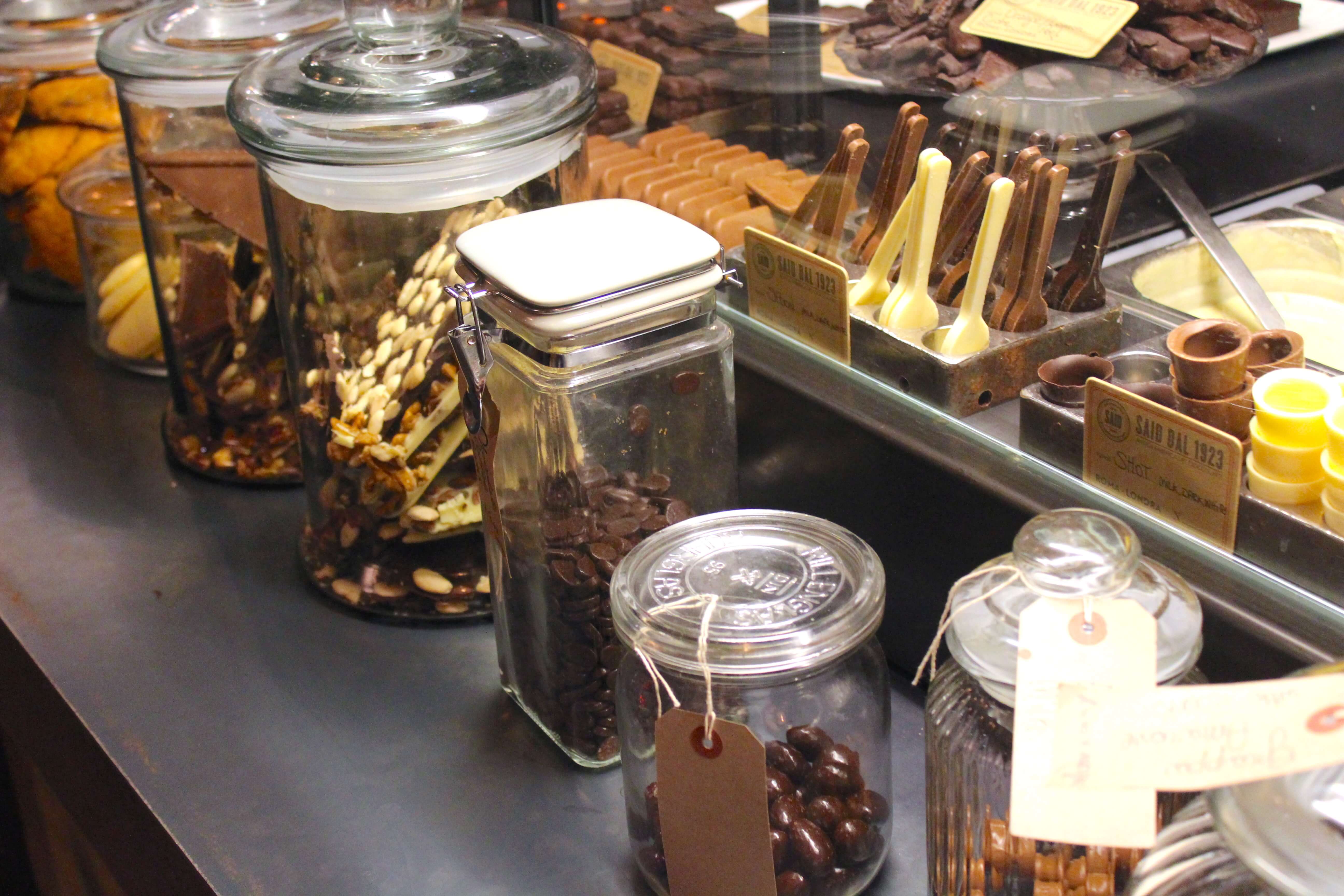 At this final stop we enjoyed the delights of a SAID hot chocolate, which unlike other hot chocolates, wasn’t made with cocoa powder but was made with real chocolate. We had the option of milk or dark chocolate. I couldn’t resist sampling the dark chocolate and let me tell you if you are a chocoholic you will love it. I’m not quite the chocolate fiend I once was so I was grateful to have a small sampling but the taste was something unique and out of this world.

And if that wasn’t enough of a good end to the tour there was more! As well as the hot chocolate we were treated to a tiramisu which was light and delicious. That I could have happily had more of! 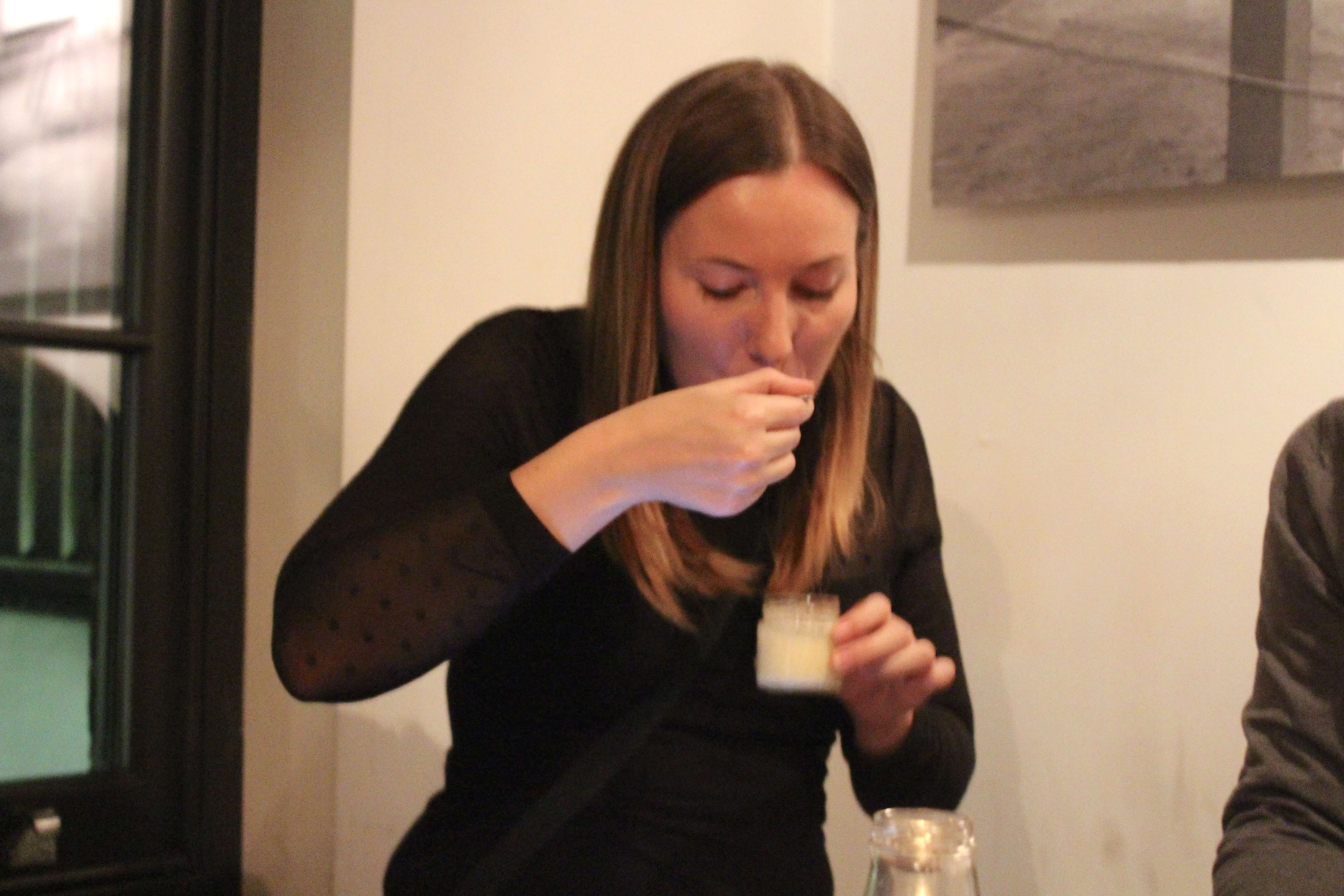 If my tale has left you wanting to experience this amazing food tour for yourself you’re in luck as they run every Tuesday to Friday evenings so lots of opportunities. Each tour will last 3.5 hours and will have no more than 12 people in each tour group so a nice small number. Right now the tours are only held in English but food is a universal language so if you’re English is limited I’m sure you’ll be fine.

If my tale has left you wanting to experience this amazing food tour for yourself you’re in luck as they run every Tuesday to Friday evenings so lots of opportunities. Each tour will last 3.5 hours and will have no more than 12 people in each tour group so a nice small number. Right now the tours are only held in English but food is a universal language so if you’re English is limited I’m sure you’ll be fine.


If that wasn’t enough, Eating Europe also have tours in Rome, Prague, Amsterdam and Paris. I’m tempted to jump on a plane just to try these tours out too. Yes it really was that good!

Need more inspiration for your trip to London? Why not check these out:

Like food tours? Here are some other food tours I’ve done around the world

Please note that while I was working with Eating Europe, the reviews and experiences written about in this post are 100% genuine. I value you guys too much to lie to you. This blog would be nothing without you and your continued support! 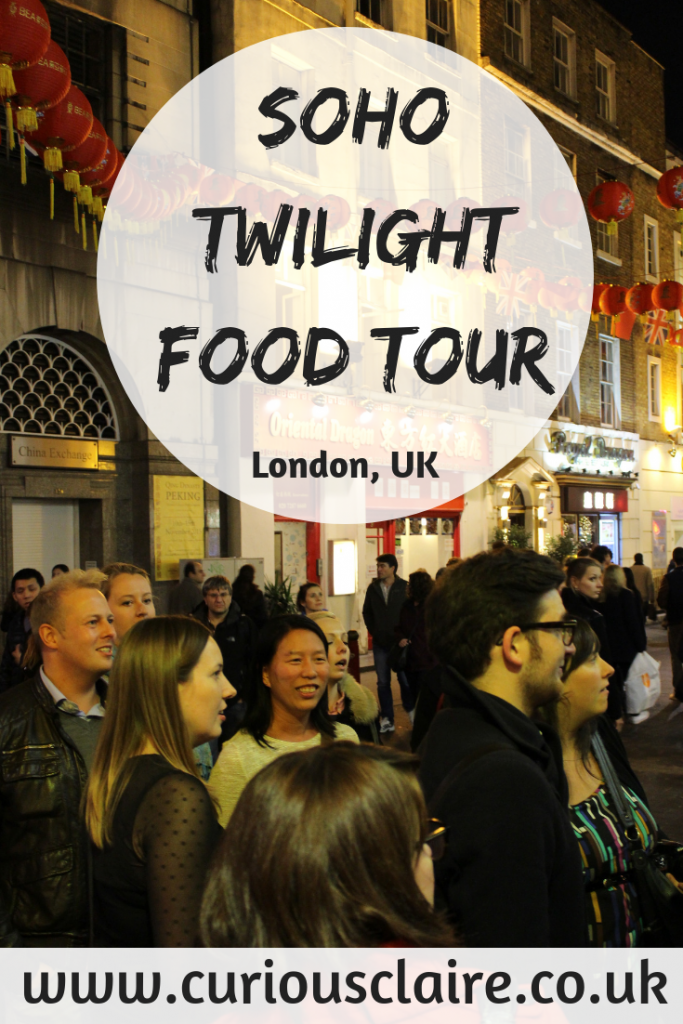